Arielle, (Thorne) who dreams of bigger things and Instagram followers, and her new ex-con boyfriend Dean (Manley) come from broken homes in a small town in Florida. They both go on the run after Dean's abusive father is accidentally killed during one of their fights. They hit the road committing a few robberies along the way, and live streaming their crime capers. Arielle's an instant hit on social media with millions of followers which emboldens her to commit more crimes including murder.

See Drive-Ins Where INFAMOUS is Playing

Thorne's Arielle is not particularly likable in that she's superficial, entitled and has no regard for human life. She doesn't grow a conscious nor see the errors of her ways. In contrast, Dean is grounded and realistic about the implications of posting their criminal escapades online. This creates chaos between the two and leads to arguments as they run from the law across the southland. While you may not be rooting for their escape from the law, you are invested in the outcome so Arielle gets her just rewards.

The messaging behind INFAMOUS is obvious. Caldwell, the director and writer, clearly is making a statement about how social media warps young minds by equating the number of followers to your self-worthiness. Arielle emphasizes her sexuality as she holds a gun for selfies. Is that the only way people find her interesting? Dean doesn't understand her obsession with going viral because he's not online. That idea is further cemented when the young lovers car jack a young woman played by Amber Riley ("Glee") who eventually asks if she can tag along their adventures because she leads a dull life.

As Arielle, Thorne seems at home playing the bad girl much like her public image minus the crime capers. She has a lot of fun in the role, and exudes sexy chemistry with costar Jake Manley. 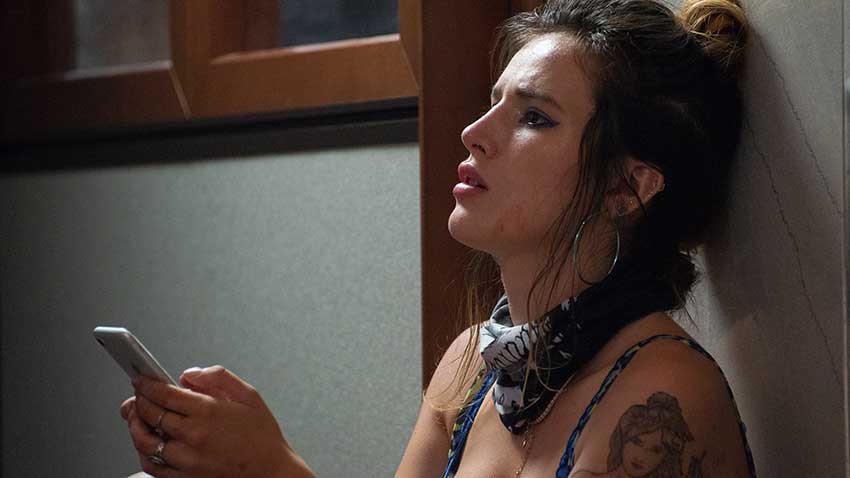 INFAMOUS is not a great film, and sometimes glamorizes the violence, but it is interesting in what it has to say through the action. It's somewhat a grim commentary when you see a young person feel like she's meant for something great but her definition of greatness equals a social media influencer.

Vertical Entertainment will release the new movie in drive-ins, VOD/Digital and Virtual Cinemas on June 12. INFAMOUS is the perfect film to watch at a drive-in, and luckily the studio is giving it a wide release. See the locations here.