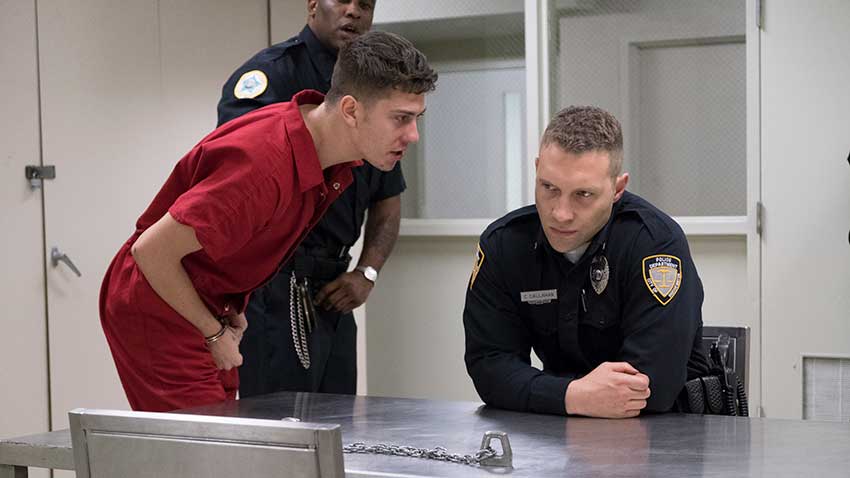 SEMPER FI doesn’t know what it wants to be. The testosterone-fueled melodrama turns into a prison break movie.

In director Henry-Alex Rubin’s statement about his reasons for making the movie, he says his inspiration came from the U.S. Marine motto, Semper Fidelis which means always faithful or loyal. However, what we get is a frat-mentality with a bunch of rowdy guys who drink, party and pick up girls at bars. While there’s a camaraderie among the men, it never reaches bromance level nor is their friendship really put into question or to the test. There is some conflict when Cal busts his own brother for a brawl that leads to a man’s death, and his friends question his loyalty but it gets dropped quickly.

Co-written by the director and Sean Mullin, SEMPER FI is a misleading title for a movie that focuses primarily on the relationship between Cal and his younger sibling. They have a strenuous relationship with Cal constantly looking out for the troublemaker. Cal’s tough love doesn’t sit well with Oyster who feels his brother loathes him. Courtney delivers a solid performance as the tormented brother but Nat Wolff calls it in for the second half of the film. At the start of the film, Wolff certainly plays it up as a screw up who doesn’t respect much, but when he’s sent to jail, he’s devoid of any feeling. There’s no emotion from him when he’s beaten up by the prison guards. He’s like “whatever” but you keep hoping he’ll react to the tragedy that is his life but it never happens. In one scene, Courtney seems to be pulling all the weight with Wolff continuing his “whatever” mode when they’re having an argument in prison. That scene should’ve been compelling but the on-the-nose dialogue and one-sided effort made it the opposite. The director dumps all the information we need about their past in that scene, but we should’ve seen it rather than get a verbal summary of their lives.

That’s another issue with SEMPER FI - the story is told to us rather than in the action. For example, Oyster receives a long sentence although he acted out of self-defense, but it is also his third strike. When Cal returns from the Iraq war, he finds out the D.A. coerced a witness to lie on the stand. Instead of playing that out on the screen, characters merely tell the viewers this happened. Oyster’s story would’ve been more compelling if viewers were part of the process during his trial. You never really feel Oyster was wrongly imprisoned or feel compassion for his plight. He never takes responsibility for his actions, and blames his brother for all his troubles. You really don't care what happens to him because he doesn't care.

Arturo Castro (“Alternatino”) and Finn Wittrock (“American Horror Story”) don’t have much to do except be one of the guys. The extremely talented actors waste their gifts playing second fiddle. Leighton Meester is also underutilized with her character merely popping in to supply information. There’s a love story between Meester’s character and Wittrock’s inserted near the climax that felt abrupt.

The movie doesn’t get interesting until the third act when the group of friends plan to break out Oyster. After the novela drama, SEMPER FI turns into an action film when the boys use their soldier skills for the rescue mission. Then the film is over.

There are no real stakes in SEMPER FI, and it feels as if key scenes may have been left on the cutting room floor.

SEMPER FI is in movie theaters and On Demand now.