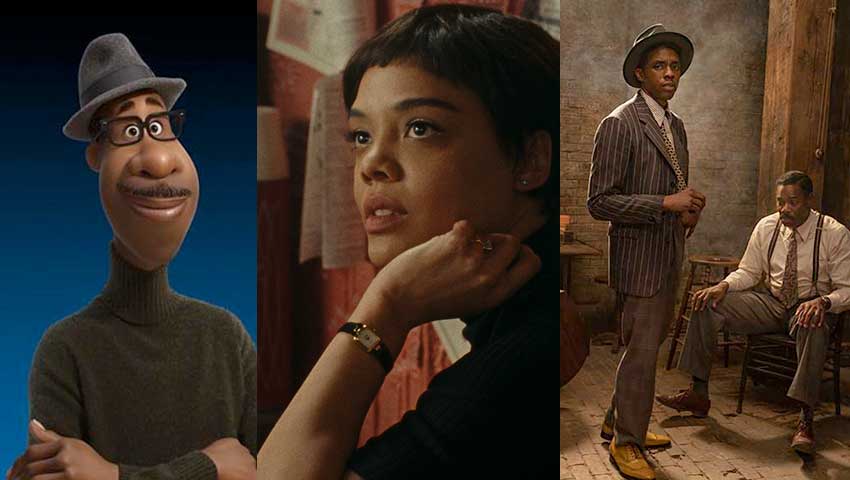 The theme for 2021's Black History Month is “Black Family: Representation, Identity and Diversity.” When it comes to film and television, there have been strides with 2020 being a great year for movies starring black actors, made by black filmmakers. More films were directed and written by Black Americans than ever before, and many of them are in the running this award season. Below are the 14 current films you can stream online.

The 'Oscars So White' hashtag a few years back prompted a discussion about diversity in movies especially around representation during award season. In 2020, a record number of high-profile films were released that reflect the Black experience throughout history. Spike Lee's DA 5 BLOODS examines black Vietnam soldiers and veterans. In Regina King's ONE NIGHT IN MIAMI, five iconic black men discuss what it means to be a successful black man in the 60s, and in JUDAS AND THE BLACK MESSIAH, we meet Black Panther Chairman Fred Hampton who was assassinated by the Chicago police on orders from the FBI. There's also a sweet love story, the first Pixar*Disney movie with a black lead and so many other groundbreaking films.

JUDAS AND THE BLACK MESSIAH is not only entertaining but educational with a fabulous ensemble and standout performances by Daniel Kaluuya and Dominique Fishback. The film dispels much of the negative perception of the Black Panther party as simply a radical militant group which the FBI categorized as a terrorist organization.

ONE NIGHT IN MIAMI (Amazon Prime)
Regina King takes to the director's chair for her second feature film with ONE NIGHT IN MIAMI starring famous figures from the 60s - Muhammad Ali, football player Jim Brown, Malcolm X, and the King of Soul Sam Cooke.

With a script from Kemp Powers and based on his stage play, King delivers a powerful and compelling movie that delivers on all fronts including the ongoing conversation about social injustices and the role of the Black man.

The movie has already received numerous award nominations for King, the screenwriter and the actors.

DA 5 BLOODS (Netflix)
Spike Lee directs this Netflix film about four African-American vets who return to Vietnam seeking a long lost treasure and the remains of their fallen squad leader (Chadwick Boseman). The film flashbacks to their time in the war and the challenges they faced past and present.

With a stellar cast that includes the late Chadwick Boseman, Delroy Lindo, Clarke Peters, Norm Lewis, Jonathan Majors (Lovecraft Country) and Isiah Whitlock (The Wire), DA 5 BLOODS is an intense drama that provides insight into what Black soldiers had to contend with when fighting for a country that discriminated against them during the Vietnam war, and the PTSD suffered by the men many decades later.

MA RAINEY’S BLACK BOTTOM (Netflix)
Adapted from a theater play and produced by Denzel Washington, MA RAINEY'S BLACK BOTTOM takes place in a recording session in 1920s Chicago when tensions rise between legendary performer and "Mother of the Blues," Ma Rainey (Viola Davis), her band and the white management. Chadwick Boseman plays an ambitious horn player wanting to leave his own mark in the music world.

Viola Davis and the late Chadwick Boseman are outstanding in the film, and both are in the running for numerous awards in the Best Actor category.

ALL IN: THE FIGHT FOR DEMOCRACY (Amazon Prime)
The voter suppression documentary is the best one this past year.

Featuring Stacey Abrams, ALL IN: THE FIGHT FOR DEMOCRACY chronicles the historical practices of voter suppression right after the Civil War to the current climate of extreme threats to our basic rights as citizens of the United States. The story is told through old footage and recreations through animation along with historical experts description of the century long suppression tactics.

Senator John Lewis' 60 plus years of social activism and legislative action in Congress is captured in a new documentary, JOHN LEWIS: GOOD TROUBLE. The film directed by Dawn Porter chronicles his early life as a sharecroppers son, his fateful meeting with Dr. Martin Luther King Jr. in 1957, his training as a Freedom Rider fighting for equality to the present during his campaign tour to help new incumbents.

Films addressing racial adversity throughout history were plenty but there were other options for movies with black leads in love stories and other themes outside the civil rights issue.

Jamie Foxx voices the first black lead character in a Disney*Pixar movie with SOUL. Joe Gardner, a jazz pianist and music teacher, finally scores a gig when tragedy strikes and he's trapped between Earth and the afterlife.

As usual, Pixar will give you all kinds of feels with relatable themes that asks each one of us what our purpose is in life.

SYLVIE’S LOVE (Amazon Prime)
Tessa Thompson (THOR: RAGNAROK) and Nnamdi Asomugha start a summer fling in 50s Harlem but they can't quite each other whenever they meet again across a few decades.

Director/writer Eugene Ashe pays homage to classic love stories like AN AFFAIR TO REMEMBER. The film's main characters are successful black professionals which is not often portrayed in movie from that time period, and a beautiful love story in the spirit of classic romances.

THE 40 YEAR OLD VERSION (Netflix)
Radha Blank plays herself in the Netflix movie as an down-on-her-luck NY playwright going through a mid-life career crisis as she approaches 40. She turns to rapping as a form to express herself but she's given a chance to produce one of her plays, but she compromises her artistic vision out of desperation.

While I have not seen this film, the film ended up on many of my colleagues best film of 2020.

MALCOLM & MARIE (Netflix)
Zendaya and John David Washington star in Netflix's MALCOLM & MARIE. Written and directed by Sam Levinson (Euphoria), filmmaker Malcolm and his actress girlfriend Marie arrive home after Malcolm's successful movie premiere. He's about to become a big deal, but Marie doesn't share in his excitement. When Malcolm insists she tell him what's the matter, a war of words begins. Whatever is bottled up between them comes up in an all night fight session.

The black and white film takes place entirely in a lavish glass house that allows the viewer to feel like a voyeur into their relationship. The couples movement around the luxurious home keeps the movie flowing nicely so as not to bore you with the single setting.

While most will relate to the relationship in turmoil, sometimes the subject of their discontent may be too inside Hollywood for some. There may be some disconnect between the couple arguing over whether she had influence on his work as his muse.

MALCOLM & MARIE is an interesting experiment using one setting in a black and white presentation.

JINGLE JANGLE: A CHRISTMAS STORY (Netflix)
An imaginary world comes to life in a holiday tale of an eccentric toymaker, his adventurous granddaughter, and a magical invention that has the power to change their lives forever.

We don't get many fantasy adventures featuring a young woman of color so JINGLE JANGLE offers young black children a chance to see themselves in a genre that have ignored them in the past.

Set in 1989 an ambitious young woman gets a weave in order to succeed in the image-obsessed world of music television. However, her flourishing career may come at a great cost when she realizes that her new hair may have a mind of its own. Weaves becomes the hoThe horror movie

Bordering on ridiculous on a cult level status, BAD HAIR explores what Black women face when it comes to identity related to their hair style. The fashion of the day is something the filmmakers have fun with along with the subject matter.