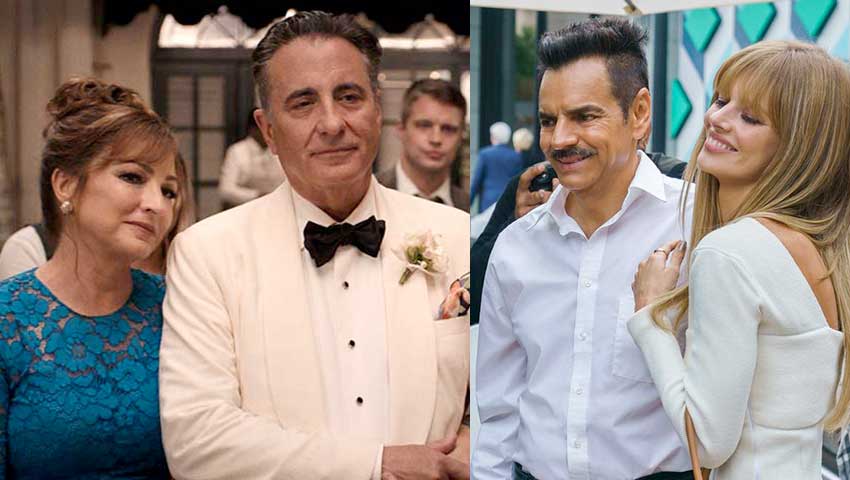 Veteran actors Andy Garcia and Eugenio Derbez headline new movies that put Latinos front and center in a positive light with no narcos in sight. Andy Garcia's reboot of FATHER OF THE BRIDE premiered on HBO MAX and Derbez's remake of the French film, THE VALET is now streaming on HULU.

Representation of Latinos on the big and small screens seems to be relegated to stereotypes such as narcos or criminals. Series like Better Call Saul and Netflix’s Narcos series boasts a large Latino cast but most often they are criminals. Luckily for the actors, they are part of a compelling and entertaining series, but as a viewer, you tire of seeing yourself portrayed in the same manner. Or you have the network procedural shows that feature an ensemble cast with people of color but the characters are assimilated so culture doesn’t play into their personalities.

In other instances, the representation of Latinos goes overboard in that characters are walking cliches with salsa or mariachi music playing as their theme.

It’s not easy balancing representation since Latinos are not a monolith. However, THE VALET and FATHER OF THE BRIDE do a great job of focusing on the story with characters that happen to be Latinos.

Mexican actor and comedian Eugenio Derbez came to Hollywood hoping to change the perception of Mexicans. An established celebrity in Mexico, Derbez started with small roles in Hollywood movies (GEOSTORM, THE NUTCRACKER AND THE FOUR REALMS, but he’s had more success with his own production company, 3Pas producing successful family-oriented flicks such as INSTRUCTIONS NOT INCLUDED, OVERBOARD, and Apple TV’s endearing series Acapulco.

Derbez’s latest movie for HULU is THE VALET, a bilingual adaptation of the French film. On the surface, it looks like just another romantic comedy but it has more in common with Jerry Lewis’ CINDERFELLA (1960). Derbez plays Antonio, a parking valet who’s enlisted to pose as a movie star’s (Samara Weaving) boyfriend in order to cover up her affair with a powerful, married man (Max Greenfield). You’d expect Derbez’s character and the starlet to fall in love, but the story doesn’t go down that predictable route.

In Derbez’s comedy, he portrays a divorced working man living with his loving mother played by the late and beloved Mexican actress Carmen Salinas. He’s surrounded by his large family, and his hilarious friends (Amaury Nolasco, Carlos Santos). In comparison to the starlet’s lonely celebrity life, Antonio’s support group is much more desirable than the princess in the story.

THE VALET captures the closeness of the Latino family, and it also includes an Asian family in their apartment dwelling.

The FATHER OF THE BRIDE reboot also focuses on a family, a Cuban-American one. The HBO Max movie shares a premise with the originals with Andy Garcia as the patriarch dealing with his daughter’s (Adria Arjona) upcoming nuptials to a Mexican man (Diego Boneta). However, the 2022 version is light on the comedy with Garcia playing an old-fashioned Cuban-American male with no sense of humor. He must learn to lighten up and enjoy the festivities.
While THE VALET focuses on a working-class family, The FATHER OF THE BRIDE features an affluent Latino family in Miami. The groom's family is an even richer family out of Mexico so when the two fathers meet, it’s game on to outdo one another.

'Father of the Bride' Full Movie Review: A Sabroso Reboot

FATHER OF THE BRIDE features Latinos behind the scenes as well with Matt Lopez as the screenwriter and Mexican director Gary Alazraki at the helm. Andy Garcia is an executive producer. The representation behind the camera is evident, especially in the competitive nature between the two fathers. Latinos from different countries and cultures can be very competitive with each other and that’s captured in the HBO Max movie in a comedic fashion.

Both THE VALET (HULU) and FATHER OF THE BRIDE (HBO Max) are feel-good movies that Latinos can be proud of.