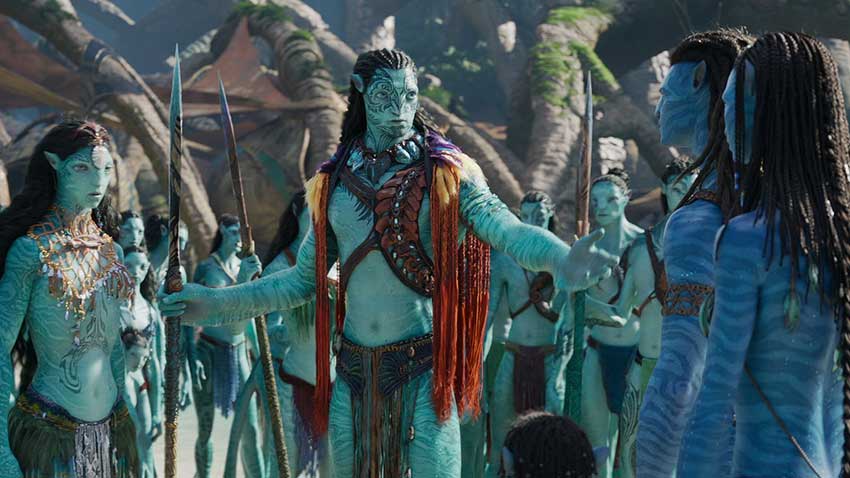 It’s no surprise James Cameron delivers a visually stunning film in AVATAR: THE WAY OF WATER. As indicated in the title, most of the action takes place in Pandora’s oceans with Jake and Neytiri’s offspring taking center stage in the second outing.

Ten years after the events of the 2009 film, Jake Sully (Sam Worthington) and Neytiri (Zoe Saldana) have settled into family life with their children and occasionally battle the human invaders. Their lives are disrupted when an old foe returns for revenge. The family flees the forest and settles with an oceanic clan called the Metkayia. They are like the Na’vi except for some slight body differences due to their habitat. Obvious Polynesian influences can be seen in the oceanic clan’s features.

James Cameron focuses on the next generation of Na’vi in THE WAY OF WATER. The parents take a backseat. Luckily the Na’vi kids hold your gaze as well as the visuals. However, a pet peeve is the youngling’s dialogue. They speak in typical teen language calling each other “bro” like their earthling counterparts. It’s possible they could’ve learned the hip quips from their father, a former earthling but the Metkayia teens also speak in the same manner so it doesn’t make sense.

In the 2008 film, Cameron explored the lush Na’vi jungles. In the sequel, Cameron, an environmentalist and ocean aficionado, infuses the movie with the beauty of the sea and messaging about human’s lack of respect for natural water resources. There are some very sad moments that reflect real life that will hopefully educate a young audience about the climate, and inspire future climate activists.

THE WAY OF WATER is much more sentimental than the original. Family is a huge theme in the sequel, and it’s carried through several relationships even from some unlikely sources.

AVATAR 2 drags a bit in the middle as the teens explore their new environment. This underwater world is a magical and immersive experience to watch, and at times it feels like an educational film but you can’t take your eyes off the screen.

Cameron resurrects Sigourney Weaver’s Dr. Grace Augustine and Stephen Lang’s villain Colonel Miles Quaritch in a different form. These actors’ new characters are actually the most interesting in the follow-up. However, there’s a build-up to one of the characters as a possible savior but the seeds are only planted with no payoff. What does this character’s powers mean? You’ll have to find out in the next two AVATAR movies.

Kate Winslet doesn’t make her usual impact. Winslet’s motion capture performance as Ronal, the head of the Metkayia clan is barely on screen, and unlike the other avatar - there’s no physical resemblance.

There are moments in AVATAR: THE WAY OF WATER that is typical Cameron. ALIENS and TITANIC will come to mind during a few scenes in the very long movie. The stunning visuals may make you forget the long running time.

The big action sequences are bookended with the middle portion dedicated to introducing this new underwater world and its beauty.

THE WAY OF WATER story is familiar with many similar themes recycled but the change of setting on Pandora, the focus on new characters, and the visuals make it worth the watch on the big screen, preferably in 3D for a more immersive experience.