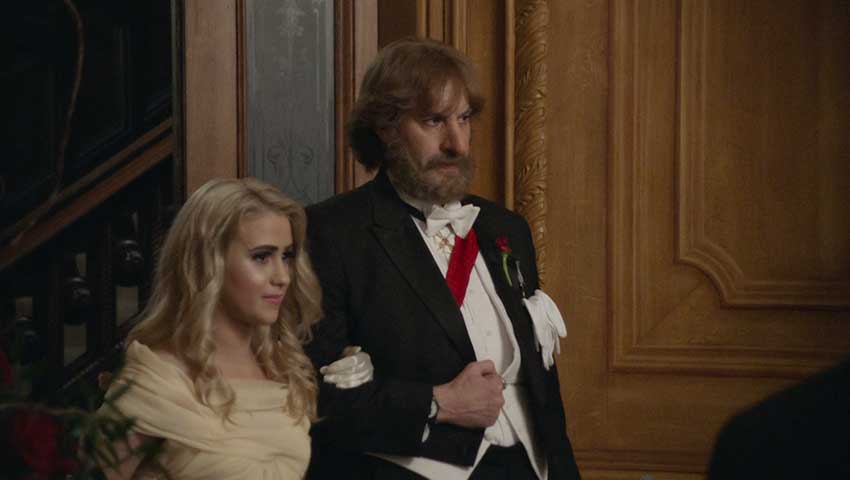 Sacha Baron Cohen returns as Borat for another glorious movie making fools of Americans in BORAT SUBSEQUENT MOVIEFILM: DELIVERY OF PRODIGIOUS BRIBE TO AMERICAN REGIME FOR MAKE BENEFIT ONCE GLORIOUS NATION OF KAZAKHSTAN. And what a time to do it. Fourteen years later, Cohen picks up his character with ease to shock and make audiences uncomfortable once again.

After Borat was first introduced to American audiences in BORAT: CULTURAL LEARNINGS OF AMERICA FOR MAKE BENEFIT GLORIOUS NATION OF KAZAKHSTAN, his country apparently didn’t see the movie as flattering so officials sent him to prison. That’s where we find him. Now that a regime has been installed in America, he is told he’d be forgiven if he delivers a gift to Vice President Michael Pence. After something goes awry with the intended gift, he decides to gift his 15-year-old daughter (Maria Bakalova).

Then hilarious ensues using the same formula as the original film. The humor comes from making fools of dim-witted and prejudiced Americans and their archaic beliefs. Again he targets rural America in a much different light because of Trump. Two rural guys Borat conned into staying with are actually nice men but their political views are out of whack with reality.

The first half of the film had me chuckling throughout but the last third of the movie wasn't as funny or shocking since most of the scenes were revealed in trailers. This portion of the movie mostly makes you cringe more than laugh specifically the Rudy Giuliani sequence. That guy is a creep but the actress playing Borat's daughter has to flirt with him. Gross!

Sacha Baron Cohen delivers a similar experience like the original. However, watching at home alone is not quite the same experience. I watched the first Borat in a movie theater and I almost coughed up a lung laughing so hard along with the audience. A few people walked out but the uncomfortable nature of being with strangers added to the awkward experience of the whole thing. The communal experience is missing here.

Borat's schtick works here again in a much different climate. BORAT 2 is definitely one to share with a Zoom room filled watch party with your friends. It's now on Amazon Prime.