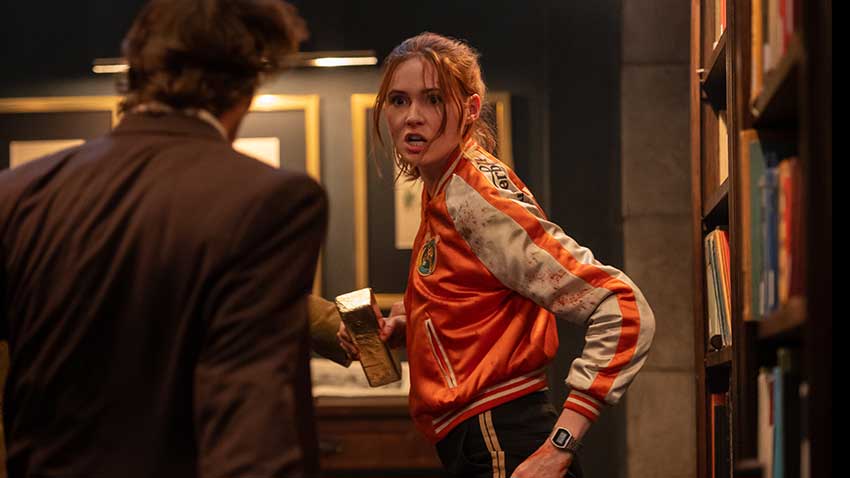 Karen Gillan, Lena Headey, Michelle Yeoh, Angela Bassett, and Carla Gugino star in the action-comedy, GUNPOWDER MILKSHAKE streaming on Netflix. Despite the false advertising, the Netflix movie is Karen Gillan's movie with the other actresses showing up when some butt-kicking is needed. The film is a fun cross between JOHN WICK and KILL BILL.

Sam is following in her mother's footsteps as an assassin. Scarlet (Headey) left Sam behind when she was 12-years-old to keep her safe. The elite assassin works for The Firm that raised her. Fifteen years later, Sam is their top hit-woman until she falls out of favor with the corporation, and send a bus load of Russians after her. Instead of carrying out a hit, she takes pity on the target and his daughter (Chloe Coleman) who she must save from kidnappers. In order to stay alive, she seeks out The Librarians, a group of hit-women (Gugino, Bassett, Yeoh) who operate out of a library that doubles as a weapons stash house. The three generations of women band together against the Russian henchmen.

The offbeat title alone should intrigue viewers. GUNPOWDER MILKSHAKE doesn't take itself seriously. The action sequences are bloody and gritty but there's humor in the stunts and deaths. The weaponry is vast with the characters finding ordinary objects to maim and kill.

Gillan is compelling as Sam, and a legit action star. She moves like a ballerina and an athlete during her stunts. She performs most of the complicated moves and puts her full body weight into the action.

The Librarians are not fleshed out with little background on the lady killers and their history with The Firm. However, they are fierce assassins with certain skills that make them lethal. Young actress Chloe Coleman is spunky and endearing to watch on the screen once again. She stared with Dave Bautista in MY SPY, and stole the show there as well.

Get your popcorn and enjoy this thrill ride on Netflix.