Netflix Review: 'Malcolm & Marie' May Be Too Inside Hollywood 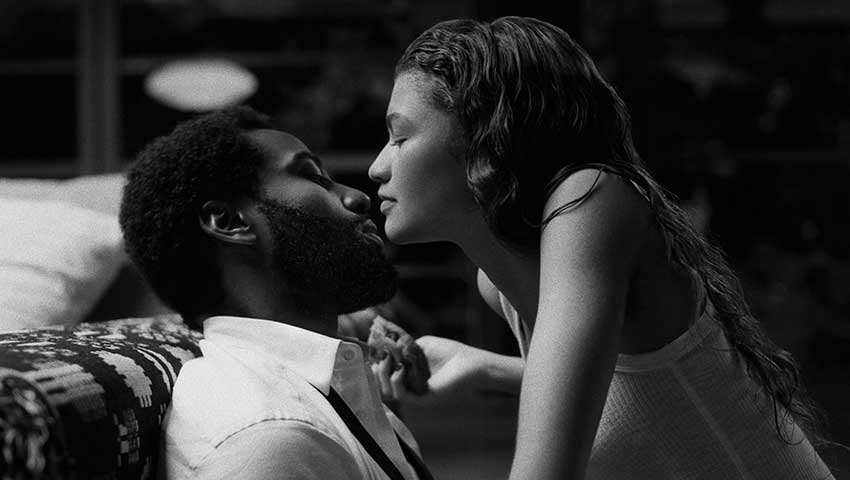 Zendaya and John David Washington star in the new Netflix movie, MALCOLM & MARIE premiering February 5. It's not exactly your go-to movie for Valentine's Day, and it may be too inside Hollywood for the general public, but it is an interesting experiment.

Written and directed by Sam Levinson (Euphoria), filmmaker Malcolm and his actress girlfriend Marie arrive home after Malcolm's successful movie premiere. He's about to become a big deal, but Marie doesn't share in his excitement. When Malcolm insists she tell him what's the matter, a war of words begins. Whatever is bottled up between them comes up in an all night fight session.

The black and white film takes place entirely in a lavish glass house that allows the viewer to feel like a voyeur into their relationship. The couples movement around the luxurious home keeps the movie flowing nicely so as not to bore you with the single setting.

There's no apparent intention for the desaturated look for MALCOLM & MARIE except merely as a visual style. It doesn't add much except question the choice. The synopsis does offer insight into the choice. "Levinson creates a film of rare originality; an ode to the great Hollywood romances as well as a heartfelt expression of faith in the medium's future." That's not to say the cinematography by Marcell Rev is not beautiful. The contrast is stunning but there's no real purpose for it.

Malcom and Marie's relationship seems more modern than a classic "Hollywood romance." The couple mostly argue over Malcolm's neglect in acknowledging her influence as his muse for his latest film. The neglect is something most people can relate to but their issues specifically are in relationship to each other as a filmmaker and his muse. A mainstream audience may feel disconnected with the subject matter.

Malcolm also vents about white critics misrepresenting his ideas as a filmmaker and simply defining him as a black auteur. There's a lot to unpack in that scene, and in writing this review - you can't help but take that valid rant into consideration. The director/writer is not a black filmmaker so it would be interesting to have insight into whose view that is. Washington is a producer on the film so perhaps he added his own take about the subject.

Thankfully Washington and Zendaya deliver great performances in a role that allows them to showcase a wide range of emotions. Without good actors, this simplistic plot may have been dull. Washington is impressive in delivering very long monologues in one long shot. Zendaya graduates from teen dramas and comedies to a very mature role. The Emmy-winning (for Euphoria) actress' body of work has been impressive since her Disney days and she is on a path to a successful Hollywood career.

MALCOLM & MARIE leaves you exhausted because of the constant combative nature of the characters. There are lulls in the intensity when the couple seem to reconciliate and have a good laugh, then another issue arises. The arguments are very realistic. The characters throw out insults that hit deep. It also captures the different ways in which women and men handle arguments. Women hold grudges longer while men would rather ignore any confrontation.

Directed by Euphoria creator Sam Levinson, the director/writer keeps up the intensity of the conflict. There are some very dark moments in MALCOLM & MARIE and the director makes the viewer feel uncomfortable ease dropping into this dysfunctional relationship. EYES WIDE SHUT with Nicole Kidman and Tom Cruise is another film most like this one. However, Levinson's film is much more dynamic in the way it is shot plus they don't tread on familiar arguments over infidelity.

MALCOLM & MARIE is an experimental film with a subject that may not appeal to the masses. If you're in the business, however, the insights from a filmmaker's perspective is an interesting study.