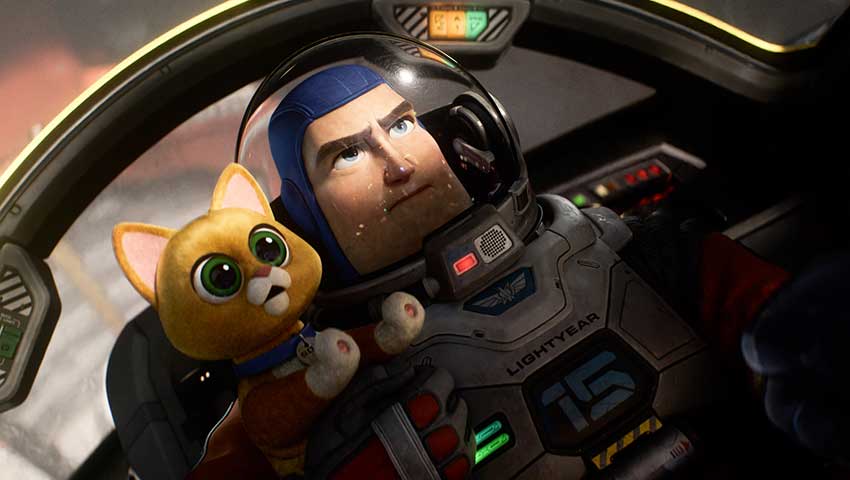 LIGHTYEAR, Pixar’s latest movie is a throwback to the classic space adventures a la Buck Rogers with some modern upgrades. Chris Evans delivers the perfect pitch as Buzz Lightyear and SOX the robot cat is the next hot merchandise.

The Space Ranger from the TOYS franchise gets an origins story with Chris Evans assuming the voicing duties of Buzz Lightyear. In LIGHTYEAR, Buzz is marooned on a hostile planet 4.2 million light-years from Earth with his crew and a robotic cat, SOX. He’s determined to find a way back home with the help of new recruits.

LIGHTYEAR is an old-fashioned sci-fi action-adventure movie in the vein of the 1979 television series, Buck Rogers in the 25th Century. The classic elements include a talking robot but in the shape of a cat, an unlikely team and a giant evil robot. However, the Pixar adventure modernizes the space odyssey with a better representation of people of color and the LGBTQ community in an organic fashion. Disney and Pixar have to be commended for those choices given the toxic political climate and fear-mongering from the conservative side.

Evans’ Buzz is everything you want in a Space Ranger. The classic traits from the TOY STORY character are there although this version is less cocky than the original who loved to pose. You instantaneously fall in love with this new character because of his friendship with his best friend, Commander Alisha Hawthorne. As usual, Pixar knows how to tug at the heartstrings, and hook you in right away.

The scene-stealer and future obsession of many will be SOX, the robotic cat voiced by Pixar animator and director of the upcoming ELEMENTAL, Peter Sohn. Sox is loyal and hilarious as Buzz’s sidekick. He acts like a cat and then surprises you with a new skill.

Taika Waititi brings his usual quirky self as the voice of Mo, and Dale Soules is hilarious as the elderly ex-convict Darby.

LIGHTYEAR is the perfect family adventure to share on the big screen when it hits theaters on June 17.