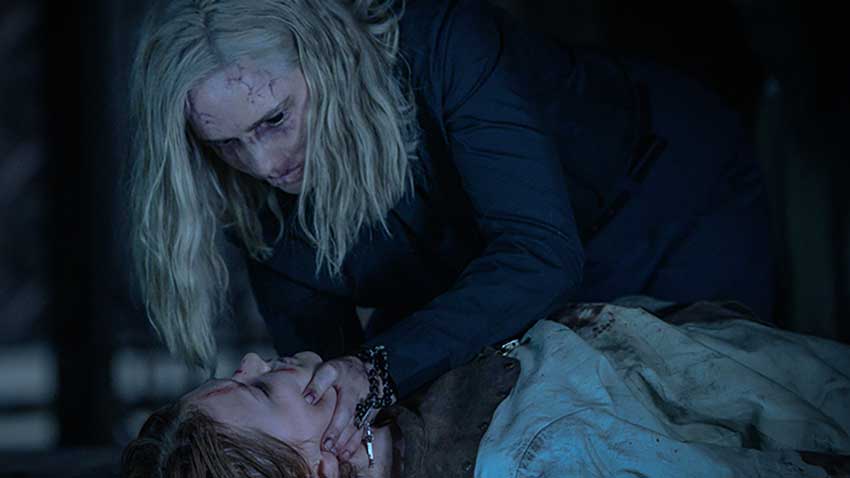 Don’t let the PG-13 rating fool you, PREY FOR THE DEVIL is one freaky good time that will have you holding on to your theater partner. With no shortage of exorcism movies, director Daniel Stamm brings a fresh take on exorcism movies for the first two-thirds of the movie until the final sequence treads familiar territory.

Sister Ann (Jacqueline Byers) believes she is answering a calling to be an exorcist but the Catholic Church doesn’t allow women in the exorcism school. One professor (Colin Salmon) recognizes Sister Ann’s gifts and allows her to join his lectures. The nun and a young priest Father Dante battle for the soul of a young girl possessed with the same demon that tormented her mother during her childhood.

PREY FOR THE DEVIL screenwriters Robert Zappia, Earl Richey Jones, Todd R. Jones, and director Daniel Stamm take the viewers behind the scenes with the exorcists’ perspectives within the Catholic Church. In past possession tales, the action takes place in the character’s home whereas PREY FOR THE DEVIL mostly occurs inside the religious institution dedicated solely to demonic possessions and mental illness.

In the opening prologue, the filmmakers provide a backdrop to what we are about to watch. Some frightening true facts are revealed in that possessions have increased and nearly doubled which prompted the Catholic Church to reopen exorcism schools for priests and a facility to monitor possessed individuals. In an interview with Daniel Stamm, the director stated those were actual facts the screenwriter learned from his research.

Right away, we’re endeared to Sister Ann as a survivor of an abusive mother who Ann suspects was possessed by a spirit. She recounts the horrors of her childhood to a psychologist played by Virginia Madsen. Madsen’s character assesses patients in the Catholic facility and identifies them as possessed or suffering from mental illness.

At the facility, Sister Ann is taken with a young patient named Natalie who’s tormented by a demon. Most of the demonic activity in the movie is focused on Natalie. Actress Posy Taylor delivers a phenomenal performance transitioning between the demon and Natalie. Sister Ann and Father Dante race against time to save Natalie. The most horrific scene is in the ambulance when Natalie’s demon takes everyone out. It’s not graphic but the way the director shot it with flashing cuts made it seem gruesome.

It’s actually quite heartbreaking to see the young girl go possessed. Hopefully, the actress faired better than Linda Blair who revealed she was traumatized by the experience. Actors Byers and Navarro assured us the young actress was able to shake it off when the cameras stopped rolling.

The film gains momentum as the stakes become higher, and Sister Ann is dealing with her own past demons, literally. The same demon who inhabited her mother is now after her, but her faith keeps them at bay.

PREY FOR THE DEVIL is freaky rather than scary especially during the contortion scenes when the actor’s bodies bend and crack when the demon takes over. Those scenes are bone-chilling.

Unfortunately, the climax is where it falls apart. The beats become predictable and familiar tropes take over. The showdown between good and evil ends with a whimper.

Regardless of the weak ending, PREY FOR THE DEVIL is an entertaining watch with interesting characters and intense scenes for the Halloween season.