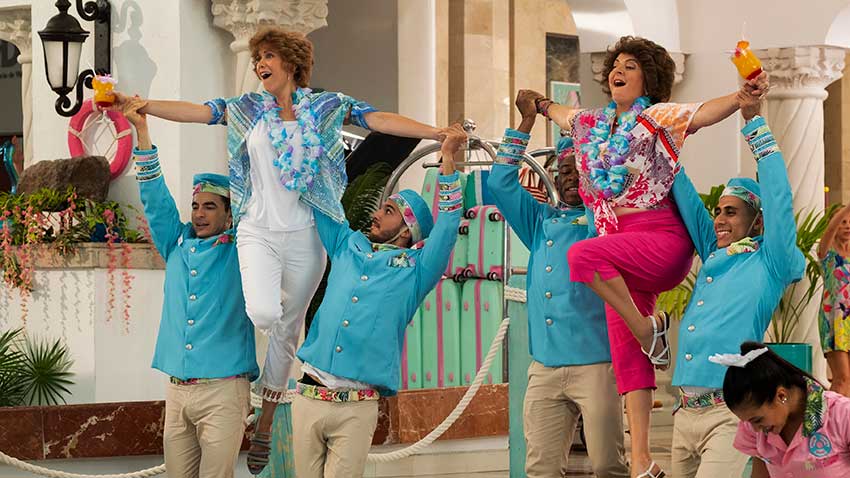 There's a reason why Kristen Wiig's latest film went straight to rental. BARB & STAR GO TO VISTA DEL MAR is like a live version of a DESPICABLE ME movie or feature length SNL skit. It borders on stupidity but Wiig and her costar/writing partner Annie Mumolo are endearing enough to keep your attention as long as your expectations remain low. It doesn't deliver on the belly laughs we've come to expect from Wiig's comedy but you will get some chuckles. Unfortunately Jamie Dornan feels out of place in this silly comedy.

Kristen Wiig and BRIDESMAIDS writing partner Annie Mumolo team up once again for another gal pal adventure. The middle-aged women from a small Midwestern town take their first ever vacation to a Florida beach resort for some fun, sun and absurd situational comedy.  Jamie Dornan joins the circus and Damon Wayans Jr. pops in once in a while for a wasted role.

BARB & STAR GO TO VISTA DEL MAR starts out low energy with a few giggles. It's not until the second act when it's a bit more bearable. However, Wiig and Mumola as Barb and Star are too cute to turn the movie off just yet. They have no mean bones in their bodies which is refreshing at a time when everyone is at each other's throats. Even when one of them feigns sickness to sneak around with Dornan's character for a fling, the two never become mean-spirited towards each other.

The comedy is a mix bag. On two occasions, the characters break out in a silly song. Dornan's musical number is awkward and cringy but luckily his good looks keep you watching. Other times, it's a spy thriller with cartoonish characters including Wiig's double duty as the villain Star, an albino. Star, however, is one of the funniest things out of the movie.  The ridiculous situation and characters are straight out of DESPICABLE ME plot.

Jamie Dornan is certainly likable as a lovesick spy but the actor seems out of his league with the comedic cast. Not that he doesn't have the comedic chops like he proved in his other recent film WILD MOUNTAIN THYME, but this situational comedy requires a deadpan sort of reaction. The poor thing just looks like a deer in headlights.

If you're a fan of Wiig, then you'll have a good time but don't expect to be rolling on your couch in laughter but you will be amused.

Take a trip and break out of your shell with Barb and Star. From the gals who brought you Bridesmaids(co-stars and co-writers Kristen Wiig and Annie Mumolo) comes BARB & STAR GO TO VISTA DEL MAR. Lifelong friends Barb and Star embark on the adventure of a lifetime when they decide to leave their small Midwestern town for the first time…ever. Romance, friendship and a villain’s evil plot…Hold onto your culottes, BARB & STAR debuts in your home on February 12th!