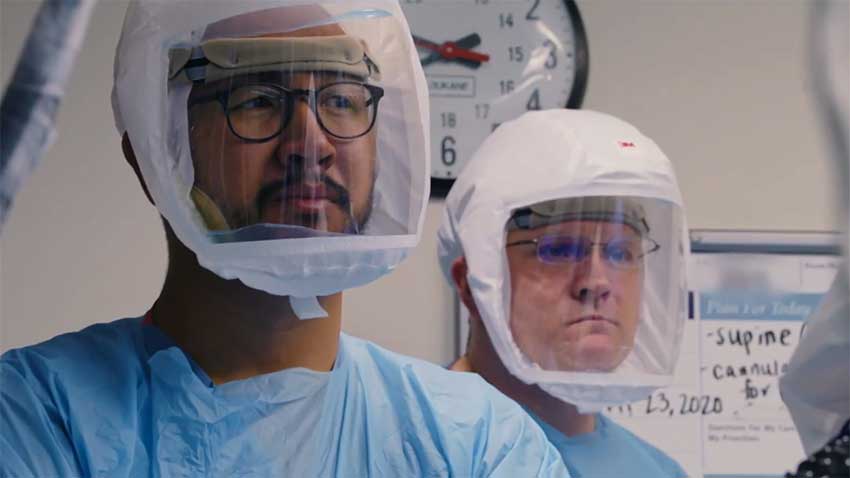 The failures of the United States federal government to contain COVID-19 is well-documented in the media but a new documentary, TOTALLY UNDER CONTROL tracks the rise of the deadly virus in broader terms. From Academy Award-winning director Alex Gibney with Suzanne Hillinger and Ophelia Harutyunyan, the documentary was filmed in secrecy for the past five months in order to get on record insider information revealing details behind the failed response. TOTALLY UNDER CONTROL compares South Korea's response in contrast to the United States which makes for a riveting watch.

The documentary title is in reference to Trump's early messaging about the airborne disease. As 45 was touting the virus as nothing more than a flu in early 2020, China, South Korea and other countries were taking it very seriously and implementing steps to minimize deaths.

It's not a political hit job against the current administration. The experts also fault previous administration for not acting quickly with H1N1 and Ebola, but not at the level of negligence seen in this documentary with COVID-19.

South Korea's handling of the virus versus the U.S.'s non-existent plan is astounding in TOTALLY UNDER CONTROL. The images are jarring. Korean health care workers are decked out in full hazmat suits in hospitals while American first responders are wearing trash bags and homemade masks. The contrast is glaring. A few hundred people in South Korea died from COVID-19 with no lockdown while the U.S. has passed 200,000 deaths with a partial lockdown.

TOTALLY UNDER CONTROL features medical professionals, scientists and insiders reflecting on the response including three whistleblowers. Rick Bright went public after he was ousted from the Health and Human Services (HHS) when he refused to submit to pressure from the administration to push hydroxychloroquine with no scientific proof. He details the pressure put on him to bypass standard procedures to authorize a medication for emergency use. Bright exhibits passion and principles lacking in other public officials, but he lost his job over it.

Another whistleblower is speaking out even though he signed a non-disclosure agreement when he volunteered for Jared Kuchner's task force. The young man along with other college-aged individuals were recruited to Kushner's team to cold call private companies to procure PPE without any direction or handbook. They were left up to their own devices. His team sat around scratching their heads waiting for a government official to provide procedures to pay for these items. They blindly gave out checks to these volunteers without the proper vetting.

This same whistleblower also explains how the states ended up buying PPE and respirators for double the price. It wasn't an accident, but pure greed. The White House blamed it on the companies driving up the prices, but the truth is his task force was the reason behind it at Kushner's direction.

There are many implications here about the motives behind Trump's administration hands off approach, but it's up to the viewer to interpret what they have just watched. TOTALLY UNDER CONTROL presents the facts without judgement but the evidence is clear - many American deaths could have been avoided.

NEON's TOTALLY UNDER CONTROL is now streaming on demand and on Hulu October 20th.

More about TOTALLY UNDER CONTROL
At this moment 190,000 Americans have died from COVID-19. From July 15 to August 31, the death toll was running at an average of 1000/day. That’s double the number of those who perished on 9/11 every week. The carelessly designed lockdowns and their long-lasting economic effects have led to massive job losses (23 million/14.7% in April), widespread hunger, dislocation and a runaway federal deficit. Had the federal government done its job properly by following clear guidelines in place based on past pandemics most of the death and destruction could have been avoided. While the current administration makes its claims for a job well done, the fact is that the US response to COVID-19 is one of the worst, with 4% of the world’s population and 21% of the deaths.

How did this happen?

On January 20th, 2020 the US and South Korea both discovered their first cases of COVID-19. However, 9 months later, the novel Coronavirus has claimed the lives of almost 200,000 Americans and caused staggering economic damage, while in South Korea, there were no significant lockdowns and, in an urbanized population of 51 million, only 344 lives have been lost. Where did we go wrong? As the presidential election nears, Americans are increasingly enraged by a lack of clear leadership, endemic political corruption and left to wonder how did the wealthiest and most powerful country in the world manage to fail so thoroughly in its response to a global pandemic?