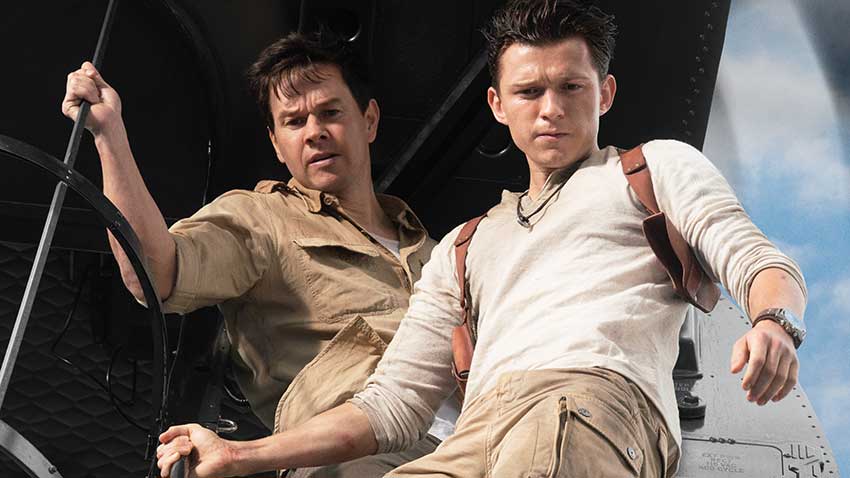 There’s nothing original about this treasure hunt movie but Tom Holland’s knack for action and the character's chemistry is enough to retain your gaze.

Directed by Ruben Fleischer, UNCHARTED is based on a video game by the same name. Holland plays treasure hunter Nathan Drake, Mark Wahlberg is “Sully” and Antonio Banderas plays one of the villains. Rising star Tati Gabrielle (The Chilling Adventures of Sabrina, You) also stars as well as Sophia Ali (The Wilds).

Sully recruits Nathan to help find the lost fortunes of Portuguese explorer Ferdinand Magellan from 500 years ago. Moncada (Banderas) joins the quest and thwarts their plans along with his hench-woman Braddock.

As a non-gamer, there were no expectations coming into this video game adaptation. It doesn’t matter if you’re familiar with the source material. UNCHARTED the movie is on par with National Treasure and The Da Vinci Code given the religious nature of some of the clues. The screenplay by Rafe Lee Judkins and Art Marcum & Matt Holloway adds zero in creativity as far as story. It’s a textbook treasure hunt movie.

Luckily the cast provides enough intrigue to go along for the wild ride and stunts. Holland and Wahlberg make a great team with their entertaining banter. The female stars (Tati Gabrielle, Sophia Ali) luckily are treated as equals and never once is their gender mentioned. Gabrielle is the perfect mean-mugging foe for the leads. She’s very capable in a fight and looks badass pulling it off.

The real sell is Tom Holland. We finally get to see what Holland is capable of outside the Spider-Man costume and the former dancer can really pull off the moves. As Drake, the actor is very likable, smooth with the ladies, and can wear the heck out of a tuxedo and adventure-setting clothes. He’s acrobatic with his moves and visibly performs his own stunts. He’s shirtless plenty of times so you can’t help but admire his sexy psyche. While Tom Holland still exudes that boyish charm, we can add sexy to his name, thanks to this role.

While the story is a paint-by-numbers formula, the action and stunt work was pretty impressive specifically the cargo plane sequence in which Drake is fighting henchmen while suspended in mid-air. The big action sequences were kept to a minimum in favor of more practical stunts.

However, the climactic action sequence in Act 3 was utter nonsense and takes you out of the movie. Two 500-year-old wooden ships are strapped to a helicopter while they chase each other. The scene bordered on ridiculous when you’re asked to believe that ships that old would withstand being flown and swung around in a chase scene.

UNCHARTED is exactly what the trailers are selling - a predictable adventure film.