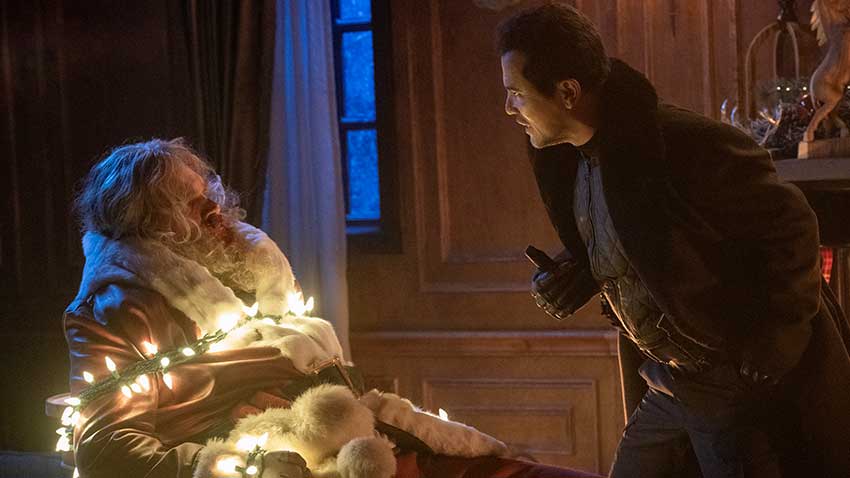 VIOLENT NIGHT is a bloody good time enjoyed most in a collective space. David Harbour is a killing machine as the very endearing and not-so-jolly Kris Kringle. It’s a must-watch for a silly and gory escape.

Santa Claus (David Harbour) comes to the rescue of a wealthy family being held captive by a group of mercenaries led by John Leguizamo’s “Scrooge” on Christmas Eve. The team’s devious plan is altered when the real Santa enters the fray.

Harbour’s St. Nick isn’t your typical Santa Clause. Like most working-class citizens, the old-timer is feeling the pressures of the job. Times have changed and the children no longer revere his “magic” as he calls it. He drinks his sorrows away and recalls his former day job centuries ago.

Only David Harbour could pull off playing a multi-layered character that’s been portrayed dozens of times. This Santa Clause is a complicated and disillusioned Kris Kringle. Harbour balances drama, comedy, and action with so much charm and depth. When he unleashes hell, it’s actually exhilarating however, the action is quite gruesome.

The action is brutal and gory so it’s not exactly a family movie but the feature is the perfect communal experience to share with strangers in a movie theater. The whole crowd participates in the shock and laughter which are plenty. VIOLENT NIGHT is a crowd-pleaser. The kills are creative which is no surprise given the producers are the filmmakers behind the JOHN WICK movies and ATOMIC BLONDE. with stuntman and director David Leitch choreographing the mano-a-mano fights and action sequences.

VIOLENT NIGHT borrows from other holiday classics such as DIE HARD and HOME ALONE, but it’s self-aware of it and mimics the action.

There are tons of great one-liners related to the holiday season, and some of them will become instant classics.

John Leguizamo delivers some of those great lines as the villain in the action movie, and he’s quite the Grinch as “Scrooge.” The actor brings a real menace to the character especially after manhandling national treasure Beverley D’Angelo. His character is a layered one with a backstory that explains how he got to that point. The actor has played his bit parts as a member of a team, but this time he heads up his own crew and he shows no mercy. He’s given a backstory

Beverly D’Angelo plays a role we haven’t seen her in. Even though she’s the main victim in this hostage situation, she’s been naughty all weekend along with her family. The only innocent character in the movie is the young character Trudy played by Leah Brady.

VIOLENT NIGHT is all fun and games with a thin plot that becomes overly hokey in the last 10 minutes. However, it doesn't take away from the enjoyment.

VIOLENT NIGHT is a roaring good time for adults, and an instant holiday classic.  The movie is