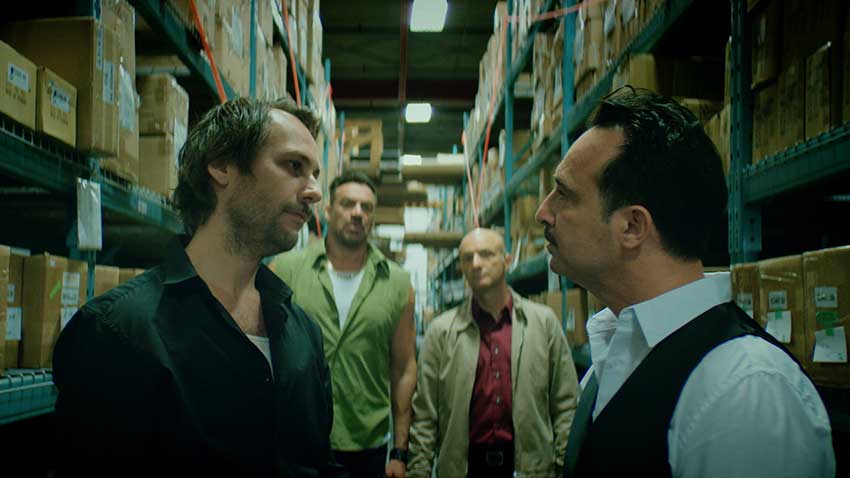 At the end of VOLITION, the main character boils down the events that have just unfolded to a single piece of dialogue. “Maybe it is that simple.” Actually the movie from first time feature film director Tony Dean Smith is anything but simple.

Described as a "time-bending cerebral science fiction thriller," Giant Pictures' feature film doesn't live up to the promise. Instead it's a jumbled mess of recycled ideas.

Starring largely an unknown cast, James (Adrian Glynn McMorran) is a clairvoyant who foresees his death. He tries to change his fate by going back to the events that propels that undesired outcome through time travel.

VOLITION starts out promising. James' special ability brings intrigue to his character. Ray (John Cassini), who dabbles in criminal activity asks James for help using his clairvoyance to guide him in selling millions of stolen diamonds. Ray allows James to take the diamonds for inspiration for his visions. That's where the trouble begins for James and a new woman he just saved from thieves.

SPOILER ALERT
As his visions play out, something changes resulting in someone else's death. James' adoptive father, Elliot and scientist reveals a twist in the story. James is not really clairvoyant. Instead his visions are instances of déjà vu. Elliot figured out a way to time travel using a serum. The injections allow James to travel through time to change the undesirable event. At one point, there are three versions of James in a sequence, but the BACK TO THE FUTURE rule applies here as well - the "James" have to avoid each other.

Like all "time-bending" movies perfected by Christopher Nolan, they all require multiple viewings. VOLITION is no different but a second viewing didn't clear up the inner workings behind this time travel. The science doesn't add up.

VOLITION suffers from plausibility issues. First off, why would a thief let anyone else hold on to diamonds worth millions, even a friend. Second, Angela, the woman he just met, doesn't debate why she's being dragged into a dangerous situation. Instead she goes along for a perilous ride with someone she barely knows. Any other woman would be gone in 60 seconds. Lastly, a simple phone call to Ray would've cleared up this whole mess.

VOLITION is a poor man's version of a Christopher Nolan movie. The film was awarded the best feature award at the Philip K. Dick Film Festival so maybe it has some merit, but too many things didn't add up including an unsatisfying ending.

VOLITION is out July 10 on Apple TV, Prime Video and other Digital Platforms.