5 Reasons Why SPARE PARTS is a Must-See Film 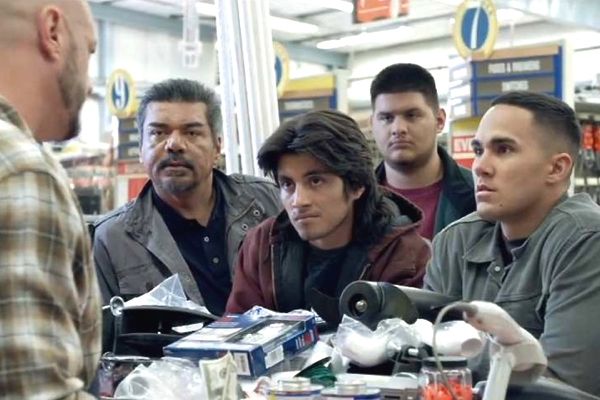 Underdog movies like Rocky, Karate Kid and many other sports-themed movies are fan favorites. We can now add SPARE PARTS to that list of inspirational stories that everyone should see.

Starring George Lopez, Marisa Tomei and Jamie Lee Curtis, SPARE PARTS is based on the true story of a robotics club formed by four underprivileged Hispanic teens who beat MIT in a robotics competition with a little help from their teacher (Lopez). If that’s not enough reason to see the film, here are 5 other reasons why SPARE PARTS should be on your must-see list when it opens January 16.

1. Not Your Typical Savior

Unlike most underdog movies, the teacher or adult isn’t coming in to save these kids or to steer them in the right direction. George Lopez’s Fred Cameron is an unemployed engineer looking to earn an income by becoming a substitute teacher at a high school in Arizona. Fred Cameron isn’t looking to change these kids lives. He’s merely surviving in the tough economic times. One of the students at the high school, Oscar Vasquez is an ambitious kid with dreams of joining the military, but there’s just one problem - he’s undocumented. He wants to obtain the American dream, but he’s held back by the fact that he has no legal rights in this country. Oscar learns of the robotics competition and pushes Cameron to supervise the group through school. Oscar sees this as his chance for a better future.  Cameron needs a little convincing but he agrees reluctantly and keeps his emotions at bay. While Cameron helps recruit others to join the group, the four boys are the driving force in the movie with aspirations of obtaining the American dream. By the end, Cameron learns some valuable lessons from the experience and the boys.

SPARTS PARTS is based on the true story of these four boys who beat out MIT at the robotics competition. A Wired Magazine writer picked up the story and wrote about the unbelievable triumph of these four adolescents, which inspired the movie.  The character of Oscar Vasquez is the actual name of one of the students, who faced a lot of obstacles in real life. Although he has been marginalized by the society he lives in and lived with the threat of deportation, he wanted to serve his adopted country but was denied entry into the military because of his status. While the film may fictionalize some details for the story’s sake, there is not much sugar-coating in this underdog movie. In two of the boy’s cases, the parents are the ones holding back their sons, making them feel like there is no future for them because of their undocumented status. It can’t get any more real than that.

Immigration has been a hot topic in Washington and the media. Opposition to Obama’s executive action with the Dream Act has made headlines.  SPARE PARTS presents a personal story of why we need a Dream Act. There are millions of children like the two of the boys in SPARE PARTS, who are bright, intelligent individuals being held back by their immigration status out of no fault of their own. This is one film all Washington politicians should see, and as Jamie Lee Curtis told us in our interview with her, it should be required viewing in schools as well.

With the lack of diversity on screen as proven in the recent Academy Award nominations, this movie comes at a time when the youth need to see themselves portrayed on screen in a positive and realistic light. Anyone from any background or race will relate to this underdog story, but rarely do we see Latinos portrayed in such an inspiring fashion.  Teens in similar situations may relate to the story more so, and provide some positive role models.

We’ve never seen George Lopez like this. As a comedian, he always delivers on the laughs, but his role in SPARE PARTS shows a much more serious side to his acting abilities.  While he provides some lighter moments in the film with comedy, his character shows a range of emotions and a vulnerability we’ve never seen before from the funny man.

Jamie Lee Curtis Talks Spare Parts, Immigration Policy and Why She Wanted To Be A Police Officer