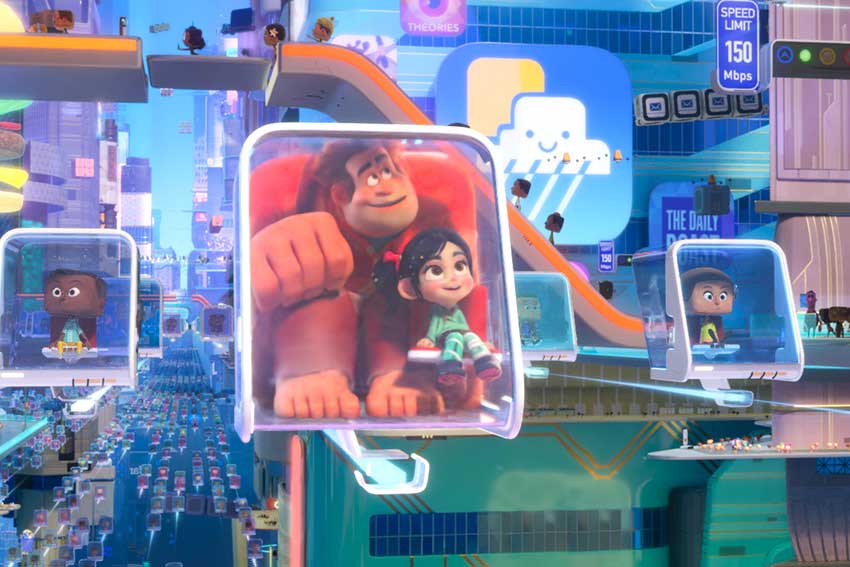 RALPH BREAKS THE INTERNET is less nostalgic than WRECK-IT RALPH but equally as fun. The follow-up to WRECK-IT RALPH will most likely delight younger audiences more so than the original since the jokes and setting are a place they are familiar with.

RALPH BREAKS THE INTERNET leaves the arcade arena and enters the world wide web. Of course anyone over the age of a toddler is well-versed in the many facets of cyber space wheras WRECK-IT RALPH was pure nostalgic joy for us big kids who grew up on arcade games. Many of the jokes and references of the first film probably went over the children's head since only adults were more privy to the inside jokes and parodies.

That's not to say anyone younger than a teenager didn't enjoy the visually-stunning and hilarious nature of the film six years ago. However, RALPH BREAKS THE INTERNET takes place in a setting we're all too familiar with so everyone is on the same playing field unless you live under a rock and have no use for a computer or smart phone.

RALPH BREAKS THE INTERNET pokes fun at internet trends, trolls and even introduces some click bait after the credits so stay for those. The Disney sequel even pokes fun at Disney itself with a hilarious sequence involving all the Disney princesses voiced by the original actresses. That was definitely the highlight of the film and the funniest.

Like the first one, it is a visual and color spectacular, and it's funny as hell with Sarah Silverman's Vanellope von Schweetz stealing the show. It's not all fun and games in the WRECK-IT RALPH sequel with light-hearted moments between Ralph and Vanellope and their evolving friendship. The film also takes time to address the negative aspects of cyber space when Ralph is hurt by the internet troll's negative comments on his viral videos.

It's hard to capture the magic of an original in a sequel, but RALPH BREAKS THE INTERNET is equally as magical and entertaining as the first one.