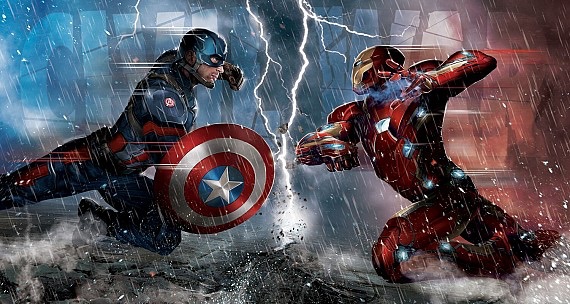 The Avengers are feuding in CAPTAIN AMERICA: CIVIL WAR and this past week Team Captain America and Team Iron Man were revealed in new concept art for the Marvel movie. Take a look at who is siding with whom.

Jeremy Renner released the concept art on his Twitter account with three new pieces of art including a close-up of his new and efficient-looking Hawkeye costume.

On Team Captain America is Cap himself as the boss with Anthony Mackie's Falcon, Hawkeye with Ant-Man on his shoulder Sebastian Stan's reformed Winter Soldier, Bucky and Agent Sharon Carter played by Emily VanCamp.

Missing from both groups are Scarlet Witch (Elizabeth Olsen) and newest Avenger Spider-Man who will be played by Tom Holland. It still remains to be seen which side they will take or perhaps start their own team.

At D23 Expo, we got to see first footage of some of the rivalry. Black Widow and Hawkeye go at it with Natasha asking Hawkeye if they will still be friends after their tussle. "Depends how hard you hit me," responds Renner's character. Also in that footage, a star struck Paul Rudd first meets Captain America and his team. Other than that, the footage featured a first look at Crossbones fighting Chris Evans.