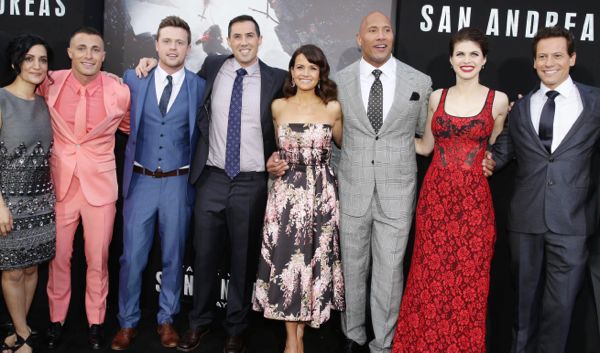 No doubt Dwayne Johnson has style, and he proved it once again making a grand entrance at the Los Angeles red carpet premiere of SAN ANDREAS. The Rock hung onto the side of a Los Angeles Fire Department truck as he arrived to the TLC Chinese Theater in Hollywood.  His SAN ANDREAS co-stars Carla Gugino, Alexandra Daddario, Ioan Gruffudd and the filmmakers joined him on the red carpet. Take a look at the photos from the event including Johnson's grand entrance.

In SAN ANDREAS, Dwayne Johnson plays Ray, a first responder and rescue-chopper pilot, who along with his estranged wife, sets out to rescue his daughter after an earthquake hits all of California. SAN ANDREAS opens May 29.