Chris Evans stars and executive produces the new tv mini-series for Apple TV + starring alongside his KNIVES OUT costar Jaeden Martell (IT Movie), Michelle Dockery ("Downton Abbey”), JK Simmons, Cherry Jones and Pablo Schreiber. "Defending Jacob" is based on the novel written by William Landay. Watch the video review above.

Evans plays Andy Barber, alongside his KNIVES OUT costar Jaeden Martell (IT Movie) who plays his son Jacob. This is the second time the two are starring together shortly after KNIVES OUT in which Martell plays his cousin, a creepy right wing teen.

Michelle Dockery ("Downton Abbey") plays his American mom so gone is her British accent. JK Simmons is Evans on screen father while Pablo Schreiber is sort of Evan's arch enemy.

The Apple TV+ 8 episode series revolves around Andy's son Jacob who is accused of murdering his fellow classmate. The synopsis for the show is classified as a legal thriller but I consider it more of a whodunnit it. Andy played by Evans is a district attorney for a small town who's initially investigating the death of a teenage boy but when his son's finger print is found on the dead boy's clothes, Jacob becomes a suspect and Andy's removed from the case and sent packing. He knows how prosecution works so of course he starts running his own investigation and often doing things that will probably make it worse for Jacob like hiding evidence that could've helped prove his innocence or the opposite.

Dockery's Laurie character isn't so sure of her kid's innocence given what she knows about the 14-year-old. The audience may also be questioning Jacob's guilt as the show goes on when he's posting a picture of himself holding an ax on social media. Not the brightest kid and sometimes he deserves a smack upside the head.

The prosecutor who replaced him on the case is played by Pablo Schreiber who's a real dick. He's hell bent on getting a conviction given there's evidence of another suspect. There's bad blood between Andy and Neal Loguidice but it's never really explained except you can assume its ambition. Sometime the tension is a bit too melodramatic, and LoJudas unsavory behavior just doesn't seem plausible at times.

"Defending Jacob" isn't perfect with half the stuff not seeming plausible but what will keep you watching is Chris Evans and the reveal of the true murderer.

Evans is captivating to watch even when his actions may not be the right ones. He's really grown as an actor since Captain America in comparison to his early work in which he played jock-types so well, and funny enough his KNIVES OUT character was a throwback to his past douche roles. He chooses very mature roles now giving him range so I expect him to stay around for a long time. And it helps that he's eye candy. Am I right ladies?

Dockery's performance is also engrossing as she becomes unhinged at the prospect that her son may actually be guilty. The opposing actions of Jacob's parents makes the story intriguing.

For Jaeden, however, his performance is very one-dimensional except for the finale where we finally see an emotion break through in a pivotal scene. Throughout the mini series, either the character or the actor doesn't really seem to grasp the reality that he may be going to jail for murder when his actions point to his guilt. Maybe he's being the typical teen who just shrugs things off with a "whatever" but the performance seemed very flatlined. Plus he's a bit creepy as the quiet type who constantly has to apologize for his stupidity. Or it could be those leftover feelings from last role in KNIVES OUT where he played the quiet, right wing teen sitting in the corner.

By episode 8, you may start feeling frustrated as the show goes off the deep end with another event that doesn't seem plausible and reverses the outcome, and then comes a cliffhanger. So if the show is successful, expect a second season.

I will say that frustration is what will keep viewers tuning back in every week unless you've read the book. There's many unanswered questions for example in every episode, Andy retells the story to a grand jury with Loguidice leading the questioning. It serves as Andy narrating the story, but you can't help but wonder "why is he there? What happened that's separate from the trial?" "Is this necessary to tell this story?" It's not until the final episode when you find out the reason he's sitting there recounting the events. It's sort of a twist but one that came out of nowhere.

Regardless if you're a fan of these actors, it's worth the watch especially if you like bearded Cap.

The first three episodes of “Defending Jacob“ premiere on Friday, April 24 on Apple TV+ and new episodes will premiere weekly thereafter every Friday.

For tips to watching this show without a subscription, watch video above. 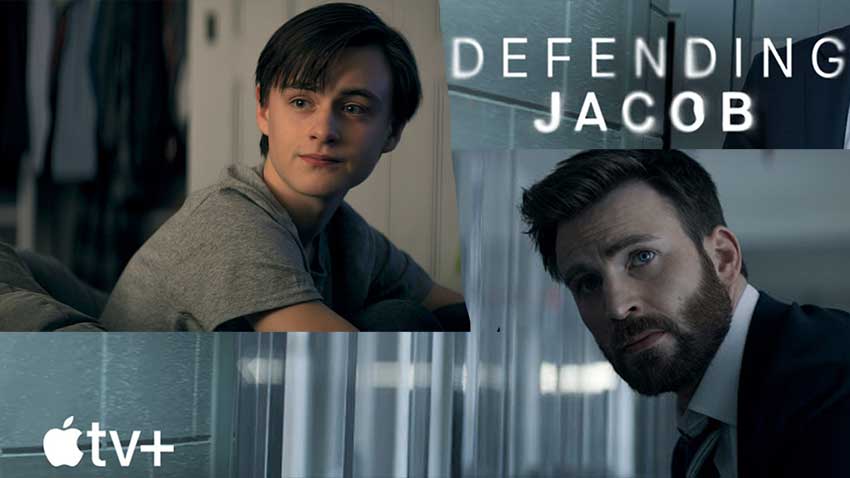