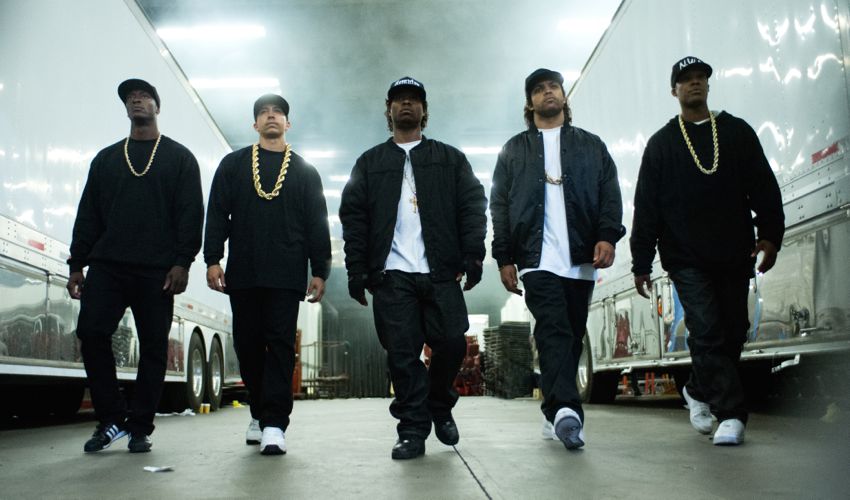 The public perception, thanks to the media, labeled Ice Cube, Dr. Dre, DJ Yella, Easy-E and McRen as thugs and gangsters who glorified violence, but STRAIGHT OUTTA COMPTON presents a totally different picture of the rap group. It humanizes the young artists, and shows how music was a way out of the hood for these ambitious teens. NWA’s music was also a way to vocalize their frustration with the injustices from police and the prejudice they faced as young black men. NWA’s infamous song, “F*** The Police” was put into context during the movie in a powerful scene that evokes anger even from the audience point of view. While recording their album in Torrance, CA, the members of NWA are harassed by local police outside the recording studio simply because black men like them didn’t belong in the largely white neighborhood. That powerful scene led to Ice Cube writing the lyrics to “F*** The Police,” and who can blame him.

The actors portraying Ice Cube, Dr. Dre, DJ Yella, Easy-E, and McRen did a fantastic job capturing the young artists, and the brotherhood they formed. Ice Cube’s son O’Shea Jackson Jr., Corey Hawkins (Dr. Dre), Jason Mitchell (Easy-E) are the heart of the movie, and the first time actors pulled it off seamlessly especially in two of the most emotional scenes in the movie, that had this viewer shedding a tear or two.

STRAIGHT OUTTA COMPTON works because the film is layered with different universal themes from friendships, rags to riches story to a David vs Goliath theme thanks to director F. Gary Gray. Gray has become the expert at creating great ensemble pieces with films like Set It Off (Queen Latifah, Jada Pinkett Smith), Be Cool (John Travolta, Dwayne Johnson) and The Italian Job (Mark Wahlberg, Jason Statham, Charlize Theron) under his belt. Ice Cube gave Gray his first shot at feature film directing when he encouraged him to direct Friday (1995), a film Ice Cube wrote himself. Without Gray, STRAIGHT OUTTA COMPTON may have been a different type of movie.