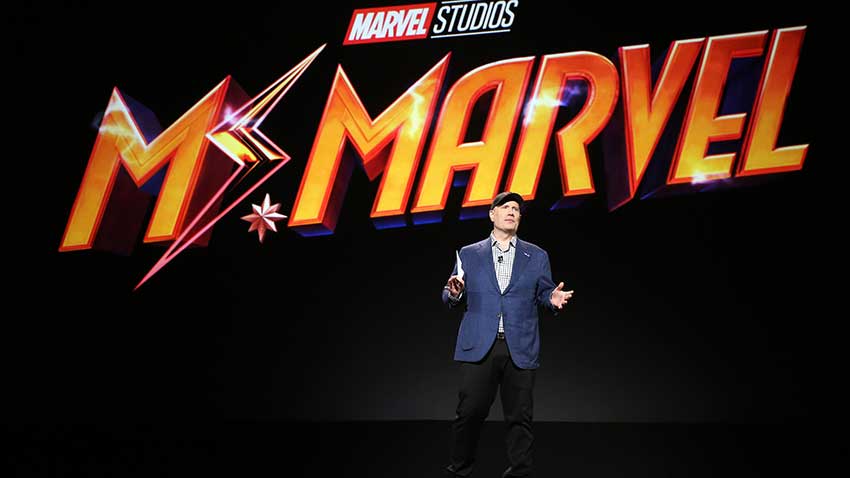 Marvel's Kevin Feige dropped some huge news and some footage at Disney's D23 Expo in Anaheim Friday afternoon regarding their slate for Disney+. The Marvel honcho announced Marvel Studios is developing three new live-action series: “Ms. Marvel,” “Moon Knight” and “She-Hulk,” from the Marvel comics. A few Avengers along with some new friends stopped by to say hello and represent for their spin-off series. Watch our recap of Friday's Marvel news below.

Feige kicked off his presentation with footage from their new Disney+ animated series, "What If..." Actress Hayley Atwell was brought out on stage after announcing will continue her journey as the voice of an animated Peggy Carter. He also announced most Avengers will return to voice their original characters in the animated series. Before bringing out Atwell, footage from the new show premiered.

Familiar scenes from the MCU movies have been animated but when some characters take off their mask, it's a totally different MCU character. In another scene, someone who looks like Agent Peggy Carter steps into the pod which transformed Steve Rogers into Captain America, and so she becomes Captain Britain with a shield with the English flag. Where is Steve Rogers? His scrawny self pops out of an Iron Giant-looking machine, and they go off to fight. Did Howard Stark create his own version of Iron Man in the 40's? Those questions will be answered when the show premieres in 2021.

The MCU spin-offs will not premiere at the launch of Disney+. ”The Falcon and The Winter Soldier" will premiere in 2020 starring Anthony Mackie and Sebastian Stan who graced the stage along with director Kari Skogland and head writer Malcom Spellman. Feige revealed Emily VanCamp is returning as Sharon Carter for the series, and they added Wyatt Russell ("Lodge 49) as a new character named John Walker from the comics. In the spin-off, Falcon now Captain America and Bucky Barnes aka the Winter Soldier team up after the events of AVENGERS: ENDGAME. No footage of the show was shown.

Audiences, however, did get a sneak peek at "WandaVision." The footage was of Wanda and Vision from the movies spliced with clips from the Dick Van Dyke show. The mashup didn't make much sense other than comparing the superheroes love story with that of Dick Van Dyke and his wife interacting. Director Matt Shakman and head writer Jac Schaeffer joined everyone on stage to reveal that the streaming series will blend the style of classic sitcoms with Marvel Cinematic Universe. The show's stars Paul Bettany and Elizabeth Olsen were on stage, and Feige introduced two more MCU characters are returning to this universe. Kat Dennings and Randall Park who will reprise their roles from “Thor” and “Ant-Man and The Wasp,” and a new character played by Kathryn Hahn (BAD MOMS) will be introduced as the nosy neighbor. “WandaVision” premieres on Disney+ in 2021.

Tom Hiddleston was not present for his new show, "Loki" but he did send a pre-taped message. Feige says we'll finally found out what happened to Loki after nabbing the tesseract in ENDGAME. “Loki” debuts on Disney+ in 2021.