Behind the Making of Electro in THE AMAZING SPIDER-MAN 2 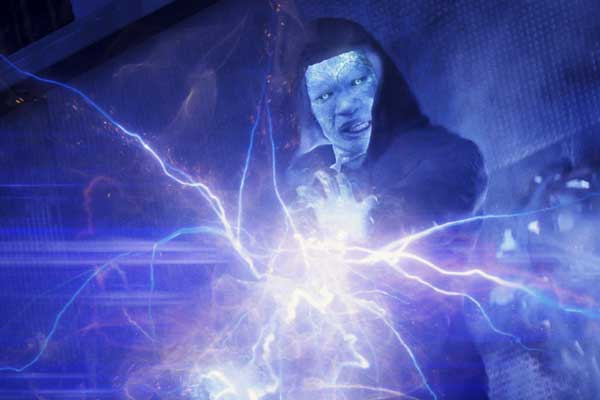 When it came to combining the live action shots with the visual effects in THE AMAZING SPIDER-MAN 2, Senior compositor at Sony Pictures Imageworks Pablo Holcer tells CineMovie that achieving Electro’s final look on his skin was the most challenging and interesting.

Didn't get enough toys from Santa to keep you busy Christmas Day or pissed off that everything is closed on old Saint Nick's Day. No worries because you can unwrap a handful of new films hitting movie theaters on the 25th. We've got your movie guide to all the new and current films at the movies. Add a comment

Before he lost his life in the tragic car accident, Paul Walker was growing as an actor, and it was evident with his performance in HOURS, a film opening this week in which he stars and produced. Watch a clip from one of his last performances on the big screen. Add a comment

Reeling from a traumatic tour of duty in Afghanistan, Joey (JASON STATHAM), an ex-Special Forces soldier, returns to London to face another kind of war: life on the streets as a damaged, homeless veteran.  In an attempt to rehabilitate himself, Joey assumes another man’s identity and seeks the aid of Sister Cristina (AGATA BUZEKA), a young nun who works at an inner-city parish. But Joey’s expert training as a soldier marks him as a valuable asset, and he soon finds himself caught in the dark web of London’s criminal underworld.

Struggling to keep hold of his integrity, Joey offers his profits to those who need it most.  But when he learns his missing girlfriend was brutally murdered by a ruthless kingpin, he risks everything for bloody revenge, hurtling down a deadly path that promises to destroy him completely...or be his last and only hope at redemption.

IRON MAN 3 has yet to open stateside, but internationally the Marvel franchise has already opened in 42 territories with a $195.3 million take for the first weekend.

You don't have to wait another two years for another adventure with the Madagascar gang. Alex, Marty, Gloria, and Melman were last seen last summer in MADAGASCAR 3: EUROPE'S MOST WANTED, and now the wild bunch are back for a mini-movie on DVD.

Coming to DVD January 29th, Madly Madascar, the television series from Dreamworks Animation, focuses on Valentine's Day in the animal kingdom.  All your favorite Madagascar pals return in an all-new adventure! Alex’s favorite holiday, Valentine’s Day, brings hilarious surprises and excitement for the entire gang. Melman plans a big surprise for Gloria, Marty tries to impress a new friend and everyone wants to get their hands on King Julien’s love potion.

Russell Crowe takes on the comb-over and double-crossing nature of a politician for his new film, BROKEN CITY by Hughes Brother, Allen Hughes.  In this clip from the crime drama, Crowe as the mayor of a corrupt city, Hostetler informs Mark Wahlberg's character he owns him.

Fans have been taking to the web to post their AMAZING SPIDER-MAN movie reviews for the reboot of the web-spinning super hero.  And judging by the $35 million opening on first day, the good buzz is spreading.  Watch what fans are saying on their Youtube Channels in these video movie reviews.

THE AMAZING SPIDER-MAN, starring Andrew Garfield as Peter Parker/Spider-Man and Emma Stone, scored $7.5 million from midnight screenings Monday night  and heads into the weekend of July 9th with a box office tally of $75 million.  The Marc Webb-directed action will definitely hit the $100 million mark by Monday.  Oliver Stone's Savages and Katy Perry's Part of Me join Marvel's new franchise at the busy box office this weekend.

Given the overall positive reviews from fans and critics, THE AMAZING SPIDER-MAN is poised to break some more summer records.  According to Rotten Tomatoes, critics averaged a 72% approval while the fans enjoyed it much more with a positive 84% on the tomatometer.

Let's see what the fans had to say.


Jennifer Lopez comes along as a saber tooth tigress for a new 3D adventure with Ice Age's Ray Romano, John Leguizamo, Denis Leary and Queen Latifah in the fourth installment of the popular animated franchise. In this clip from ICE AGE 4: CONTINENTAL DRIFT, Lopez's character is saved from the frosty waters of the arctic by the Manny, Diego, and Sid. Add a comment

THE AMAZING SPIDER-MAN doesn't reinvent the wheel, but it does bring the friendly neighborhood superhero up-to-date with exceptional performances from Andrew Garfield and Emma Stone.

Fans may be seeing a lot less of Adam Rodriguez on television due to "CSI: Miami's" cancelation, but they can see all of him in his role as a stripper in MAGIC MIKE.