Disney•Pixar, Dolby, and the Los Angeles Film Festival have partnered for the grand opening of the Dolby Theatre in Hollywood with the world premiere of the animated adventure tale BRAVE. Add a comment

MARVEL'S THE AVENGERS blasted BATTLESHIP out of the water this weekend by dominating the box office for a third time. AVENGERS took in more than $55 million, more than any of the new releases combined.  Are fans returning to watch the Marvel movie more than once?  How many times have you seen the movie? Add a comment

VIDEO: What To Expect When Your Expecting Joe Manganiello? A Shirtless Scene

"True Blood's" Joe Manganiello is no stranger to shirtless scenes and his fans will be happy to know there's more of his naked torso in this movie clip from the new film release WHAT TO EXPECT WHEN YOU'RE EXPECTING.

Rihanna Makes A Splash With Acting Debut In BATTLESHIP

Most pop singers turned actors choose fluff roles for their big screen debut, but not Rihanna. The pop sensation's first acting gig as a bad ass in BATTLESHIP will surprise fans. 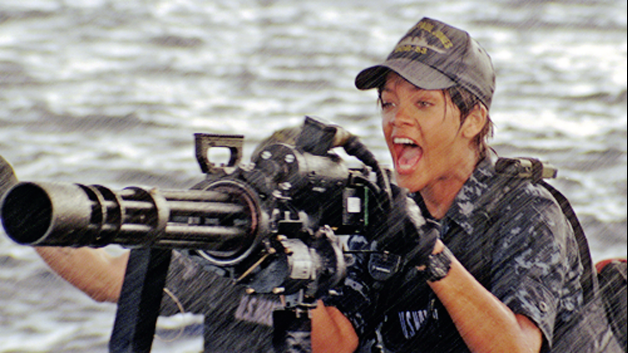 Good thing Rihanna didn't chose a romantic comedy to make her film debut.  Instead the Grammy Award-winning singer opted to join the navy as a petty office in BATTLESHIP taking on aliens with an arsenal of weapons at her disposal.  In this clip from BATTLESHIP, Rihanna shows the alien invaders who's boss.

Writer, actress, and producer Brit Marley isn’t waiting for Hollywood to come calling.  The star of SOUND OF MY VOICE sits down for a Q&A to talk about her new movie,  why she’s writing her own starring vehicles and why the cult/time travel movie appealed to her. Add a comment

Will Smith and Tommy Lee Jones are back May 20th with new alien creatures in MEN IN BLACK 3.  Go behind the production, casting, the alien make-up effects created by Rick Baker, and the visual effects by Sony Pictures Imageworks Inc. in the movie production notes for the Barry Sonnenfeld film.

The Weinstein Company gave the ultimate kiss of to the MPAA when it decided to open the controversial film BULLY as unrated versus taking the R-rated.  The film opens in Los Angeles and New York in select theaters Friday.  Everyone from Suze Orman to Yoko Ono have been tweeting all day of the importance of this documentary about the million of kids bullied in America. Add a comment

Josh Hutcherson has two hits under his belt so far in 2012.  The Hunger Games is a bonafide blockbuster while Journey 2: Mysterious Island also surpassed $100 million earlier this year.  For the actor's next release, Hutcherson returns to the indie world with DETENTION, a slasher teen comedy that marks the 20-year olds turn as a producer.

The movie-going audience satisfied their appetite by flocking out to see THE HUNGER GAMES and judging by the mostly positive reviews from fans, it's no wonder the the adaptation went to the number one spot at the box office with a $155 million take.  Fans took to YouTube to post their reactions afterwards, but not all were 100% satisfied.

Helped by positive movie reviews from fans and critics, THE HUNGER GAMES'  $155 million opening weekend made it the third highest opening behind Harry Pottter and the Deathly Hallows Part 2 and The Dark Knight.

Rotten Tomatoes site has aggregated a 87% approval rate from critics while 95% of viewers rated the film positive.

CineMovie gave away advance movie tickets to THE HUNGER GAMES screenings held in 10 U.S. cities nationwide.  CineMovie asked the THE HUNGER GAMES' winners to tell us what they thought about the novel turned movie adaptation in their own words.

Nobody was more skeptical than I about a movie adaptation of the 80s television show executive produced by Jonah Hill, but 21 JUMP STREET turned out to be one of the funniest movies in a long time.