Jessica Alba and Michelle Rodriguez are no strangers to action films so when director Robert Rodriguez called to cast them as butt-kicking leading ladies in the exploitation film MACHETE, they were in, and CineMovie sits down with the tough, sexy ladies of MACHETE for the inside scoop on the highly-awaited, star-studded motion picture.

Director Robert Rodriguez's self-financed action film El Mariachi put Rodriguez on the Hollywood map but his success hasn't compromised his film-making sensibilities. While the Texan native has polished his signature style through the years directing and producing more than 15 films including the successful Spy Kids franchise and El Mariachi trilogy (Desperado, Once Upon A Time in Mexico), he has managed to remain true to his roots but more so with his latest film, MACHETE.

Will Farrell Jokes About Mistreating Co-Stars

Will Farrell stars and produces THE OTHER GUYS with Mark Wahlberg, Eva Mendes, Samuel L. Jackson, and Dwayne Johnson.  As the boss on THE OTHER GUYS set, Farrell jokes he likes to keep it hostile during the production to bring out the tension in a scene. 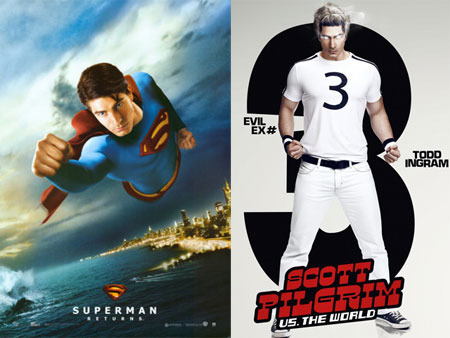 Clobbering a Catholic School girl and pulverizing Superbad's Michael Cera isn't exactly truth, justice and the American way, but Superman Returns star Brandon Routh is turning to the dark side for his new role as an evil telekinetic ex-boyfriend in the new graphic novel adaptation of SCOTT PILGRIM VS. THE WORLD.

Anjelah Johnson: From Raiders Cheerleader To Funny It Girl

Professional football cheerleaders don't typically trade in their pompom's for a stand up routine but Anjelah Johnson did and it's paying off.

The former Oakland Raiders cheerleader went viral in 2007 with her internet sensation Nail Salon. Anjelah took her one woman show on the comedy circuit which landed her on Mad TV as a series regular, a Comedy Central special and a new comedy tour.  The San Jose native is now taking her act to the next level in Hollywood with memorable roles in Our Family Wedding, Alvin and the Chipmunks: The Squeakquel and her voice-over work in Marmaduke.

CineMovie's Zay Zay sat down with the two young actresses who describe their day on set as child actors. Selena also names Leonardo DiCaprio (Inception) as her favorite dreamy actor who she hopes to work with one day and more once she's "legal" joked the Disney star who reaches her eighteenth birthday this month.  Watch the video above.

THE OTHER GUYS leading lady Eva Mendes is one of the few actresses who has transcended all genres playing different types of characters opposite A-List actors Denzel Washington (Training Day, Out of Time), Nicolas Cage (Ghost Rider, The Bad Lieutenant), Johnny Depp (Once Upon A Time in Mexico), Joaquin Phoenix (We Own The Night), and Will Smith (Hitch) but the actress feels the juicy roles have always gone to male actors.

Mexican heartthrob and star of Goal I and Goal II, Kuno Becker returns to the big screen once again as an aspiring athlete in his new movie FROM MEXICO WITH LOVE opening October 8.       Watch Movie Trailer

Kuno tells CineMovie's Viviana Vigil, although he's played a soccer player in Goal I and II and a boxer in his latest film FROM MEXICO WITH LOVE, he's far from being athletic and hates to exercise.  Watch our interview with the up and coming Latino star.

FROM MEXICO WITH LOVE Movie Synopsis

Farm laborer Hector toils in the fields of a Texas ranch by day and moonlights as a boxer by night in whatever impromptu bouts he can line up. The winnings aren’t much, but they help support his ailing mother (Angélica Aragón), who works beside him in the fields. Meanwhile, the ranch’s tyrannical owner has fighting ambitions of his own: his son Robert (Alex Nesic), an all-American playboy, is a rising star on the local boxing scene.

Hector wants to face Robert in the ring—not least because Robert has taken an interest in the beautiful Maria (Garcia), a young worker recently smuggled across the border by the gruff but kindhearted Tito (Bauer). But the ranch owner doesn’t want his son fighting a Mexican “picker.” Hector’s shot at a better life appears doomed when he gets fired after brawling with ranch heavies who have slashed his mother’s pay. Beaten up, broke and jobless, he gets dumped back over the Mexican border for his troubles.

While there, Hector tracks down a veteran boxing trainer (McGill) who takes him under his wing and helps him prepare for the ultimate David-and-Goliath faceoff—a fight against Robert. After some tough negotiating by Tito, the ranch owner agrees to the match. The bout becomes a dramatic showdown between the racist ranchers and the masses of downtrodden farm workers, who see a victory in the ring as a chance to reclaim some of the dignity they’ve lost in the fields. Their hopes rest in the calloused hands of a young hero with something to prove.

It's no secret that the STAR TREK sequel is on track for 2011 with J.J. Abrams producing but not directing.  CineMovie caught up with Nero's right hand Romulan - Clifton Collins, Jr. from this summer's blockbuster at the  ZOMBIELAND black carpet premiere.   Clifton also appeared in Mike Judge's comedy EXTRACT which opened last month starring Justin Bateman, Mila Kunis, and Ben Affleck.

NAPOLEON DYNAMITE (Jon Heder) and NACHO LIBRE (Jack Black) director Jared Hess is back with another offbeat comedy in GENTLEMEN BRONCOS.  Along with his wife Jerusha Hess, the writing and producing team return to the big screen three years after their foray into the world of Mexican wrestling, NACHO LIBRE, and five years after their high school slacker NAPOLEON DYNAMITE became a cult hit.

For GENTLEMEN BRONCOS, the Hesses teamed up once again with actor/writer/director Mike White (School of Rock, Orange County) who also produced their last film, NACHO LIBRE and stars as "Dusty" in the film.

A salute to oddball artistes everywhere, GENTLEMEN BRONCOS weaves together a series of narratives revolving around aspiring writer Benjamin Purvis (The Forbidden Kingdom's Michael Angarano), a loveable underdog whose passion for writing science-fiction novels is turned upside down when his idol, the celebrated fantasy author Dr. Ronald Chevalier (Flight of the Conchords' Jermaine Clement), steals his story at a writers camp.

In keeping with a writer's struggle theme of the movie, CineMovie's Fernando Esquivel sat down with the indie darlings to discuss why it's a good idea to write as a team and how to stay true to the craft of filmmaking.