It seems like a mission impossible but Tom Cruise is back for another action adventure as secret agent Ethan Hunt and the new trailer to the fourth MISSION: IMPOSSIBLE movie is out.

Ryan Reynolds and Jason Bateman do the freaky friday in THE CHANGE-UP.  Ryan and Justin's character accidently switch bodies and mayhem lets loose as previewed in the red-band trailer to the very R-rated comedy.

Chris Evans makes the transformation from skinny runt to Captain America in a new trailer version of CAPTAIN AMERICA: THE FIRST AVENGER.

Grace (Selena Gomez) is an ordinary girl who becomes an accidental princess when a family summer trip to Paris turns into the fantasy of a lifetime.  Living like royalty, Grace, along with her two best friends, discovers who she really is – by assuming another person’s identity.

Grace and Emma, however, will not be deterred from crème brulee by the Seine, and soon enough, the two friends, with Megan in tow, arrive in France.

The pitter patter of happy feet return for more penguin dancing and singing in the sequel to HAPPY FEET.  Watch the teaser trailer for HAPPY FEET 2.

Robert Pattinson and Kristen Stewart finally tie the knot...well at least on screen anyway as Twilight's Edward and Bella. The new teaser trailer for BREAKING DAWN PART I premiered Sunday night on the MTV Awards and we have it for you to watch over and over.

Movie Trailer: Jessica Alba in Spy Kids All The Time In The World

Jessica Alba picks up where the last Spy Kids left off as the new spy who recruits her step-kids to save the world in Robert Rodriguez's SPY KIDS: ALL THE TIME IN THE WORLD. Add a comment

Movie Trailer: Katie Holmes in Don't Be Afraid of the Dark 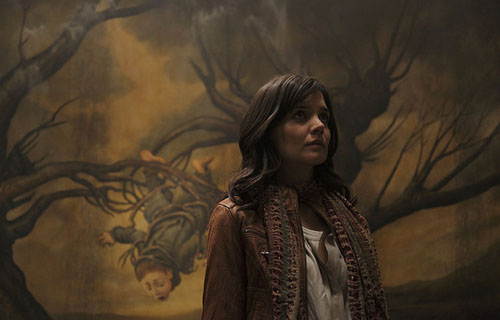 From producer Guillermo del Toro comes a remake of a classic horror film. Don't Be Afraid of the Dark stars Katie Holmes and Guy Pierce. Watch the trailer.

The long-awaited American preview of David Fincher's adaptation of THE GIRL WITH THE DRAGON TATTOO premiered online with the official movie trailer.

Smurfette, Papa Smurf and the rest of the blue gang hit movie theaters this summer in their first movie starring Neil Patrick Harris, Sofia Vergara (Modern Family) and the voices of George Lopez and Katy Perry. Watch the latest trailer.

The long-awaited American preview of  THE GIRL WITH THE DRAGON TATTOO will make its worldwide online debut Thursday, June 2nd with a teaser trailer.