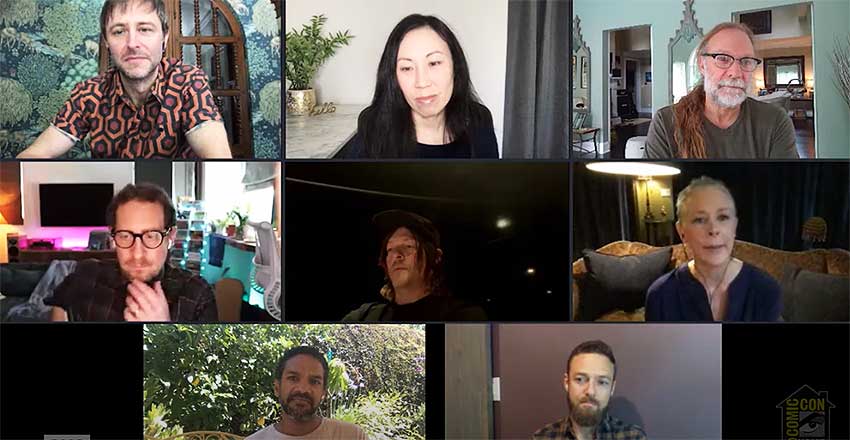 "The Walking Dead" season 10 finale we've all been waiting for impatiently finally has an air date. Friday during "The Walking Dead" Comic Con @Home panel, moderator Chris Hardwick ("Talking Dead") announced the finale will air October 4, but that's not all. Showrunner Angela Kang also announced there will be an additional six episodes beyond that. There was more exciting news coming out of the star-studded panel. Watch panel below.

The first thing they announced was the air date for the finale for season 10 titled "A Certain Doom" which was yanked from the AMC schedule just as the COVID-19 pandemic sent everyone in lockdown. A reason for the delay was never explicitly revealed but perhaps it may not have been  appropriate given the subject matter and title of the episode.  The season 10 finale will premiere October 4, which is ironic given that October is usually the time a new season would begin. However, a new show is premiering in its spot - "The Walking Dead: World Beyond" which was supposed to air after the finale back in April.

Kang also announced that the finale won't be the end of the season. They pulled six more episodes together but they won't air until early 2021. Kang described it as a continuation of season 10 instead of new season. Production on season 11 was halted due to the shutdown so don't expect a new season any time soon which explains why they wrangled up extra episodes.

A new clip was shown during the panel which revealed panic in Alexandra as Beta leads zombies and his Whisperers to battle.  Father Gabriel (Seth Gilliam) gives hope to a pair of young children frightened by the walking swarm headed their way. He reassures them that they have a lot of partners in this fight and not to worry. We see Carol, Daryl and the other TWD characters rushing to their aid as Gabriel narrates.  The final shot of the clip shows the community swarmed with thousands of the undead. It doesn't look good.

In other news, Gimble put out the possibility of bringing back past characters like Steve Yeun's Glenn for possible new content based on the character's early days of the zombie apocalypse. He ruled out the possibility of a series, but more likely short programming. He wasn't specific but in the past they've put out online shorts which they also aired as interstitials during a series run.  Most likely that's the route they may take.