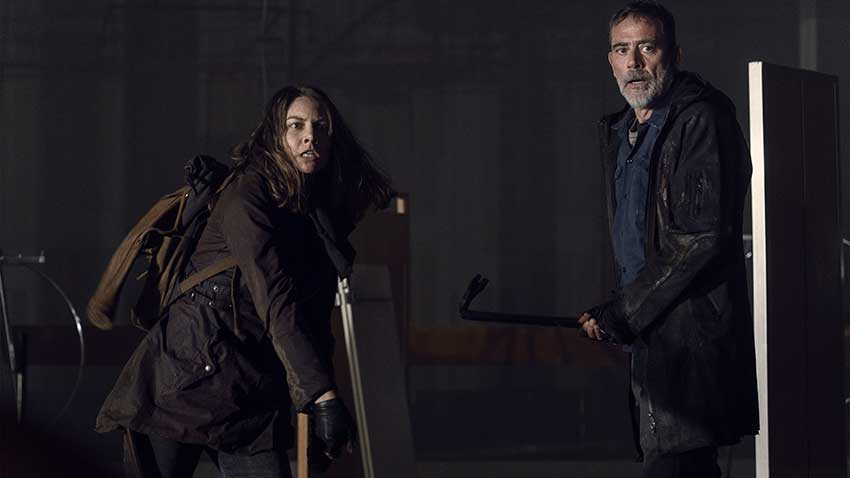 After a slow and rather dull season 10, The Walking Dead’s final season is off to a good start with some nail-biting moments and the ongoing tension between Maggie and Negan. Here’s your complete recap of season 11’s first episode titled Archeron Part 1.

Carol (Melissa McBride), Maggie (Lauren Cohan) and Darrell (Norman Reedus) lead a group to a military armory to collect supplies, food and ammo. The mostly female team propels themselves into a room full of sleeping zombies (who knew the undead took siestas) while the men lower them down.

Just as they’ve collected the needed supplies, a wire snaps cutting Darrell’s arm and a few drops of blood land on the undead, reviving them.

Of course, there are a few close calls for the ladies but they chop into action with Carol remaining behind to ensure everyone gets out.

The group returns to Alexandria and seeing Negan ruins Maggie’s day. A new group of people familiar to Maggie arrives to Alexandria. When two men fight over rations, Father Gabriel (Seth Gilliam) states that even with the new supplies, there’s only enough food for a week.

Carol informs the group two new communities joined Alexander and there are no crops or backstops to feed everyone.

Maggie knows where they can find more food. At Meridian, where she came from there’s “plenty of food, water, crops and animals. Another Meridian resident who just arrived informs them it’s all gone.” Maggie reveals people attacked their community at Meridian and slaughtered many. The threat comes at night and you’re dead before you see them, is how Maggie describes the new menace this season. Maggie suggests taking back her old community from these dangerous people for the food for Alexandria. Aaron (Ross Marquand) thinks it’s a suicide mission. “So you’re leaving to fight ghosts?” says Aaron. Darrell volunteers for the dangerous mission as does Father Gabriel. Carol and Rosita (Christian Serratos) stay behind.

The new group leave at night during a storm, and Negan is with them. Maggie doesn’t want to wait it out and they find the tunnels for the Metro and follow the tracks. In the tunnels, they find doomsday scripture on the wall and strange sounds. Negan says the noises is God telling them to turn around in which Father Gabriel replies, “I’m pretty sure he would’ve run it past me first.” Negan being Negan gives it right back. “Did he direct your one eye ball to this?”

In the next scene, we’re catching up with the four characters who were caught by the storm trooper-like soldiers last season. They are taken to the Commonwealth, and Eugene (Josh McDermott) is first up to be individually “processed” as are Princess (Paola Lazaro), Ezekiel (Khary Payton) and Yumiko (Eleanor Matsuura). The captors or auditors as they call themselves are grilling each of them about their personal lives, health and the community from which they come. The scenes cut back and forth between the characters answering the same questions in a drastically different way.

A guard in an orange storm trooper uniform stands over during the interrogation with no indication of his role in the community but Ezekiel assumes he’s a former beat cop in the way he carries himself. This is apparently Mercer from the comic books

The four regroup in a shared cell and discuss their game plan. Eugene believes they will be processed and accepted but the other three are not convinced. After a sickly prisoner is taken away, they fear the worst. They plan their escape.

We return to the suicide squad in the tunnels. The group comes across a mass grave with bodies wrapped up in plastic. Again Negan fears its a current dumping ground for the people Maggie spoke about earlier. No one wants to listen to Glenn’s killer with Maggie clearly in charge. She orders her group to crack skulls to avoid a zombie resurrection. One big guy nearly kills one of the young foot soldiers. Negan saves him and refuses to move any further in what he describes as a “death march” and Maggie the “Pied Piper." The young kid and Thomas C. Hall’s character agree with Negan that it’s too dangerous to move on.

Negan goes on a tirade accusing Maggie of bringing him along to kill him away from the “prying eyes of Alexandria.” Maggie doesn’t exactly deny it as she holds a gun to his head but she claims he’s there because he knows the way and her main concern is feeding her child and others back at Alexandria.

Meanwhile, the hostages concoct a crazy plan off of Princess’ hilarious observation of the troopers' habits, and they manage to steal two trooper uniforms. As they make their way out of the complex, Yumiko finds a missing person’s board with her picture on it posted by her brother. She has to stay to find him.

Back in the tunnels. the young kid and Howell’s character left with the group’s ammo and weapons. And that’s a cue for the zombie to enter their space. They run but they’re trapped at a dead end. They climb on top of a train’s roof to escape. Darrell’s dog runs through an open space and Darrell leaves the group behind to follow his dog.

Negan and Maggie are the last one’s left. Maggie is unable to climb when a zombie grabs her leg. Negan looks over to find Maggie asking for help but he leaves. THE END

We have already watched next week’s episode, Archeron Part II and it’s one of the best episodes in a long time. Look out for our recap next week.