Interview: Morgan Freeman Narrates 'Born To Be Wild 3D' For A Cause

Morgan Freeman narrated March of the Penguins, the most successful wild life documentary to date and now he lends his voice as the narrator in the heartwarming documentary BORN TO BE WILD 3D, the story of two women who run orphanages for baby elephants and orangutans left to fend for themselves after their mothers are killed, poached, or died from deforestation.

Listen to Morgan Freeman's interview below.

Morgan Freeman told CineMovie at a recent press conference that he receives many offers, "lots of them" according to Freeman,  to narrate projects but the Dark Knight actor sifts through his choices based on whether it resonates with him.  He bases it on three questons. "What is it about? What good is it? What use is it to anybody?"  Once he heard the concept behind BORN TO BE WILD, he was "hooked."

Captured in IMAX 3D, BORN TO BE WILD takes you to the rainforests of Borneo with primatoligist Dr. Birute Mary Galdikas and her work with baby orangutans, to the rugged Kenyan savannah with Dame Daphne M. Sheldrick's shelter for orphaned elephants.  They rescue, rehabilitate, and return the wild animals to their natural habitat once they are ready. 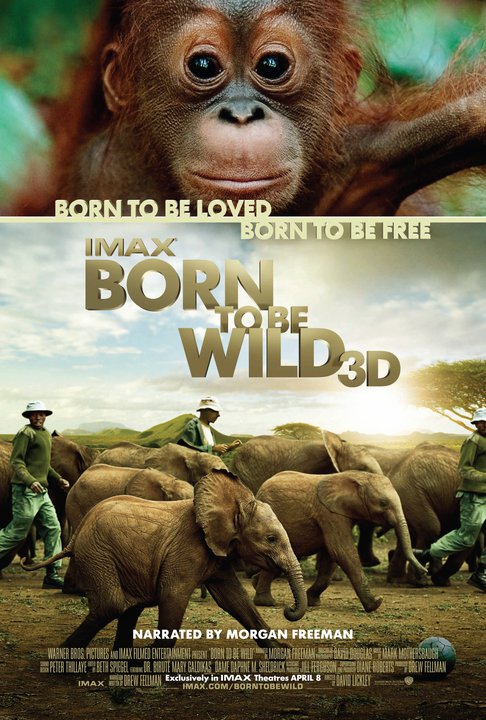 "This particular project is extremely important and well worth doing because #1 it highlights a couple of ladies whose courage and dedication really should be trumpeted."

BORN TO BE WILD also sends a message regarding the materialistic needs of humans, according to Freeman, who feels that animals are not the only ones who will be extinct if we continue destroying habitats.

"It also highlights the danger of what we're doing as humans in terms of the rest of the life forms on the planet. We're not aware as people what we're doing.  We're just blindly going along eliminating habitats, killing off other creatures in order for us to have more room, to grow more food, more for us.  There is an inherit danger in there that we need to somehow publicize -- bring to light. We're going to be eliminating ourselves. We're going to pay the price for it.  People think that we are dominant but we're the dinosaurs."


If you'd like to do your part for these two causes, you can foster a baby elephant or orangutan for as little as $50 a year and they will send you updates on your foster animal.  Visit each site for more information.


http://www.sheldrickwildlifetrust.org/
blog comments powered by DISQUS back to top