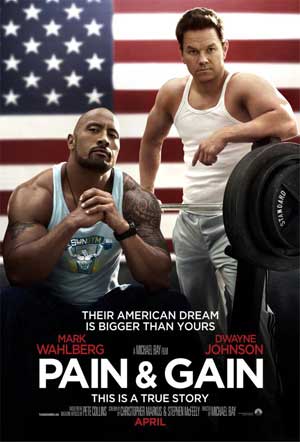 Dwayne Johnson and Mark Wahlberg break out their other guns for their turn as bumbling extortionists. We're used to seeing these two action stars with guns a blazing but in this movie outing, the two break out their hard bodies as body builders turned criminals who kidnap and extort money from the wrong guy. Comedy ensues as the muscle-bound airheads must avoid getting killed by criminals and caught by the cops.

PAIN & GAIN marks Michael Bay's return to the action comedy after focusing on the last three Transformers movie. The PAIN & GAIN preview certainly looks Bay's Bad Boys step-brother with its Miami setting and action style.  Bay is rumored to be working on a third Bad Boys sequel so this makes for good practice.  The experience working with Bay must have been a pleasant one for Wahlberg that he signed up for the next Transformers movie.