The wait is over.  Are fans delighted or disappointed with Marvel's CAPTAIN AMERICA: THE FIRST AVENGER directed by Joe Johnston?

Chris Evans stars as Steve Rogers, Captain America, but you get to know him as a Steve Rogers the wimpy kid who becomes a superhero. Did Chris deliver a worthy performance? What about the effects used to transform Steve Rogers from a runt into a hunk?

CAPTAIN AMERICA: THE FIRST AVENGER focuses on the early days of the Marvel Universe when Steve Rogers (Chris Evans) volunteers to participate in an experimental program that turns him into the Super Soldier known as Captain America. As Captain America, Rogers joins forces with Bucky Barnes (Sebastian Stan) and Peggy Carter (Hayley Atwell) to wage war on the evil HYDRA organization, led by the villainous Red Skull (Hugo Weaving.)

Review: Friends with Benefits Has Its Benefits

Hooray! The romantic comedy slump is over. FRIENDS WITH BENEFITS is smart, sexy, engaging and a lot of fun. And that’s just talking about the co-stars.

If you need escapism from all the superhero and CGI movies, go for the feel-good movie of the summer LARRY CROWNE.

Audiences should be tired of the onslaught of summer time superhero movies, and with CAPTAIN AMERICA: THE FIRST AVENGER joining the crowded movie theaters this weekend, the pressure is on for the Marvel comic to deliver.  Depending on who you talk to, you'll either love or just think it okay.

Has Cameron Diaz ever carried a movie before? This was the first thought that came to my mind when I exited the theatre and every title that I came up with had her in a supporting role or sharing the screen. But in BAD TEACHER, Cameron Diaz is definitely the star. The question is did she pull it off and if so, how did she do? Well after weighing the pros and cons I have to say she managed to hold her own and if I was going to grade the film overall, I think I would have to give it a C; a solid effort, but room for much improvement.

The final Harry Potter film has arrived. Did it satisfy everyone's expectations? Fans weigh in with video movie reviews for HARRY POTTER AND THE DEATHLY HALLOWS PART 2. 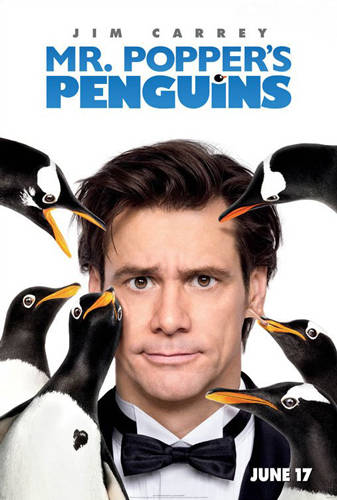 Jim Carrey has returned to the comic silliness that made him a star in MR. POPPER'S PENGUINS. And if you are not already a fan of penguins, you will be.

Everyone loves finding a package on his or her doorstep, but for Tom Popper (Jim Carrey) that experience has lost its thrill. For years his globetrotting father has been sending him exotic gifts from all around the world. As a child Tom Junior loved his dad and was thrilled to follow him on his ham radio at night. But now a package means a missed birthday, Christmas, or other landmark occasion. For “Tippy Toes” Popper a package has become synonymous with disappointment.

As an adult Tom has created his own kind of adventure. He has become one of the premiere real estate developers in New York City and for him New York is the world. To match the prestige of his envious position Popper has traded in all the curios and souvenirs of his youth for a sterile, cold penthouse apartment. He is rich, successful, and at the top of his game, yet he is divorced, alone, and only sees his kids on alternate weekends.

One day Popper receives some devastating news. His father has died on an expedition to Antarctica and during the reading of his will it is revealed to him that Tippy Toes will be receiving one last gift. When it arrives Tom opens the crate with resignation and is surprised to find a frozen box containing a full size Gentoo penguin. Tom is less than thrilled with his father’s gift but admires the expert taxidermy. Little does he know that the penguin is alive and about to upend his life.

Due to a bad phone connection and a language barrier, Tom receives five more penguins. He’s called every agency in the book and no one will take them off his hands. Finally the zoo agrees to give them a home, but before they can pick them up his son mistakes them for his birthday present. Popper decides to go along and now his kids can’t wait to visit him. Enjoying his newfound status as the world’s coolest dad, he puts the zoo off for now and decides to enjoy this time with his kids.

As the needs of the penguins soon outweigh his own Popper begins missing work, changing his priorities and forges a new relationship with his kids (Madeline Carroll and Maxwell Perry Cotton). Even his ex-wife (Carla Gugino) is enamored of his new house guests. For the first time in a long time the family is together and happy.

If you are expecting this film to be similar to the Newbery Award children’s book, let me stop you right here. The original book Mr. Popper’s Penguins written in 1938 by Richard and Florence Atwater has a completely different story line. The only thing that this film shares with the classic tale is the title and a basic premise. But both stories have something to offer. This film just has a different emphasis. In Jim Carrey’s version it is about love, loyalty and a strong sense of family, qualities that penguins exhibit in the wild. You won’t be getting the Popper’s Penguins of your childhood, but you’ll be getting a new story to cherish and love.

Jim Carrey is delightful as Mr. Popper. Using live Gentoo penguins in the making of this film, all his comic skills come into play just to keep up with their chaos. Jim, who loves animals, thoroughly enjoyed the experience, but admits that working in a refrigerated environment was quite a challenge.

Another treat in this film is the return of Angela Lansbury. She plays the fictional owner of Tavern on the Green, Mrs. Van Gundy. This film is a real love letter to New York, and you will thoroughly enjoy visiting some of its most beloved sites.

MR. POPPER'S PENGUINS is a quality family film that everyone can enjoy together. With the mix of live animals, animatronics, and CGI you’ll be hard pressed to tell where the real penguins end and the animated ones begin. To quote Jim Carrey, “They’re like puppies times ten.”

Animals giving dating advice to Kevin James?  ZOOKEEPERS' premise is appropriate for taking the kiddies, but too weak for date night.

Movie Review: The Tree of Life

Does it really matter what critics or fans say? Audiences go to Transformers movies for the spectacle and that's what they can expect again the third time around with a much closer view in 3D.

They say that to really know someone you have to travel with them and after watching THE TRIP, it becomes very clear that you should never enter a car with two British comedians.