Having just watched the original Robocop again on Blu-ray recently, I went into the movie theater expecting a rehash of the 1987 film because that’s what Hollywood likes to do (ie. Carrie). Frankly, Tinseltown has a poor track record with "re-imaginings" as they like to call it. Luckily with this reboot you get something that's worthy of seeing twice, which I did.  There will be those who hate the film, of course because they’ve got nothing better to do, but for the most part, movie-goers should be entertained.

Peter Weller's performance as Robocop definitely goes down as a memorable Hollywood hero so the new Alex Murphy would have to be equally good to make you forget, and Joel Kinnaman steps up to the job. He brings lots of depth emotionally and soon, you get past the Peter Weller comparison. Gary Oldman, as usual, does an exceptional job as the sympathetic character, Dr. Dennett Norton. Michael Keaton is great as the fun but villainous, jean-wearing CEO of OmniCorp. In the original, the OmniCorp executives were stiffs in suits so seeing Keaton play up a more modern version of big business was refreshing. Samuel L. Jackson is hilarious as a Morton Downey, Jr.-style news anchor who clearly has an agenda in his Fox-like propaganda.

In this case, ROBOCOP turns out to be a true 2.0 version, and more layered than the original. While the new movie hits familiar plot points, the rest is fresh and smartly written with socio-political subtext. For example, OmniCorp can only build a part-human/part-robot in Asia because the United States government has banned any sort of cyborg technology. So basically Robocop is "Made in China" like everything else. Later in the story, when everyone is hailing Robocop as the new hero, there are picketers in the background protesting robots taking over human jobs. Small little winks such as those are sprinkled throughout the film. 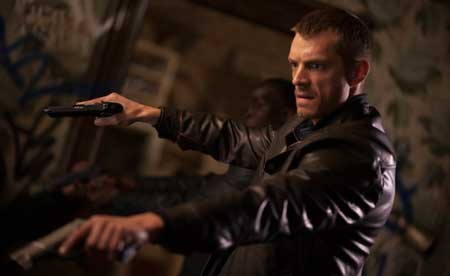 This successful reboot can be attributed to the foreign-born director, José Padilha. The Brazilian filmmaker, best known for his Brazilian action films, makes his Hollywood debut with ROBOCOP. Importing a non-Hollywood helmer was probably the best choice to bring a fresh perspective to the action genre. The directors and writers made a lot of good choices such as keeping Murphy's wife and son in the picture as the moral center and changing up the beats of the story. Like the most recent reboot with Carrie, the story and events were all too similar to the original, but ROBOCOP changed it all up although by the end, you know where it is headed.  Of course they throw in the two famous lines from the movie, but they did it in an unexpected way which came off funny on purpose.

Usually I hate sets up for sequels at the end of movies, which ROBOCOP obviously does, but that’s one follow-up I would actually like to see.

Thank you for your cooperation.