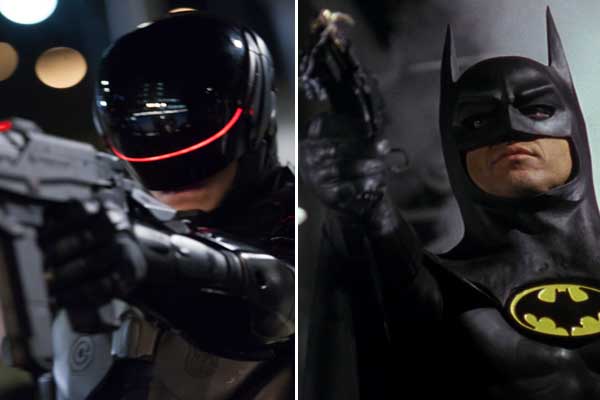 Batman versus ROBOCOP: Who would win? Unfortunately we don't know the answer and probably never will. Although, in a battle of which costume is least comfortable to wear, Cinemovie now knows the“Bat-Suit” would stand victorious.  At a recent press conference for the upcoming reboot of ROBOCOP, ex-Batman Michael Keaton gave little sympathy to newcomer Joel Kinnaman for his challenging experience in the ROBOCOP costume.

ROBOCOP's Joel Kinnaman (The Killing) says that the costume helped him internalize the role, though it proved to be a far greater challenge than he had ever faced before. The first time he tried it on, it was a hot day in Pasadena and it took about an hour and forty-five minutes to put it on. It dug into all the wrong places and was constantly at the wrong temperature, either too hot or too cold. After just 20 minutes, he had to get out of the 45-pound suit to collect himself and clear his mind. Despite the physical adversities, Kinnaman prevailed, and used the discomfort of the suit to help drive his character to the emotional state that needed to be reached.

“The suit became one of the first seeds that led my imagination into the vulnerability that Alex Murphy felt after he became ROBOCOP. This suit that should make me feel so powerful actually made me feel vulnerable.” 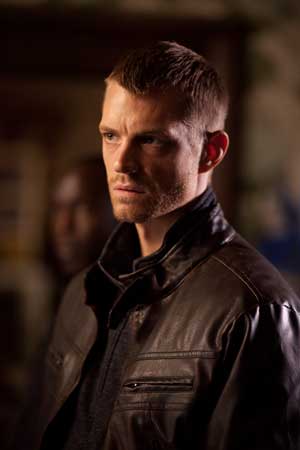 Because the super-cop gear was so physically taxing, Kinnaman realized he needed to get into tiptop shape for the role. The filmmakers discussed that they wanted ROBOCOP to have a  “special-forces” like movement style during the battle sequences. The actor took that as an opportunity to do some training of his own to take command of the suit.

“I was hoping to do most of those movement scenes, so I trained with Swedish Special forces for 3 weeks, and trained with the L.A. Swat Team.”

Michael Keaton who stars alongside Kinnaman, plays the role of Raymond Sellers, the CEO of Omnicorp. Keaton praised Kinnaman’s performance, though he amusingly provided little sympathy for his costume tribulations. Keaton reminisced on his dreadful experience wearing the full-body, rubber “Bat-suit” featured in Tim Burton’s 1989 installment of Batman.

As the claustrophobia set in, Keaton suffered many panic attacks and wasn’t sure how he was going to get through it.   Like Kinnaman, Keaton channeled his fear into creating more emotional depth for his character, which was necessary for the dark, and depressed Bruce Wayne.

“You just take all that stuff the suit was giving me and say ‘Oh, I got it! I know exactly how to do this now. It’s odd how that happens to actors…I think its fear that does it.”

Gary Oldman then quipped, “I had all of that in The Dark Knight, and I wasn't wearing a suit.” 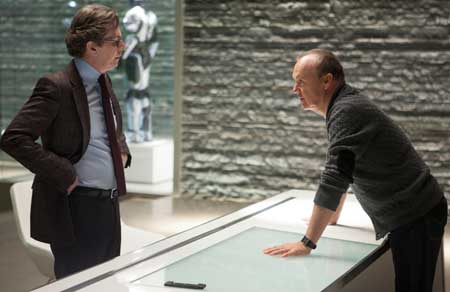 Joel Kinnaman added that he got no love from Michael Keaton when complaining about his suit on set.  “He was like, Shut the f--- up, you’ve got it easy. They had to glue my suit on!”

Hopefully, ROBOCOP gets more love at the box office when it hits theaters February 12th.