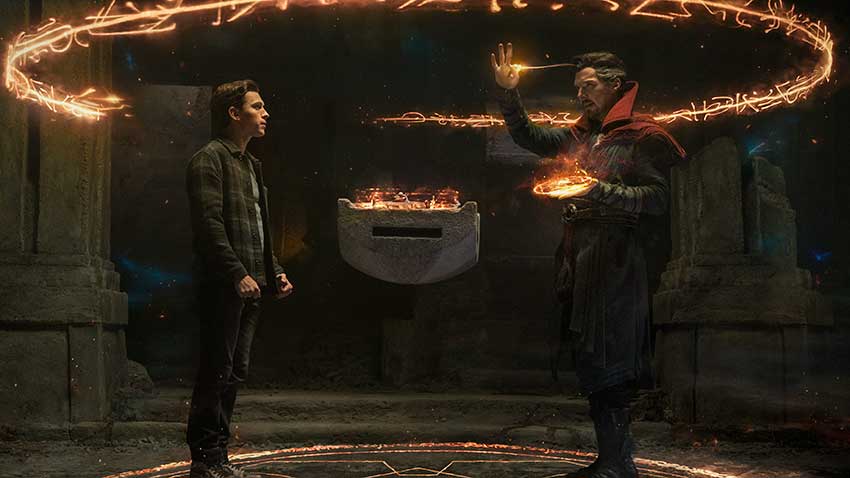 The official SPIDER-MAN: NO WAY HOME trailer has arrived perhaps a bit earlier than expected due to a leaked trailer over the weekend. The new preview has fans studying the footage for any hints of Tobey Maguire or Andrew Garfield, instead, they got a whole new level of speculation about Matt Murdoch, Mephisto and an imposter Doctor Strange (Benedict Cumberbatch).

Rumors have been circulating since production started that the third solo Spider-Man would see the return of prior Spider-Man actors Tobey Maguire and Andrew Garfield in a multi-verse situation. The new trailer does indeed reveal that Doctor Strange brings about the multiverse during a spell gone wrong. However there is no sighting of Maguire or Garfield but their old nemesis's do appear. The most obvious one is Doc Ock with Alred Molina reprising the role. Other hints to prior villains include Goblin's laughter and pumpkin ball and some fans spotted Sandman and Electro in a single frame.

So Sandman is back, I heard The Lizard's roar, electro's yellow lightning, Willem Dofoe back as Goblin, Alfred Molina back as Ock and Charlie Cox's as Matt Murdock. Now all we need is Tobey and Andrew. #SpiderManNoWayHome #SpiderManNoWayHomeTrailer pic.twitter.com/LlPHeLB5TY

In 'One More Day', Peter seeks out Dr. Strange to travel back in time to save Aunt May and prevent the public from finding out he's Spider-Man

He ends up making a deal with Mephisto, who erases his marriage to MJ from history along with everyone knowing he's #SpiderMan pic.twitter.com/i0UaFkaWFp

Benedict Cumberbatch returns to SPIDER-MAN: NO WAY HOME as Doctor Strange, but there's something off about the MCU sorcerer. He easily gives in to Peter Parker's (Tom Holland) request for a spell so the world forgets his identity now that it has been revealed. On Twitter, many are speculating that Doctor Strange is an imposter and Mephisto is in disguise. They claim the image on a protest sign of Parker with devil horns painted on him with the caption "Devil in Disguise" proves that theory.

Other fans fantasize that it's WandaVision's Wanda turned Scarlett Witch bringing about the multiverse to rejoin her fictional children.

The theories are wild but only time will tell when SPIDER-MAN: NO WAY HOME arrives exclusively in movie theaters December 17.

For the first time in the cinematic history of Spider-Man, our friendly neighborhood hero is unmasked and no longer able to separate his normal life from the high-stakes of being a Super Hero. When he asks for help from Doctor Strange the stakes become even more dangerous, forcing him to discover what it truly means to be Spider-Man.