View Comments
It's like the Expendables junior version in the new G.I. JOE: RETALIATION movie poster. Bruce Willis, Channing Tatum, and Dwayne Johnson take full center in the new poster image for the action sequel, but the new trailer focuses on the grand action scenes over mountain tops. 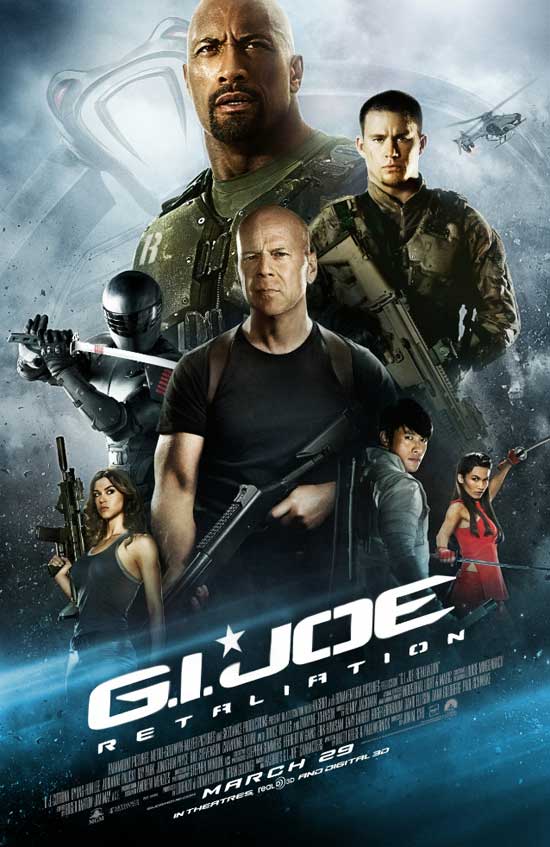 The follow up to the 2009 release continues the adventures of the Hasbro characters with a new cast and returning GI's Channing Tatum and Byung-hun Lee as Storm Shadow. This time, Dwayne Johnson and Bruce Willis take to the fight against Cobra and threats within the U.S. government. The third trailer to the action flick takes the action to the mountain tops with breathtaking stunts over high altitudes while playing over a remix of the White Stripes' Seven Nation Army tune.

Although the original grossed more than $300 million worldwide, the majority of the cast was replaced with bigger box office muscles with Dwayne Johnson and Bruce Willis. While Channing Tatum is featured on the movie poster, he takes a back seat to Willis and Johnson. We're speculating he's one of the casualties in the attack against the G.I. Joes, but the studio is probably regretting that move after he proved a triple threat in 2012 with three box office hits.

You can currently catch a 4-minute 3D preview clip of G.I. JOE: RETALIATION ahead of Hansel and Gretel: Witch Hunters in movie theaters.