The Lambert family just can't catch a break from evil. Patrick Wilson and Rose Bryne return to face the spirit world in INSIDIOUS: CHAPTER 2. Can the sequel scare up the horror the second time around.  Take a look at the first look at the horror film directed by James Wan (Saw, Insidious). 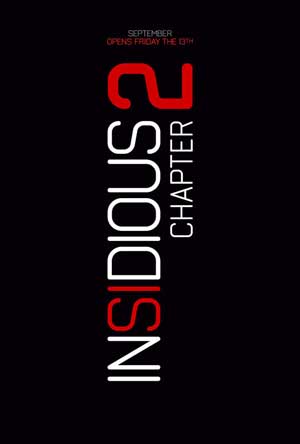 The 2010 low-budget hit became the year's most profitable film after taking in $97 million worldwide. Word-of-mouth helped the film, produced by Paranormal Acitivity creator Oren Peli, gain fans around the world.  In the last film, the Lambert's son was trapped in the spirit world while in a comatose state. Dad Josh turns out also experienced some kind of similar experience as a child and could enter that world to rescue his son.  In INSIDIOUS: CHAPTER 2, it seems Josh not only brought back his son, but other demons along with him.

INSIDIOUS: CHAPTER 2 appropriately opens in September on Friday the 13th.

Official Movie Synopsis:
The famed horror team of director James Wan and writer Leigh Whannell reunite with the original cast of Patrick Wilson, Rose Byrne, Lin Shaye, Barbara Hershey and Ty Simpkins in INSIDIOUS: CHAPTER 2, the terrifying sequel to the acclaimed horror film, which follows the haunted Lambert family as they seek to uncover the mysterious childhood secret that has left them dangerously connected to the spirit world.