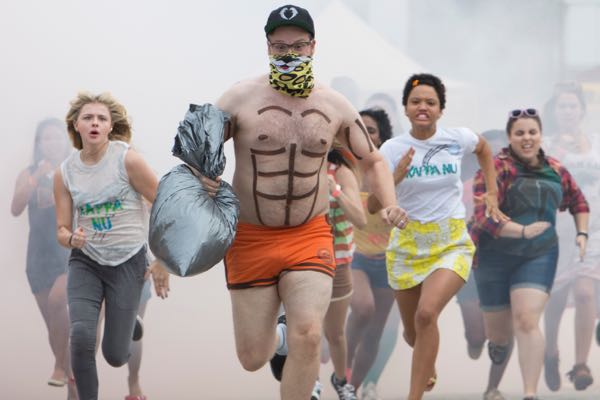 Returning stars Seth Rogen, Zac Efron and Rose Byrne are joined by Chloë Grace Moretz for NEIGHBORS 2: SORORITY RISING, the follow-up to 2014’s most popular original comedy.  Now that Mac (Rogen) and Kelly Radner (Byrne) have a second baby on the way, they are ready to make the final move into adulthood: the suburbs.  But just as they thought they’d reclaimed the neighborhood and were safe to sell, they learn that the new occupants next door are a sorority even more out of control than Teddy (Efron) and his brothers ever dreamed of being.

Forced to turn to the one ex-neighbor with the skills to bring down the new Greeks next door, the Radners—alongside best friends Jimmy (Ike Barinholtz) and Paula (Carla Gallo)—bring in charismatic Teddy as their secret weapon.  If he can infiltrate the sorority and charm his way through it, the thirtysomethings will shutter the Kappas’ home.  But if they think that their neighbors are going down without a fight, they have severely underestimated the power of youthful ingenuity and straight-up crazy.

NEIGHBORS 2: SORORITY RISING – In Theaters May 20

To enter the MOTHER'S DAY Ticket Giveaway, click on the form below.

PROMOTION DESCRIPTION:  MOTHER'S DAY Ticket Giveaway (“Sweepstakes”) begins on or about May 2, 2016 at 6:00 p.m. Eastern Time ("ET") and ends on May 15, 2016 at 11:59 p.m. ET (the “Sweepstakes Period”).  At the end of the Sweepstakes Period, a random drawing will be conducted to select winners from among all eligible entries received, as more fully set forth in the OFFICIAL RULES.  Entry in the Sweepstakes does not constitute entry into any other promotion, contest or sweepstakes.  By participating in the Sweepstakes, each entrant unconditionally accepts and agrees to comply with and abide by these Official Rules and the decisions of CineMovie TV, 2700 Arlington Ave. Ste. 101 Torrance, CA  90501 (“Sponsor”), which shall be final and binding in all respects.