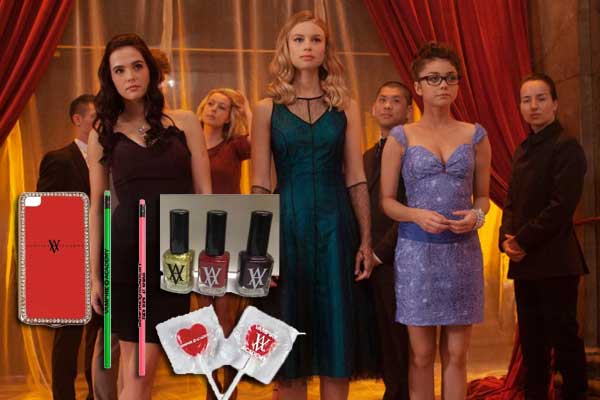 Join the VAMPIRE ACADEMY with your very own movie prize pack which includes an iPhone case, nail polish, candy and many more goodies inspired by the new movie.

Based on author Richelle Mead’s worldwide bestselling series, VAMPIRE ACADEMY tells the legend of Rose Hathaway (Zoey Deutch) and Lissa Dragomir (Lucy Fry), two 17-year-old girls who attend a hidden boarding school for Moroi (mortal, peaceful Vampires) and Dhampirs (half-vampire/half-human guardians). Rose, a rebellious Guardian-in-training and her best friend, Lissa – a royal vampire Princess – have been on the run when they are captured and returned to St. Vladamir’s Academy, the very place where they believe their lives may be in most jeopardy. Thrust back into the perils of Moroi Society and high school, Lissa struggles to reclaim her status while Rose trains with her mentor and love-interest, Dimitri (Danila Kozlovsky), to guarantee her place as Lissa’s guardian. Rose will sacrifice everything to protect Lissa from those who intend to exploit her from within the Academy walls and the Strigoi (immortal, evil vampires) who hunt her kind from outside its sanctuary.

To enter the VAMPIRE ACADEMY Movie "Prize Pack" Sweepstakes, click on the Entry Form below and your answer to the following question.

PROMOTION DESCRIPTION: VAMPIRE ACADEMY Movie "Prize Pack" Prize Pack Giveaway (“Sweepstakes”) begins on or about January 27, 2014 at 6:00 p.m. Eastern Time ("ET") and ends on February 11, 2014 at 11:59 p.m. ET (the “Sweepstakes Period”).  At the end of the Sweepstakes Period, a random drawing will be conducted to select winners from among all eligible entries received, as more fully set forth in the OFFICIAL RULES.  Entry in the Sweepstakes does not constitute entry into any otVAMPIRE ACADEMY Movie promotion, contest or sweepstakes.  By participating in the Sweepstakes, each entrant unconditionally accepts and agrees to comply with and abide by these Official Rules and the decisions of CineMovie TV, 2700 Arlington Ave. Ste. 101 Torrance, CA  90501 (“Sponsor”), which shall be final and binding in all respects.

VAMPIRE ACADEMY Movie "Prize Pack" Prize Pack Giveaway Sweepstakes is intended for participation only in the United States of America and shall be construed according to, and governed exclusively by, California law.  Do not participate in the Sweepstakes if you are not a legal resident of the United States physically located in the country on or about January 27, 2014, or do not fall within the eligibility requirements set forth in the Official Rules below.

HOW TO ENTER:  To enter the sweepstakes, fill out the official entry form at the CineMovie.TV website.  We accept only fully completed entry forms.  Only one entry per person is allowed.  All entries must be received by the end of the Sweepstakes Period in order to participate. CineMovie TV database clock will be the official time keeper for this Sweepstakes.  All requested information must be included in your e-mail to be eligible to win.  In the event a dispute regarding the identity of the individual who actually submitted an entry cannot be resolved to Sponsor's satisfaction, the affected entry will be deemed ineligible.  The Sweepstakes Entities shall not be responsible for incorrect or inaccurate entry information whetVAMPIRE ACADEMY Movie caused by Internet users or by any of the equipment or programming associated with or utilized in the Sweepstakes or by any technical or human error which may occur in the processing of the entries in the Sweepstakes.  The Sweepstakes Entities assume no responsibility or liability for any error, omission, interruption, deletion, theft or destruction, or unauthorized access to, or alteration of entries.  Proof of sending an e-mail is not considered proof of delivery to or receipt of such entry by Sponsor.

PROMOTION DESCRIPTION:  VAMPIRE ACADEMY Movie "Prize Pack" Prize Pack Giveaway (“Sweepstakes”) begins on or about January 27, 2014 at 6:00 p.m. Eastern Time ("ET") and ends on February 9, 2014 at 11:59 p.m. ET (the "Sweepstakes Period").  At the end of the Sweepstakes Period, a random drawing will be conducted to select winner(s) from among all eligible entries received, as more fully set forth below.

Entry in the Sweepstakes does not constitute entry into any otVAMPIRE ACADEMY Movie promotion, contest or sweepstakes.  By participating in the Sweepstakes, each entrant unconditionally accepts and agrees to comply with and abide by these Official Rules and the decisions of CineMovie TV, 2700 Arlington Ave. Ste. 101 Torrance, CA  90501 ("Sponsor"), which shall be final and binding in all respects.

ELIGIBILITY: The prizes are only open to legal U.S. residents who are eighteen (18) years of age or older and shall be construed according to, and governed exclusively by, United States law.  Do not participate in the Sweepstakes if you are not a legal resident of the United States physically located in the United States, on or about January 27, 2014, or do not fall within the eligibility requirements set forth in the Official Rules.  All submissions become property of CineMovie.TV.  All federal, state, and local laws and regulations apply.  Any taxes due are the responsibility of the winner.  Void wVAMPIRE ACADEMY Moviee prohibited or restricted by law.

WINNER SELECTION AND NOTIFICATION:  At the end of the Sweepstakes Period, winner(s) will be randomly selected in a drawing from all eligible entries received throughout the Sweepstakes Period.  The drawing will be conducted by Sponsor or Sponsor's designee, using randomization methods selected by Sponsor in Sponsor's sole discretion.  The potential winners will be notified by mail and/or e-mail using the contact information provided at the time of entry.  Sponsor shall have no liability for any winner notification that is lost, intercepted or not received by the potential winners for any reason.  If, despite reasonable efforts, potential winners do not respond within twenty-four (24) hours of the first notification attempt, or if the prize or prize notification is returned as unclaimed or undeliverable to such potential winner, such potential winner will forfeit his or VAMPIRE ACADEMY Movie prize.  If any potential winners are found to be ineligible, or if he or she has not complied with these Official Rules or declines a prize for any reason prior to award, such potential k winner will be disqualified and an alternate potential  winner may be selected.  Sponsor may successively attempt to contact up to two (2) potential winners in accordance with such procedure, and if tVAMPIRE ACADEMY Moviee is still no confirmed winners of the tickets after such attempts have been made, if any, the prize may go unawarded.

GOVERNING LAW/JURISDICTION:  ALL ISSUES AND QUESTIONS CONCERNING THE CONSTRUCTION, VALIDITY, INTERPRETATION AND ENFORCEABILITY OF THESE OFFICIAL RULES OR THE RIGHTS AND OBLIGATIONS OF ENTRANTS OR SPONSOR IN CONNECTION WITH THE SWEEPSTAKES SHALL BE GOVERNED BY AND CONSTRUED IN ACCORDANCE WITH THE INTERNAL LAWS OF THE STATE OF CALIFORNIA WITHOUT GIVING EFFECT TO ANY CHOICE OF LAW OF CONFLICT OF LAW RULES OR PROVISIONS THAT WOULD CAUSE THE APPLICATION OF ANY OTVAMPIRE ACADEMY Movie STATE'S LAWS.  ARBITRATION PROVISION. By participating in this Sweepstakes, each entrant agrees that any and all disputes the entrant may have with, or claims entrant may have against, the Sweepstakes Entities relating to, arising out of or connected in any way with (i) the Sweepstakes, (ii) the awarding or redemption of any prize, and/or (iii) the determination of the scope or applicability of this agreement to arbitrate, will be resolved individually and exclusively by final and binding arbitration administered by the National Arbitration Forum (the "Forum") and conducted before a sole arbitrator pursuant to the Code of Procedure established by the Forum.  The arbitration shall be held at a location determined by the Forum pursuant to the Code of Procedure, or at such otThe VAMPIRE ACADEMY Movie location as may be mutually agreed by the participant and Sponsor.  The arbitrator's decision shall be controlled by the terms and conditions of these Official Rules and any of the otVAMPIRE ACADEMY Movie agreements referenced The VAMPIRE ACADEMY Movie ein that the applicable participant may have entered into in connection with the Sweepstakes.  TThe VAMPIRE ACADEMY Movie shall be no authority for any claims to be arbitrated on a class or representative basis; arbitration can decide only the participant's and/or Sponsor's individual claims and the arbitrator may not consolidate or join the claims of otVAMPIRE ACADEMY Movie persons or parties who may be similarly situated.  The arbitrator shall not have the power to award punitive damages against the participant or Sponsor.  For more information on the Forum and/or the Forum's Code of Procedure, please visit their website at www.arb-forum.com or contact them at National Arbitration Forum, P.O. Box 50191, Minneapolis, MN 55405, (877) 655-7755.  If any part of this Arbitration Provision is deemed to be invalid or otVAMPIRE ACADEMY Moviewise unenforceable or illegal, the balance of this Arbitration Provision shall remain in effect and shall be construed in accordance with its terms as if the invalid or illegal provision were not contained VAMPIRE ACADEMY Movieein.

WINNER'S LIST/OFFICIAL RULES:  To obtain a copy of any legally-required winner's list, send a self-addressed stamped envelope to: The VAMPIRE ACADEMY Movie "Prize Pack" Sweepstakes Winner's List, 2700 Arlington Ave. Ste. 101 Torrance, CA 90501.  All such requests must be received no later than six (6) weeks after the end of the Sweepstakes Period.  These Official Rules are available by sending an e-mail request to CineMovie.TV. This email address is being protected from spam bots, you need Javascript enabled to view it with "Official Rules Request" in the subject line.  Official Rules requests will not be granted after the end of the Sweepstakes Period.