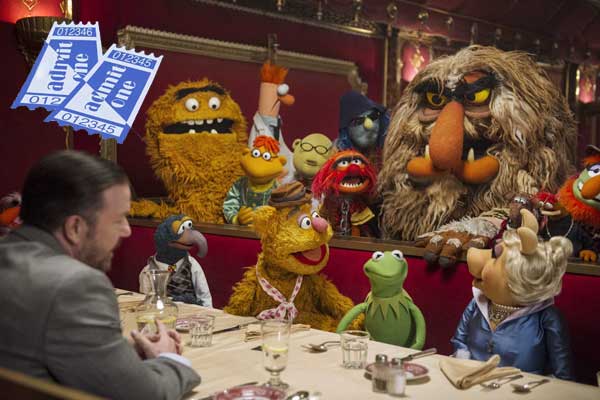 The Muppets return for a new adventure in MUPPETS MOST WANTED, and CineMovie has a family pack of four tickets to go see Kermit, Miss Piggy and the rest of the gang in an advance screening in Los Angeles. Read on to find out how you can qualify.

Disney’s MUPPETS MOST WANTED takes the entire Muppets gang on a global tour, selling out grand theaters in some of Europe’s most exciting destinations, including Berlin, Madrid, Dublin and London. But mayhem follows the Muppets overseas, as they find themselves unwittingly entangled in an international crime caper headed by Constantine—the World’s Number One Criminal and a dead ringer for Kermit the Frog—and his dastardly sidekick Dominic, aka Number Two, portrayed by Ricky Gervais. The film stars Tina Fey as Nadya, a feisty prison guard, and Ty Burrell as Interpol agent Jean Pierre Napoleon. Watch trailer.

Starring Ricky Gervais, Ty Burrell and Tina Fey, Disney’s MUPPETS MOST WANTED takes the entire Muppets gang on a global tour where they find themselves unwittingly entangled in an international crime caper.

To enter the MUPPETS MOST WANTED Movie Ticket Giveaway, click on the Entry Form below.

PROMOTION DESCRIPTION: MUPPETS MOST WANTED Giveaway (“Sweepstakes”) begins on or about March 12, 2014 2013 at 6:00 p.m. Eastern Time ("ET") and ends on March 19, 2014 at 11:59 p.m. ET (the “Sweepstakes Period”).  At the end of the Sweepstakes Period, a random drawing will be conducted to select winners from among all eligible entries received, as more fully set forth in the OFFICIAL RULES.  Entry in the Sweepstakes does not constitute entry into any other promotion, contest or sweepstakes.  By participating in the Sweepstakes, each entrant unconditionally accepts and agrees to comply with and abide by these Official Rules and the decisions of CineMovie TV, 2700 Arlington Ave. Ste. 101 Torrance, CA  90501 (“Sponsor”), which shall be final and binding in all respects.