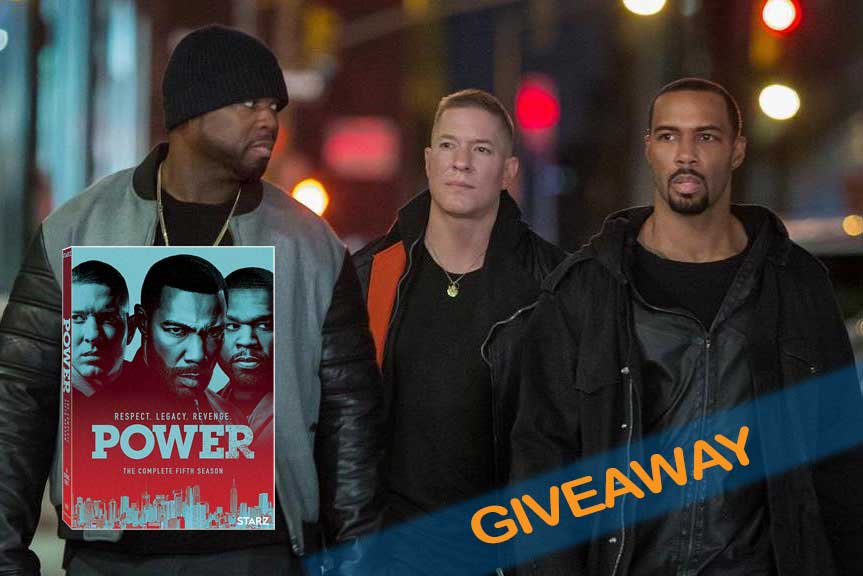 Starz’s “Power” season 5 has arrived on Blu-ray and DVD, and CineMovie is giving away “Power”: The Complete Fifth Season DVD to three winners. Enter below.

“Power”: The Complete Fifth Season, from creator and showrunner Courtney A. Kemp (TV’s “The Good Wife”) and executive producer Curtis “50 Cent” Jackson, follows James “Ghost” St. Patrick’s dangerous alliance with former drug partner and brother-in-arms Tommy Egan and mortal enemy Kanan Stark. As Ghost mourns his daughter’s death, he searches for vengeance and throws himself into his work, reaching new professional heights. But his quest for blood threatens to dismantle his legitimate legacy. He’s blind to new enemies, and as the feds grow closer to unmasking his true identity, Ghost must remain vigilant toward those wanting to take him down for his past criminal enterprises.

The ratings-smash hit ranked as the #2 premium scripted series in 2018 among P18-49 and P25-54, behind “Westworld,”* making Season 5 an instant fan favorite. Described as “the show we wait all year to watch” by Lea Palmieri (Decider), the “Power”: The Complete Fifth Season Blu-ray and DVD will be available for the suggested retail price of $39.95 and $34.98, respectively.

Season Six of “Power” premieres later this year on the STARZ app (and On Demand).

CLICK BELOW TO ENTER FOR YOUR CHANCE TO WIN

PROMOTION DESCRIPTION: POWER: THE COMPLETE FIFTH SEASON DVD Giveaway (“Sweepstakes”) begins on or about May 18, 2019 at 6:00 p.m. Eastern Time ("ET") and ends on May 24, 2019 at 11:59 p.m. ET (the “Sweepstakes Period”).  At the end of the Sweepstakes Period, a random drawing will be conducted to select winners from among all eligible entries received, as more fully set forth in the OFFICIAL RULES.  Entry in the Sweepstakes does not constitute entry into any other promotion, contest or sweepstakes.  By participating in the Sweepstakes, each entrant unconditionally accepts and agrees to comply with and abide by these Official Rules and the decisions of CineMovie TV, 2700 Arlington Ave. Ste. 101 Torrance, CA  90501 (“Sponsor”), which shall be final and binding in all respects.

POWER: THE COMPLETE FIFTH SEASON DVD Sweepstakes is intended for participation only in the United States of America and shall be construed according to, and governed exclusively by, California law.  Do not participate in the Sweepstakes if you are not a legal resident of the United States physically located in the country on or  about January 1, 2019, or do not fall within the eligibility requirements set forth in the Official Rules below.

PROMOTION DESCRIPTION: POWER: THE COMPLETE FIFTH SEASON DVD (“Sweepstakes”) begins on or about May 18, 2019 at 6:00 p.m. Eastern Time ("ET") and ends on May 24, 2019 at 11:59 p.m. ET (the "Sweepstakes Period").  At the end of the Sweepstakes Period, a random drawing will be conducted to select DVD winners from among all eligible entries received, as more fully set forth below.

WINNER'S LIST/OFFICIAL RULES:  To obtain a copy of any legally-required winner's list, send a self-addressed stamped envelope to: POWER: THE COMPLETE FIFTH SEASON DVD Sweepstakes Winner's List, 2700 Arlington Ave. Ste. 101 Torrance, CA 90501.  All such requests must be received no later than six (6) weeks after the end of the Sweepstakes Period.  These Official Rules are available by sending an e-mail request to CineMovie.TV. This email address is being protected from spam bots, you need Javascript enabled to view it with "Official Rules Request" in the subject line.  Official Rules requests will not be granted after the end of the Sweepstakes Period.