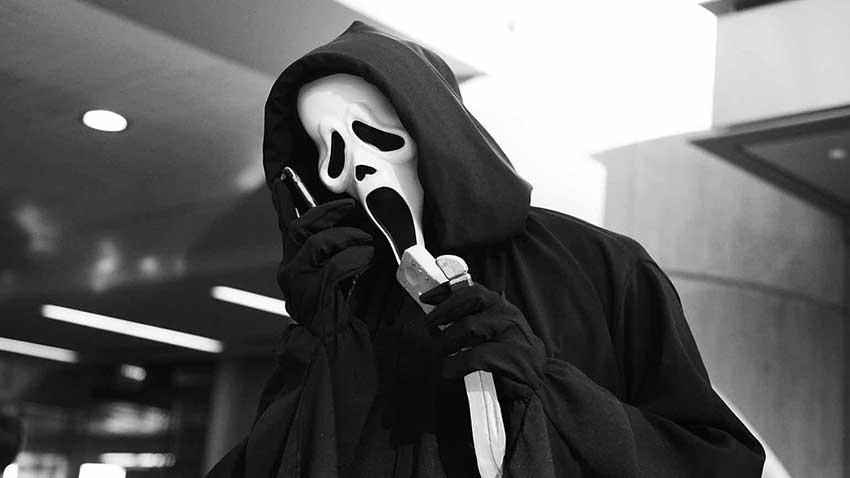 The latest SCREAM movie started production in October with legacy characters returning along with a largely young and diverse cast. During the COVID-19 pandemic, press is not allowed to the quarantined set so CineMovie Zoomed with the filmmakers to discuss expectations from the new movie and why they’re keeping the identity of the killer secret from the cast.

Courtney Cox, David Arquette, Marley Shelton and Neve Campbell return to the SCREAM franchise. New to the cast are Dylan Minnette (“13 Reasons Why”), Jack Quaid (“The Boys”), Melissa Barrera (“Vida”), Jenny Ortega (“Elena of Avalor”) and many other fresh and diverse faces.

Radio Silence, the filmmakers behind READY OR NOT, take the reins on a new story. CineMovie chatted with director Tyler Gillett, co-director Matt Bettinelli-Olpin, executive producer Chad Viillella of Radio Silence and producer William Sherak to get the exclusive scoop. The directors describe themselves as “mega fans” of the franchise and they tell CineMovie the original Wes Craven film had a huge influence on their hit film, READY OR NOT. Craven’s body of work is also a source of inspiration to the directing duo. “The level of respect I have for his work, it’s really impossible to express what that is,” says Matt.

To work on a new SCREAM movie is “mind-blowing” says the directors, and a “dream come true.” When they first read the script, they were hooked on page one with the balance of humor and scares. It took them four hours to read through it because they had to stop and discuss the brilliance of the writing by screenwriters Guy Busick and James Vanderbilt. The writers were also “mega fans” of the genre, and it showed. “There wasn’t a false note,” according to the directors.

While they kept mum on details surrounding the storyline, they did reveal some interesting particulars. CineMovie spoke to the filmmakers when they were half way through the production in mid-October and the cast and crew were quarantined to the hotel and set. Adding to the stir-craziness of a closed set, the cast were not privy to the identity of Ghostface.

“We’re keeping it very, very highly locked,” says Sherak. He adds they wanted the cast constantly guessing the outcome. Different drafts have been circulating around to throw off their predictions in addition to opposing schedules to keep up the secrecy. “A lot of cast members are very upset at us,” admits Chad.

The group revealed what to expect from the new SCREAM. The film will continue in the tradition of the franchise with conversations about the state of pop culture. That includes commentary on current trends in the horror genre. However, when the original was released horror movies were not in the mainstream, according to Matt, unlike today with horror movies dominating theaters and streaming platforms. Their aim, however, is to remain true to the originals, and be scary.

The social media craze will also play a part in SCREAM as part of the commentary on pop culture but they promise it won’t be “heavy-handed” or “preachy.” “It feels so much like a fabric baked into the idea of what the conceit is,” says Tyler.

So how do they keep the storyline fresh after four movies? Obviously they don’t offer up any details about the story but they do say “it’s undeniable new and something so undeniably SCREAM.”

The same goes for the kills. They promise kills will be fresh, but it was challenging and invested lots of time ensuring they are worthy follow-ups. However, they do follow Craven’s rules for death scenes.

“You can’t have fun watching someone die. You have to consider a human being suffering. Other than that, it’s farcical,” which one of the directors says is fine for movies like FINAL DESTINATION but not in the SCREAM franchise.

Woodsboro, the small American town setting for all the movies, has evolved. The new cast represent what America looks in this updated version with black, LGBTQ and Latino actors rounding out the cast.

“Diversity is and should be at the forefront of what communities look like,” says Sherak.

Judging by the cast list, they may have succeeded.

These filmmakers seems like the perfect choice to helm this reincarnation. SCREAM is set for release in 2022.