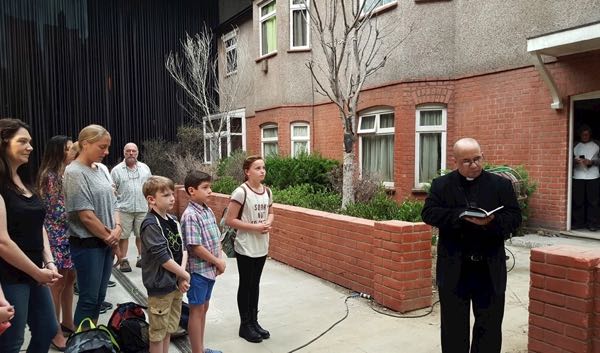 How's this for freaky? James Wan returns to direct the follow-up to THE CONJURING, and before production commenced, a priest was brought in to bless the Los Angeles set. The director shared the first photo from the set on Facebook.

Vera Farmiga, Patrick Wilson, Ron Livingston and Lili Taylor reprise their roles in THE CONJURING 2, and given it’s based on a true story - it might not be a bad idea to rid the set of evil spirits especially after what Vera Farmiga told us. During an interview with the actress, she shared an image on her iPhone of the scratches she found on her thigh after reading the script. Chills!

When production began on Monday, September 21, the cast and crew invited Catholic priest Fr Steve Sanchez to cleanse and protect the set from evil spirits with a traditional religious blessing ceremony. THE CONJURING franchise is based on the true story of paranormal investigators Ed and Lorraine Warren and the demonic possessions they've encountered.

Horror films like THE CONJURING release a lot of negative energy because the actors are consistently exposed to and the cast might accidentally call on evil spirits without realizing, so the blessing is intended keep the cast and crew safe during the production.

Blessing ceremonies are a Catholic tradition that is very common on Hispanic households. It is traditional to bring a priest to bless a house by saying a prayer and sprinkling holy water when you just move in to a new home to release any spirits trapped in the location and to protect the home from evil.

Fr Sanchez blessed director James Wan, cast members Madison Wolfe, Benjamin Haigh, and Patrick McAuley and the crew and then moved into the house set where he blessed and sprinkled holy water on all the different sets.

THE CONJURING’s Vera Farmiga Haunted Before and After Movie, Shows Us Proof

Meet the Real Family Behind the Horror Tale of THE CONJURING