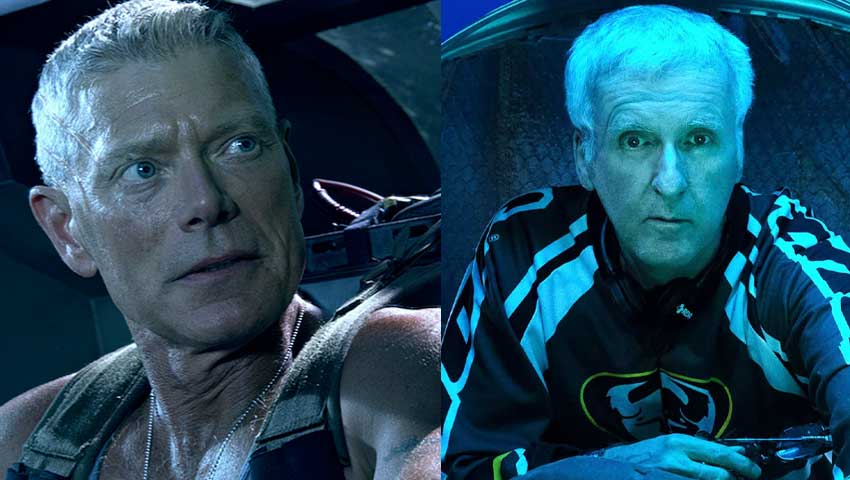 Stephen Lang’s Colonel Miles Quaritch met his end in 2009’s AVATAR as did Sigourney Weaver’s Dr. Grace Augustine but James Cameron resurrects the actors in a different form for AVATAR: THE WAY OF WATER. This time, Lang says there’s more satisfaction in playing a more complicated character, and the actor also reveals Cameron’s competitive side.

AVATAR: THE WAY OF WATER revisits Pandora a decade after Sully and the Na’vi fought off the human invaders. The threat returns to once again deplete the planet of its natural resources and enslave the Na’vi.

Lang admits his AVATAR villain was a one-note character as the militant Colonel Quaritch, so he was excited to return to “expand” the character.

“I was just so honored to be able to deepen and expand on the vision that Jim had for this character,” he said at the London press conference. “I think in the first film he’s very, very colorful, he’s got personality, he’s got some great qualities. But essentially he moves through like a mindless shark, in a way. But in this iteration of it, first of all, there’s the absolute magnificent irony that Jim has written of coming back as the very thing he has been trying to destroy. And having to make the adjustment to that, to adapt to that. And I think it’s just, it’s been a… it was a total pleasure for me to continue to massage this character, and find the depth, and maybe some of the humanity that’s in him. He’s such a warm character, and beloved by so many… (Laughter) You should stop me.”

Lang credits Cameron but the filmmaker reveals the two collaborated much more the second time around to give his new character much more emotional depth.

“He’s being humble, he brought… clearly when you see the film, you see how critical he is, and how complex his character is.” Cameron said of Lang. “But I just want to shout out that Stephen is also a screenwriter, very accomplished, and he actually brought ideas that I was able to incorporate in the writing phase, we have a kind of a shorthand that way.”

Lang describes his working relationship with Cameron as “very good.” The two often competed on set as the alpha with Lang staying in character during the production.

“I play an alpha, and he is an alpha, and so actually who owns that set when you come on there, and what we found was that we tend to work together in a very public way,” Lang revealed. “As a matter of fact, it’s almost a performance, and I know for a fact that the crew always enjoyed it when we were working together because he’s always beating up on me, and I’m, you know, beating up on him to the extent I feel comfortable doing.”

The actor and the filmmaker, however, sparred before coming to set to work out all that alpha energy beforehand.

“It’s a sick love,” Cameron joked. (Laughter) But just to put it in context. Just about every day before we went on the capture, in the capture volume, we spent an hour working out, doing Mkay Thai kickboxing, and punching the crap out of each other.”

Catch Stephen Lang’s return to Pandora in AVATAR: THE WAY OF WATER in movie theaters on December 16.