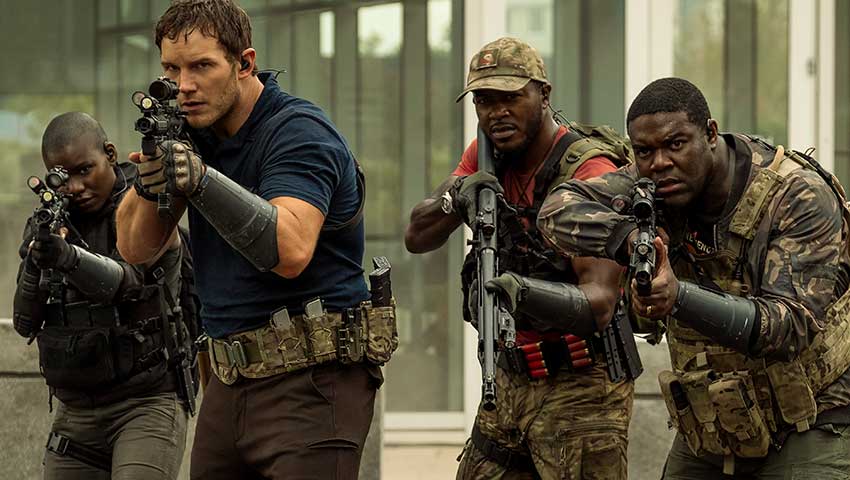 Chris Pratt, Yvonne Strahovski, (The Handmaid's Tale), J.K. Simmons, Jasmine Matthews, and Keith Powers fight alien monsters in THE TOMORROW WAR. While the actors show bravery on screen, the actors’ fear of heights set in when it was time for their high-flying stunts.

In Amazon’s THE TOMORROW WAR, a group of time travelers from 30 years in the future arrive in the present day to recruit civilians and soldiers to help fight an alien invasion in the future. Pratt’s Dan Forester, a former soldier, is one of those drafted and sent to the future to save the world.

The cast featured in the future timeline performs the majority of the stunts. At the recent press conference for the movie, Pratt, Strahovski, Matthews, and Powers admitted they were frightened during certain action sequences.

For Strahovski and Pratt, an action scene required them to run across some metal beams high on top of a structure. The location was on-site at a power plant, according to the actress in this interaction between Strahovski, Pratt, and director McKay. 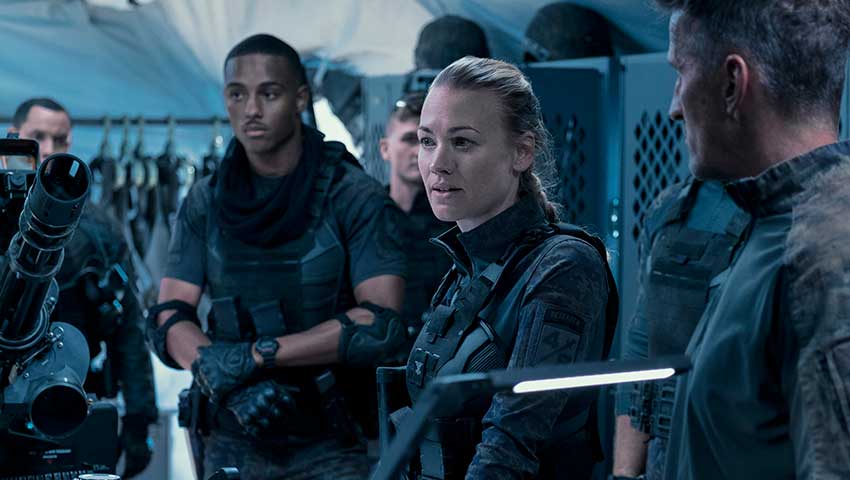 Yvonne: I just keep thinking of that moment where Chris and I were at the top of a power plant and we had to run across this steel beam at the very top of the power plant, but you could see the very bottom, the ground because everything in a power plant is made out of metal grade, so you can totally see through each level all the way to the bottom. I'm not too afraid of heights, but this was a moment where I was like, "Oh, God." Getting up on that steel beam, I thought- I wasn't sure if I could actually run across it.

We were obviously on wires, but just getting used to doing the first few couples of walks across was- you really get to channel your inner zen, and then just have blind faith that you're going to run across that thing and not fall off. If you do, they're going to catch you, but still, a little terrifying.

McKay: That was like the first day or second day, wasn't it?

Pratt: That beam was narrow too. Yes, they're gonna catch you if you fall, but not before like careening your shins, chest, face, and elbows off of this beam. You won't fall to your death, but you'll certainly be hurt. That was intense. You were so good at it, way better than me. You're like, "Oh, God, let me get a couple of chances at this," and you walked across, and then you ran across. I was like, "This is crazy. These beams are more narrow than my foot." I don't know how you-- You have a good center of gravity or balance or something, but I just saw you-- Maybe it's because of all your work on Chuck, you just know how to just jump right into the action stuff, but that was hard.

Pratt: Maybe. It didn't seem like you were scared.

Another scene called for Strahovski to propel down from a Blackhawk helicopter along with real Navy SEALs. She reveals that while she was in a safety harness, the SEALs dropped down 60 feet on ropes without wires. Luckily she found that scene exhilarating, and not terrifying as the previously mentioned scene. 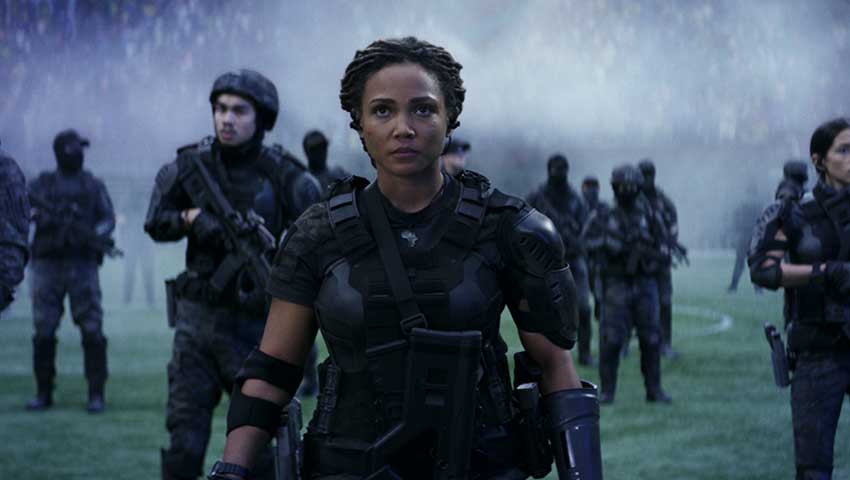 Their costars Matthew and Powers who play soldiers from the future did have to overcome their fear of heights for their action stunts.

Jasmine: I think was one of the first days as well when I-- It's my opening scene when I'm flying into the soccer field. I'm afraid of heights, terribly. I have to come in and command the stage and deliver this very important monologue that sets the tone for the entire movie. I just remember rehearsing at normal speed and flying down with this heavy gun in my hands, and you can't stop.

Once your feet touch the ground, you have to keep going. The camera is super close, so I had to stop before I ever hit the camera. I was really scared about that. Just the simple fact of overcoming my fear of heights was incredible for me. I remember Chris McKay a couple of times, he was like, "Jasmine, relax. Fix your face. It's okay. You're not coming to kill these people. You're coming to deliver a message of peace. Don't make them think that you're coming to kill them." Once I just found my breath and trusted Tommy, our stunt coordinator, and just got into the character and the gravity of the situation, it worked out pretty well, but I was terribly afraid. 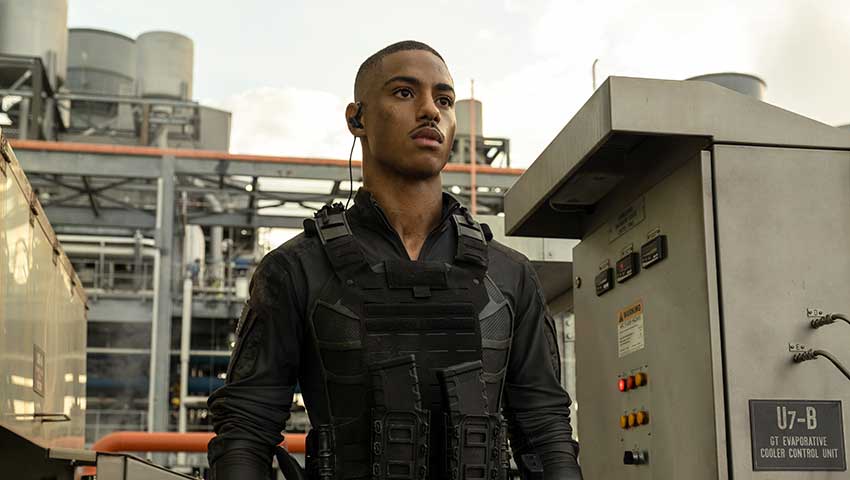 Keith Powers recounted his fear when shooting THE TOMORROW WAR.

Keith: Oh, yes, I had a bunch. The main one was being on top of the tower. We were like 100 feet up, and I had to shoot the 50 cal on top of it. I think that was crazy. I'm truly afraid of heights, but in-between takes, I had to stay up there because it would have taken too long for me to go down the ladder and come back up in-between takes, so I had to stay up there. I just remember it had an open surface, so you could see through it. I just remember looking down, and I was just like, "Yo, no, this is crazy."

Chris would check on me- Chris McKay will check on me and, and Chris [Pratt] would check on me too. Yvonne, you checked on me a couple of times too. I'm going to be real, I was like, "I'm good," but that was because- I think it was like the first or second day, I'm like, "I can't go out like that, I gotta get through this." I got through it, but it was terrifying, but it's weird because I love roller coasters. It's the weirdest thing ever. I love roller coasters, I guess I can't just be up high and sitting while moving really slow. It has to be quick. It was fun now looking back and looking at me shooting 50 cals, like, ‘I did that.’