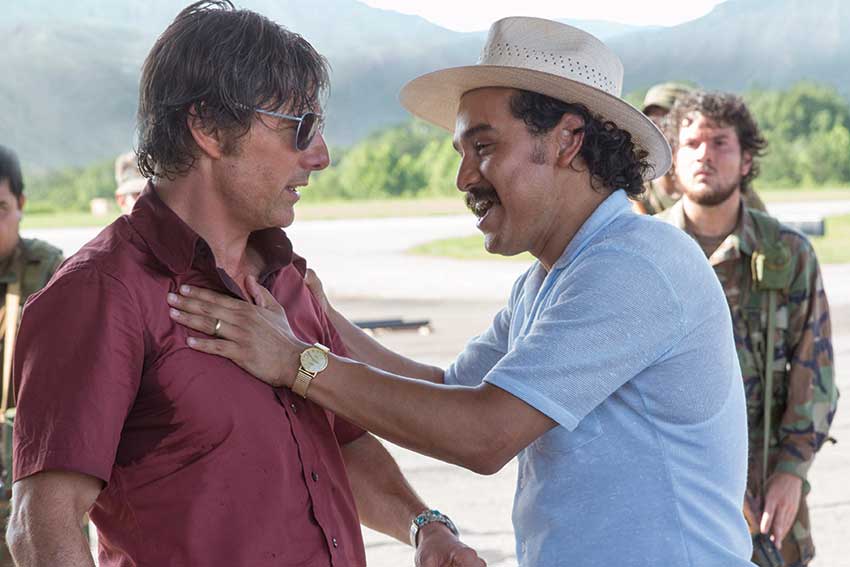 It’s not easy overpowering Tom Cruise's presence on screen but actor Alejandro Edda commands Cruise’s character in AMERICAN MADE. Edda explains to CineMovie how he got over his intimidation of acting opposite Cruise, a few funny Tom Cruise stories and adventures with the super star. The Mexican actor also shares his experience in the recent Mexican earthquake while he was visiting his hometown of Puebla.

Based on a real person, Alejandro Edda portrays Jorge Ocha, one of the founders of the Medellin drug cartel in the true story of an American pilot who became a CIA operative and a drug runner for the Colombian drug lords in the 80s. Barry Seal (Cruise) was recruited by the Medellin cartel to transport drugs from Colombia to the United States all while working covertly with the CIA in Latin America.

AMERICAN MADE is a dark comedy that retells the outrageous (and real) exploits of a hustler and pilot directed by Doug Liman. Much of the comedy comes from the absurdity of the true story. Although the Colombian drug cartel under Pablo Escobar was no laughing matter in real life, the film brings a light-hearted nature to Barry Seal’s adventure with the famous narcos.

Edda plays Jorge Ochoa, an actual person who along with his well-to-do brothers founded the Medellin drug cartel with his partner Pablo Escobar and Carlos Lehder. Edda tells CineMovie director Doug Liman didn’t want to bring a serious tone to the movie even with the subject matter. The actor who you may recognize from recurring roles in FEAR THE WALKING DEAD and THE BRIDGE, worked with the director to come up with something different.

“What can we do different than just playing your regular drug lord?," Liman posed the question to him. "In this case, it was hilarious. Most of the moments you see there, pretty much were improvised moments.”

Some of those improvised moments came just minutes before the cameras started rolling, according to the Mexican actor. It was a satisfying way of working and he bonded even more with the actors playing Pablo Escobar and Carlos Lehder because of that freedom.

Edda who lived in Colombia for seven months, actually saw the real Jorge Ochoa at a bull fight while living in that country. His father-in-law pointed him out. He went home and googled the famous narco. Ironically this was before he booked the job to play Ochoa. 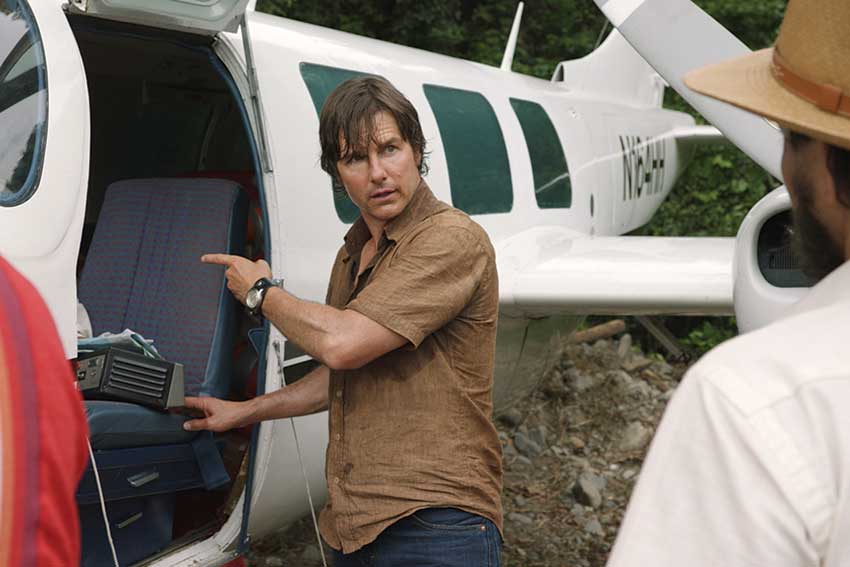 Edda also bonded with Tom Cruise. At first he wasn’t sure how working with such a mega star would work, but Cruise put the actors at ease and broke the ice by having dinner and rehearsals in his room. He was most surprised at his passion for filmmaking and acting given he’s been in it for decades. Soon Edda forgot about the star power and saw a “very humble person.”

“We became good friends in a way. He’s a very giving not only actor but person. Of course he’s very charismatic and very nice person and gentleman. He allows us to be very comfortable around him.”

Tom Cruise usually commands the screen, but Edda’s character is in the position of power in AMERICAN MADE so he had to bring this bigger than life energy to the role as Jorge Ochoa. Edda’s character is both charismatic and intimidating, and he often steals the show in scenes in which Tom cowers under his presence. Edda admitted the first scene he shot with Cruise in Colombia was extremely intimidating, but Cruise talked him through it.

“I remember I was really nervous and he helped me out a lot, confessed Edda. “He sat me down and he’s like, ‘Hey Alejandro, just talk to me like you and I talk. Like when we are here talking about our families what we like to do and sports. You are in control. You’re Jorge, the business man.”

Even after production wrapped, Edda wasn’t sure he brought his A-game or it would be possible to be on Cruise’s level until he saw the film in Mexico before the earthquake in Puebla hit. He was nervous watching it, but he was happy with the outcome.

Everyone wants to know what it’s like working with Tom Cruise so we asked Edda to tell us some funny stories from the AMERICAN MADE set which shot in Atlanta and Colombia.

Tom Cruise is a maverick in real life. Playing a pilot was right up his alley, and the experienced pilot did most of the flying in the movie. Edda told us when it was time to travel to Colombia after shooting in Atlanta, Cruise took the Aerostar plane called the hero plane in the movie, and flew himself down to Medellin, Colombia.

“That’s pretty cool. How cool can you get? With his aviator glasses on. I’m like ‘what is this?’ It’s a dream within a dream. Something like that.” 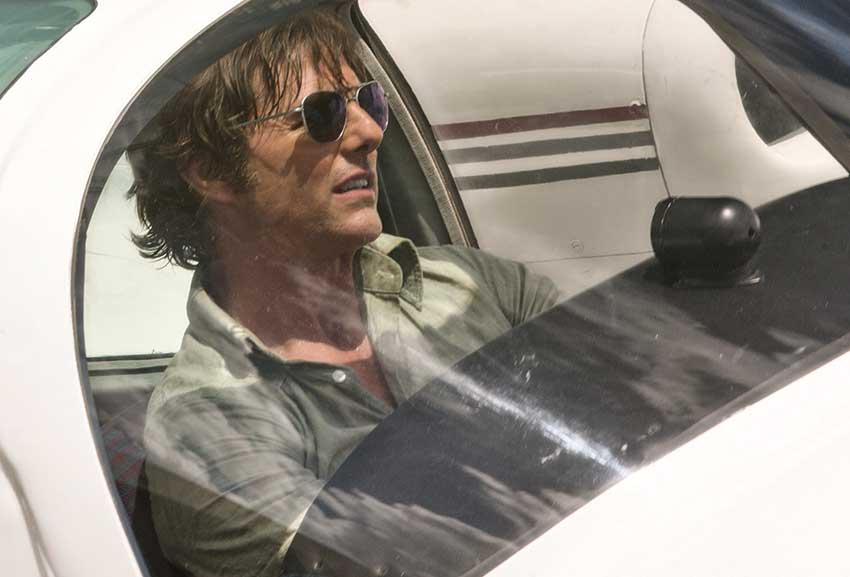 An another day, a scene called for Harley Davidson motorcycles and other men’s toys/gadgets to be unloaded from the plane. Turns out Cruise is pretty adept at riding hogs as well. Edda was curious to know if Cruise also plays sports in a conversation that went like this, according to Edda.

Edda: What sports do you play?

Cruise: Everything. I’m pretty good at every sport. (said humbly)

Edda: What are you bad at?

Edda says he was holding a golf club when Cruise pointed at it.

Edda: What this? Golf?

Cruise: Yeah, I’m not so good at that.

This guy can do everything, Edda told himself. “He’s like a superhero but hitting a golf club is hard for him to do. It was funny.”

Tom Cruise was also a prankster. While shooting a helicopter scene up the air, Cruise started playfully nudging Edda towards the exit where there were no doors on the helicopter.

“I’m like stop cabron. Stop! Stop!,” he told Cruise. “He was cracking up. We are in the air. This guy is crazy. Just messing with me. All in good spirit.”

Alejandro Edda was visiting his grandmother in Puebla, Mexico when the recent earthquake hit. He describes the experience as “scary” and while he’s not one to freak out, he thought the roof would collapse. Luckily the house withstood the shaking and his family were all okay, but he could see the devastation down the street and the lives lost. This tragedy was a wake up call.

“It’s an alarming time. We need to keep doing what we’re doing,” said Edda. This catastrophe helped unite our country and unite our people. We needed that wake up call. And now not only do you have Mexico suffering but you have Puerto Rico, the hurricanes, coping with the Korean war. The only thing we can hope for is that these things that are happening are out of our control can connect us more as humans instead of citizens or territories or races or genders. We need to come together as humans. And that’s what we need to call. “

With so many options to donate, Edda recommends donating to organizations that don’t allow any government intervention like Unicef, Red Cross and Diego Luna and Gael Garcia’s Omaze fundraiser.

AMERICAN MADE is now playing in movie theaters.