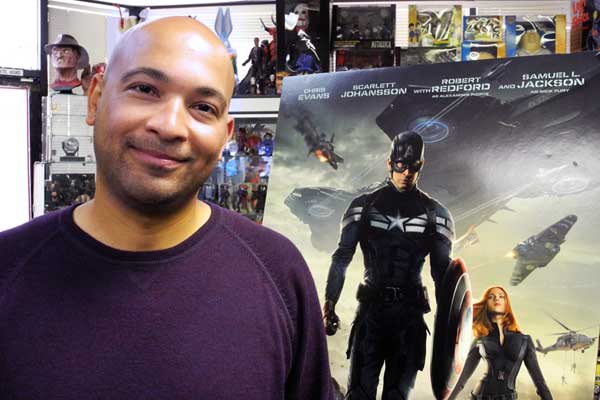 CAPTAIN AMERICA: THE WINTER SOLDIER actor Maximiliano Hernandez tells CineMovie why no one ever really dies in the Marvel universe, and he's giving us the scoop on his new role in the Michael Bay's new show "The Last Ship" on TNT.

Maximiliano Hernandez is a huge part of the Marvel world starring in the first Marvel One-Shot, "Item 47" as Agent Jasper Sitwell. He than reprised his role on the tv show "Agents of Shield" and he can now be seen in CAPTAIN AMERICA: THE WINTER SOLDIER.  CineMovie met up with the actor at the Frank & Sons Collector's Show in Walnut, CA where he was signing autographs for Captain America fans. He talks to us about working with Marvel on the different superhero franchises and how he was warned that he may be reprising his role in the future when he first signed on for the Marvel One-Shot. The actor says Marvel Studios has at least 15 years of movies planned.

Hernandez's next project includes starring this June in the Michael Bay-produced television show on "The Last Ship." Once again, he says he's playing a regimented character like his agent roles. He gives us the scoop on the plot of the new tv show.