Q:  Chris, was this a little bit intimidating stepping into this Jack Ryan role and was it different then playing Captain Kirk?

Chris Pine: Well, the good thing about the Jack Ryan stories is that the plot takes center stage. If you've done your job as the actor portraying Jack Ryan then your present enough to make an impact and let the story shine. We had a great story that David Kept came up with. With Kirk, Shatner made a deep impression within the zeitgeist that the role is a different thing entirely.

Q:  Kevin, you've been in Russian spy movies in the past. Has it been different doing this film this time around?

Kevin Costner:  I don't know if they have really changed. Our job is to entertain and find the rhythms that do that, the language of the day and try not to reinvent the wheel because spies are trying not to get caught and stop bad things. Hopefully the level of sophistication is going up.

Q:  How was it to bring the character of Jack Ryan into this age?

Kenneth Branagh: I loved the previous pictures and the books and I liked the cold war era and the big stand off between Russia and America and the new and old empires. One of the excitements about trying to re-imagine it was finding a world so that the interconnectivity of the financial world which was one that was both interesting and a bit of a brain teaser for me. Chris was very good at understanding it, thank god. To put that good moral conscious man in this modern world for me…that was pretty interesting. It was a huge, huge pleasure for me to work with these two (Chris and Kevin). It was a great pleasure to watch them think and deal with it in a layered way.

Q:  Chris, how much of the stunt work were you allowed to do and do you see franchise potential behind this film?

Chris: I did plenty of my own stunts and I enjoy doing them and you're able to live out your childhood fantasies. I was on a very large motorcycle for a long time that I probably wont do without a helmet on the streets of New York on the first day but it was a lot of fun. The most fun that I had was the scene that I had with the security guard in the bathroom towards the beginning of the film when I first arrive in Russia. In the last Star Trek I didn't get to do that much..I like the hand-to-hand combat stuff and I like the fact Jack who has had training in the Marines isn't a trained killing professional so it was kind of a McGyver moment on trying to figure out how to defeat the large bad guy and that was a lot of fun. Franchise wise I would love to do it again.

Q:  Kevin, at one point you where going to play Jack Ryan. At one point did you have to revisit the character to play the mentor role. And Kenneth nice job on the Russian.

Kevin: What I liked about the mentor role was that I wasn't a person at a desk or on a phone saying get the hell out of there. Kenneth was able to say I wanted to incorporate some of your skill set into this even though I'm a supervisor here that I could take the gloves off so to speak and become involved. So I thought that was unusual for the mentor role because they're usually back in Washington or in a big giant control room. In this instance they're close together and are trying to sort it out together and as the movie progresses you see that he just possesses a lot of intuitive skills.

Kenneth:  A dialect coach introduced me to the different variates of dialect. And I practiced as I walked the dog. 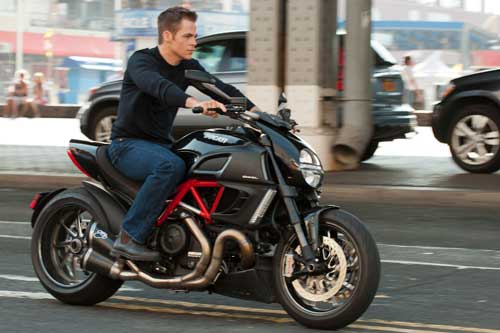 Q:  Chris, there have been Jack Ryan films before. Did you take anything from them? Kenneth, you play a Russian and made a film about the CIA. How did you approach it?

Chris: I always loved the series and the spy genre so I was well versed with the Clancy universe. I did watch the films growing up and looking at the character and what I most enjoyed was how Alec and Alex Harrison portrayed the character. With Alec in The Hunt, what he does is bring this intelligent, analytical character who knows what he knows and is not afraid to say it. Harrison with his tweed coat and swagger, he's the humble intellect, the classical reluctant hero. I thought that somewhere within that I could begin looking at the character.

Kenneth: When this came along it was a combination of things. I knew Chris was involved and very much wanted to work with him. I wanted to make a movie...I grew up loving them...a grown man passing information in a cinema or two men meet on a bench at night in Moscow and talk about the fate of the world and combine action with these great actors.

Q:  Kenneth and Kevin do you think it's different to be a mentor in 1984 compared to 2014 and who mentored you guys?

Kenneth: I think if there is openness of communication then the timing doesn't really matter. Sometimes the mentoring doesn't really happen directly. It just happens intuitively. There were lot of moments where there was shared communication about scenes and how they would be approached. It was an honest collaboration. Watching these two together was great in terms of people trusting each other and when they're very good at what they do. When their egos are at the service of the better idea and what is right for the scene. When you see that generosity at work it's really a thrill to be a part of. I learn a lot from people much younger than me as well as people much older then me.

My greatest mentor was the guy that was the principal at the drama school I attended. He was on 6 or 7 pictures that I made as my acting coach. He's a very eccentric English guy. We were making the film Hamlet and I was doing the 'to be or not to be' scene and I was very nervous and I said to him, 'This is the acting Olympics and I'm doing the most famous scene in Western dramatic literature and if you have any notes for me I would like them very early on please.' So we started doing it and I did take one and said 'so how was that?' He said, 'I don't have anything to say.' So then I did take two, then take three and still didn't have anything to say. So I told him, 'I think I'm getting it and going to call this a print very shortly.' Then he said, 'I think you should do another one.' And had nothing to say at that moment. So we get to take 6 and I tell Hugh, 'I think we might have it do you have anything to say?' He said, 'Yes, yes, yes, the rhythm of it is absolutely extraordinary understanding of the language, the pacing marvelous and the timing really extraordinary.' So I asked him what's the problem then. He said, 'I simply don't believe a word you're saying. You have absolutely no sense of the man. It's phony and fake. You really have to do another one.' So with a guy with those balls, he was great help. He was my greatest mentor. 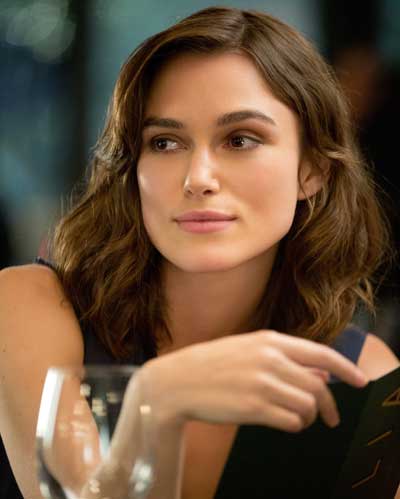 Q:  Chris what was your chemistry like with Keira Knightly?

Chris: I don't know if I ever had more fun with an actress. She could not have been anymore professional. She's younger than I am and has probably done three times more films than I have. She would just show up and was super smart, and friendly, charming, and in the moment. There was zero drama with Keira Knightly. She took her job really seriously so she would ask the right questions and I think what I respond more than often is just intelligence and she was just sharp. She has been doing this much longer than I have, and I just felt like an apprentice.