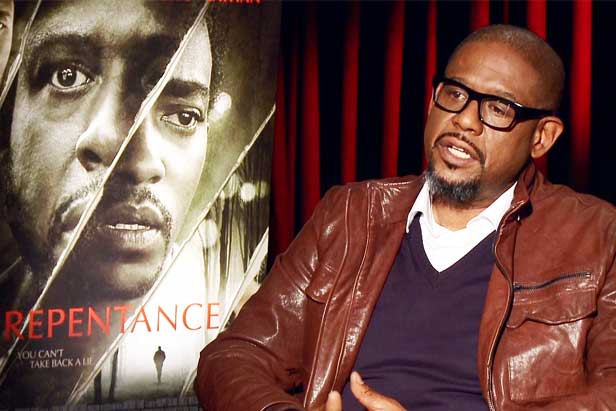 Forest Whitaker plays a disturbed individual in REPENTANCE. He's seeing dead people, mainly his mother. The actor and producer of REPENTANCE sits down to talk about the difficulty of playing a disturbed person, and commenting on the death of Philip Seymour Hoffman.

Forest Whitaker not only stars in REPENTANCE with Anthony Mackie (Captain America: The Winter Soldier) and Mike Epps  but he produced the film as well. In REPENTANCE, Whitaker is Angel Sanchez, a troubled man seeking the help of Carter, a life coach (Mackie), for answers to his mother's untimely death, but things take a turn for the worse when Carter becomes his prisoner.

In our Q&A with Whitaker, he talks about getting the film made and what attracted him to the thriller, which opens February 28th.

Q:  Forest we thought after The Last King of Scotland that you couldn't get more freighting.
Forest: But this is a different kind of freighting.

Q:  Your company also produced this film.
Forest: Yeah we have been able to really identify some really good projects. We definitely will be doing more and more films as the years progress. We're just trying to talk about the human experience and put those stories out and let people see the breath of who we are.

Q:  Some of those scenes were intense, it's like a buddy film gone wrong.
Forest: Well Anthony Mackie's character isn't really friends with me, he helps me out for the wrong reasons then gets trapped by me. The movie is interesting because it deals with all the trappings we have within ourselves that we don't ever let out. All of our memories and out past pains and the mistakes that we made, then we have to confront them and I force him to confront them obviously.

Q:  Forest, did you always want to play the role of Angel?
Forest: Not necessarily, when we were trying to figure out this movie and what was the right way to make this movie. Philippe Caland (director) always wanted me to do it. At one point he talked to be about playing the life coach. I never acted in anything I've directed but I have produced a number of films and I have acted in some of the movies I've produced. Usually with first time filmmakers and pushing a move forward I have played a small role but never the lead.

Q:  How long did it take you to shake Angel after you shot this film?
Forest: Yeah When I watched it I didn't realize I was like that. It wasn't too long it was about a month or so of shooting. I've played a schizophrenic character before in a film with Renee Zellweger and that took me about a year to get back to normal. That was really hard for me. That made me decide I wouldn't do it again. Playing with my mind, rewiring my mind because you can rewire your mind. If you go too far you have to go through the journey of rewiring it back.

Q:  What was it working with the rest of the cast?
Forest: As a producer I had to cast the film with the other producers and the director and some of these actors I have worked with before and some of them I just only knew off. With Anthony I think we were in Italy when I first spoke to him about this part. We were at a film festival. So I was trying to find the right group of people to do the movie.

Q: After shooting the film were any of the actors surprised and said dang I didn't know we were going to do that.
Forest: We were surprised a lot. Michael he's really talented he played a character that he's never done like before. All three of them together was magic and you could feel the magic being put together. Anthony wasn't expecting to get wrapped up in plastic, that was the tough part, his part.

Q: This film also address the spiritual world with you seeing your dead mom.
Forest: The film is based on spiritual principals in the original film it's about cause and affect so it was about dealing with that. So the reason I'm able to find this guy (Anthony Mackie) is because I go to a spiritualist he says these words that resonated in my head. So when I see the cover of his book I know that that guy has something to do with it. So the spirit realm is not ignored in the movie, it's there. My mother that you see constantly throughout the film is motivating me in some ways to do certain things. Now his mom stuff you can write in the back of your head it's his imagination or thoughts but thoughts carry a weight, thoughts have energetic feeling, thoughts exist as a whole thing. So if you look at it as a spirit from another realm or if you look at it as projected from my own internal mechanism it still exist. So what's great about the movie is that it doesn't turn into vengeance because when he finds truth he admits it and it's acknowledged, then he's able to reconcile with this person or at least with himself in order to be able to go on.

Q:  So can you explain what happened in the end?
Forest: Was it frustrating? There have been incarnations of the cut that have been, where you can see more clearly what happened. You can at least see the direction of the weapon was shot.

Q:  We lost Philip Seymour Hoffman what would you say about his loss?
Forest: First, it's sad and tragic. I don't know how to go to the source of what was the motivation that caused him to have that pain to do certain things that ultimately made us loose him. So I can't really comment on that, I can say we need to be more mindful of illness and have other things to substitute in your life that make you feel whole. There has to be some way to help people heal. So as an artist, as a person, as a symbol of success and fallen loss makes me sad because I think of all the others. It's a reminder to us that we have to be mindful and care and what we can do in our own future and in our own lives.