THE QUIET ONES' Sam Claflin and Olivia Cooke Interview 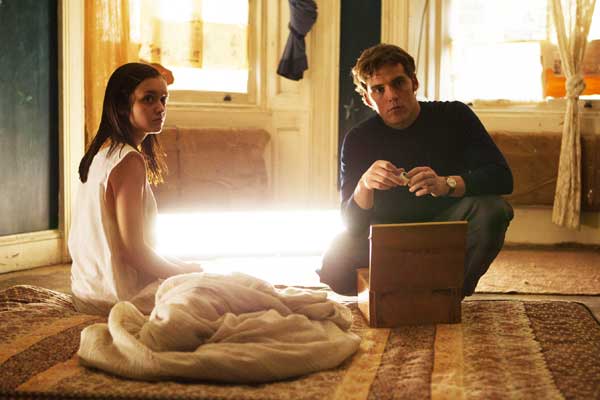 Olivia Cooke, Sam Claflin and Jared Harris are talking about what they liked most about working on the new horror film THE QUIET ONES, and Cooke is opening up about what's next for her goody-two shoes character on "Bates Motel" while Sam Claflin's is loving his role in next Hunger Games movie.

Hammer Films is back and ready to recapture the horror genre with its compelling new film THE QUIET ONES, helmed by director John Pogue (Quarantine 2: Terminal). THE QUIET ONES plunges into one of the horrors genre’s most haunting subjects: supernatural possession. Inspired by actual events, the film’s chilling plot centers around a girl named Jane Harper, played by Olivia Cooke ("Bates Motel"), who’s possessed by a dark and emotional demonic force called Evey.  The events take place in 1974, when a youthful cameraman (Hunger Games actor Sam Claflin) works with an Oxford professor ("Mad Men’s" Jared Harris) to document a series of experiments done on Jane Harper in an attempt to uncover the truth about what lurks within the tormented girl. Watch Trailer

When Cinemovie sat down with the "Bates Motel" actress Olivia Cooke she looked fresh faced and classy in her gunmetal, grey dress. This was the antithesis of how she looked in THE QUIET ONES.  For most of the film, we watched the black haired, pale-faced Jane Harper through a slot in a door as she brushed her doll’s hair and did other weird things possessed little girls do. Being that the film was shot two years ago, Cooke was 18 at the time and was experiencing her first role in a feature film.

“It was my first film. It shocked me how easy it was to get into that character without having to do too much. Being in that costume and that room really helped. I think at first John didn’t want anyone to speak to me but that kind of quickly changed because I’m so chatty anyways.”

Despite her success in Hollywood, Cooke still lives with her “mum” in Manchester and can’t see herself making the move to L.A. anytime soon. After gaining exposure from her role on the T.V. series "Bates Motel", the young actress admits that she finds it strange when the people she went to school with have become awkward around her. As she heads into the third season of the television series, Cinemovie asked Cooke what’s in store for her sweet spirited character Emma. Will she take a dark turn?

“I have no idea. I’m having coffee with the creator Carlton Cuse on Thursday, so I’m going to try to wean as much information out of him as I can. I probably won’t be able to tell you. But maybe, if there’s not a little record-ey thing there.”

Being a huge fan of the horror genre, the actress was immediately drawn to THE QUIET ONES for the sharpness of the story and it’s homage to classic horror films from the 70’s.

“It focuses so much on relationships and I’ve never seen in a horror movie such a complex love triangle. It’s a possession movie but it’s also two men vying for the possession of one girl in the center of it.”

One of the men involved in this love triangle was the young cameraman, Brian McNeil, played by Sam Claflin. After looking over the script, The Hunger Games actor became attracted to the role and the idea of playing a part in a Hammer horror film. While growing up, Claflin played soccer and was determined to play professionally until he injured his foot and had to re-evaluate his future.

“I broke my ankle and I had time to sit back from it and realize that maybe it wasn’t what I wanted to do for the rest of my life. I realized I enjoyed acting and it took over really.”

Shortly after THE QUIET ONES wrapped, Claflin landed the role of Finnick O’Dair in the popular Hunger Game Series.  Claflin noted that he never really felt comfortable voicing his opinions as an artist until THE QUIET ONES.  He got to play a part in the collaboration process, being that it was only a cast of five.

Sam Claflin is also talking about his highly-publicized role in The Hunger Games Catching Fire and the upcoming Mockingjay: Part 1.

“It was such a different experience. Different than anything I’ve ever done. Catching fire was the best of everything. The cast, the crew, everything. As an actor, playing a character like Finnick, it’s really a dream come true."

Jared Harris (Mad Men) went on to praise his young co-star and the camaraderie built among the cast.

“I was excited about working with him. He’s really fun and positive and has a bright light about him.”

“We had two weeks of rehearsal before we started shooting, all five of us got together. It was really like having a small theater company, preparing this strange little performance art piece that people were going to film.”

THE QUIET ONES possesses theaters this Friday!