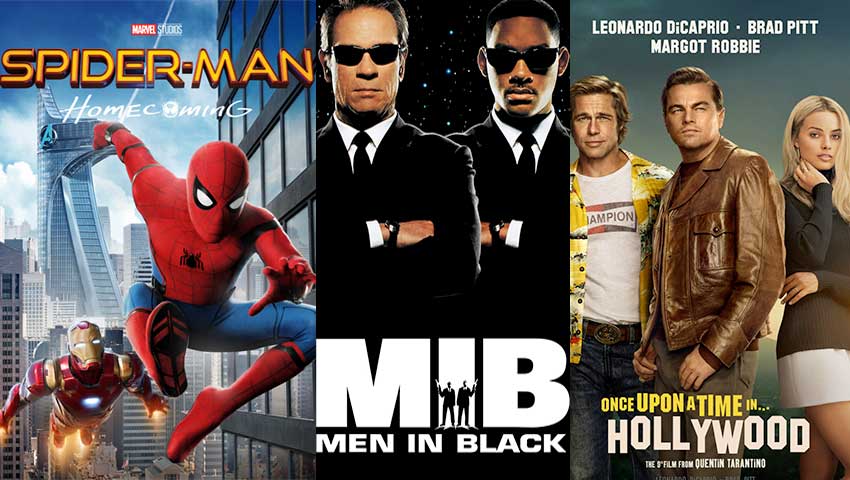 Sony Pictures announced the historic studio lot in Culver City, CA will host movies in a drive-in setting. Sony will be screening their library of iconic movies like KARATE KID, GHOSTBUSTERS, MEN IN BLACK and most recent films like ONCE UPON A TIME…IN HOLLYWOOD, BLOODSHOT, BABY DRIVER, SPIDER-MAN HOMECOMING and FAR FROM HOME among others. Tickets will be sold through Atom Tickets (atomtickets.com).

Sony Pictures is the first studio to host a drive-in experience. The news release (read below) states it's a high-end dual big screen drive-in that will accommodate approximately 75 cars (with all public health and safety requirements) in the studio’s Thalberg parking lot on Fridays, Saturdays and Sundays starting August 14.

The Culver City studio has a rich history. In 1919, producer Samuel Goldwyn established his Goldwyn Pictures there. A few years later, a Metro-Goldwyn-Mayer merger ousted the producer. Columbia Pictures was created at that location. In the 1980s, MGM merged with United Artists to become MGM/UA. Turner Broadcasting purchased United Artists, and MGM moved off the lot. Lorimar Telepictures established themselves at the studio until Sony Corporation bought Columbia Pictures in 1990. Greta Garbo, Clark Gable, Spencer Tracy and Joan Crawford and child stars Elizabeth Taylor, Mickey Rooney and Judy Garland called the studio home early in their careers as contract players. Film classics like the GRAND HOTEL, THE THIN MAN, MUTINY ON THE BOUNTY and The WIZARD OF OZ were produced at the famous lot.

Porsche Cars North America is serving as the official sponsor of the drive-in experience. Porsche will offer their latest products for guests to view like the first all-electric sports car, the Taycan, and the new Cayenne Coupe.

Below are the film titles screening at the Sony Pictures lot.

Atom Tickets will exclusively power ticketing for big-screen showings of Sony Pictures library titles including GHOSTBUSTERS (1984), KARATE KID (1984), MEN IN BLACK™ (1997), ONCE UPON A TIME…IN HOLLYWOOD, SPIDER-MAN™: HOMECOMING, JUMANJI: THE NEXT LEVEL, and others

Culver City, CA – August 12, 2020 – Sony Pictures will be the first major studio to host a high-end dual big screen drive-in experience at its studio lot in Culver City. Located in the studio’s Thalberg parking lot, the drive-in will begin its run Friday, August 14 and will showcase several Sony Pictures library titles. In lieu of a traditional premiere, a screening of upcoming romantic comedy -- Tristar Pictures/Stage 6 Films’ THE BROKEN HEARTS GALLERY -- will also be hosted in this outdoor space.

Porsche Cars North America will serve as the official automotive sponsor for the drive-in experience where guests will be able to view the latest product offering from the automaker, including its first all-electric sports car, the Taycan, as well as the new Cayenne Coupe.

All showtimes will begin at 8 p.m. PT and the lot will hold approximately 75 cars. Screenings will be held Fridays, Saturdays, and Sundays and the price of admission will be $30 per car.

The drive-in experience, which will follow all public health and safety requirements as mandated by the Los Angeles County Department of Public Health and the City of Culver City, will offer screenings of the following titles:

Drive-in ticketing will be powered exclusively by Atom Tickets. Moviegoers can purchase tickets online at atomtickets.com or on the free Atom Tickets app available in the Apple App Store and the Google Play Store. For more information, moviegoers can visit sonypictures.com/drivein.

About The Broken Hearts Gallery
What if you saved a souvenir from every relationship you’ve ever been in? The Broken Hearts Gallery follows the always unique Lucy (Geraldine Viswanathan), a 20-something art gallery assistant living in New York City, who also happens to be an emotional hoarder. After she gets dumped by her latest boyfriend, Lucy is inspired to create The Broken Heart Gallery, a pop-up space for the items love has left behind. Word of the gallery spreads, encouraging a movement and a fresh start for all the romantics out there, including Lucy herself.

About Porsche Cars North America, Inc. | One Porsche Drive, Atlanta, GA 30354 USA
Established in 1984, Porsche Cars North America, Inc. (PCNA) is the exclusive U.S. importer of the Porsche 911, 718 Boxster and 718 Cayman; Macan and Cayenne; Panamera; and Taycan. Headquartered in Atlanta, Georgia, since 1998, PCNA is also home to the first Porsche Experience Center in North America featuring a module-based 1.6 mile driver development track, business center, and fine dining restaurant, 356. The company operates a second Porsche Experience Center near Los Angeles. That 53-acre complex features a driver development track with eight educational modules totaling 4.1 miles, a business center, and Restaurant 917. PCNA supports 193 independently owned and operated Porsche dealerships in the U.S., including supplying parts, service, marketing, and training. They, in turn, work to provide Porsche customers with a best-in-class experience that is in keeping with the Porsche brand's 70-year history of leadership in the advancement of vehicle performance, safety, and efficiency. PCNA is an indirect wholly-owned subsidiary of Porsche AG, which is headquartered in Stuttgart, Germany.

At the core of this success is Porsche's proud racing heritage that boasts some 30,000-plus motorsport wins to date.